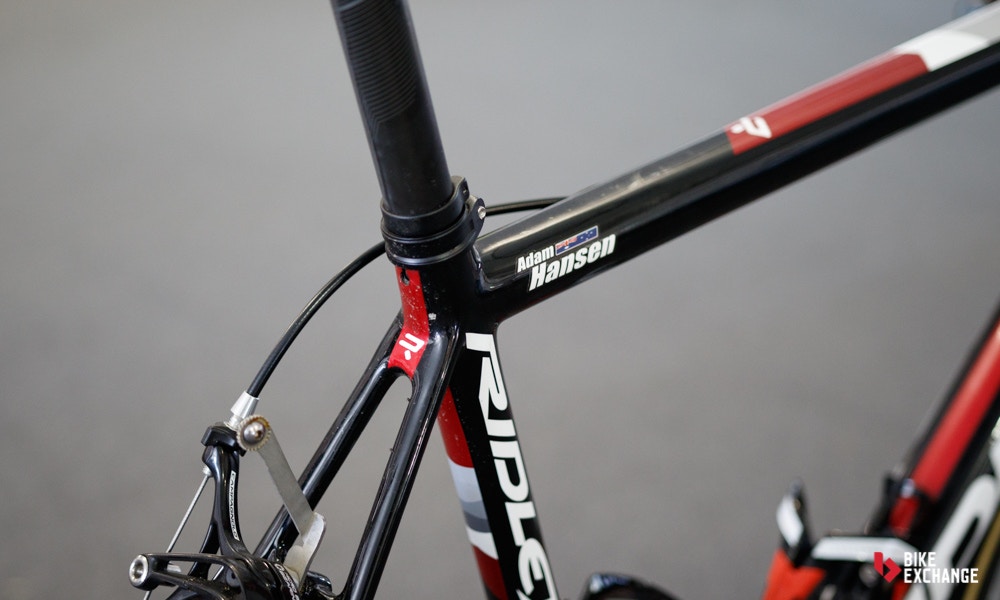 Adam Hansen is a unique bike rider, he has won multi-day mountain bike races, a National time trial championship, stage wins at the Giro d'Italia and Vuelta a Espana, and currently holds the record for the most consecutive Grand Tours completed. If that wasn't enough, the Lotto-Soudal rider also makes his own bike shoes known as 'Hanseeno", and has even developed a software program that is used by a number of professional teams to coordinate logistics. The new Helium SLX that the Australian is now riding was revealed at the Tour Down Under with some significant changes from the previous Helium. The new frame is said to be lighter and also stiffer, significantly so according to Adam speaking at the bike's launch. A medium frame weighs just 750grams, putting it right up there with other lightweight frames, and thanks to a beefed up headtube and straight-bladed front fork, a claimed 15% increase in front-end stiffness is also achieved. A PressFit 30 (PF30) bottom bracket, revised carbon layup and new tube shapes are all other contributing aspects on how the stiffness to weight ratio was improved.

The frame features internal cable routing, with the rear brake cable running diagonally through the top tube (in on the right, out on the left) to prevent the inner cable from rattling on the frame. Adam rides a size medium frame with a super long seat post (that is flipped with his seat slammed forward), creating a seat height of approximately 83.5cm. Considering he is 1.86m tall, this is a small frame for someone of his stature. Typically, a rider of his height would be on a large or even extra-large frame, but Adam's goal is to get as low and narrow as possible to reduce his frontal profile and make riding into the wind easier. This might explain why he also has two seat clamps in place to make sure the saddle won't ever drop. Adam's cockpit set-up is considered extreme, even by pro standards who typically adopt more aggressive positions than the rest of us. His handlebars from Deda are just 38cm wide, which is narrow enough, but when you consider Deda measure from outside to outside, rather than the more traditional centre to centre, they are closer to 36cm bars as we know them. The standard handlebar width amongst pros is 42cm, which gives you an idea of how far removed from the 'standard' Adam's is. His stem, also from Deda, is equally extreme, 140mm in length with an enormous negative angle to get him as low as possible. This helps explain his medium-size frame choice, if he were to go up a size, he wouldn't achieve his extreme saddle to handlebar drop. The uniqueness of Adam's bike doesn't stop there, his drivetrain is equally as interesting as his cockpit set-up. Lotto Soudal are sponsored by Campagnolo and so Adam runs Super Record EPS electronic shifting, but due to his choice of long cranks, the team has had to be creative in order to keep him riding an SRM power meter. Adam rides 180mm length cranks, far longer than any other rider in the pro peloton. To give you some perspective, most riders will typically have either 170mm or 172.5mm cranks, taller riders possibly extending that to 175mm.

As the team's usual Campagnolo SRM isn't an option due to the length of the cranks, Adam is riding what appeared to be Lightning carbon cranks with an SRM spider and non-Campagnolo chainrings. Most likely these are a short term solution until SRM's new lightweight carbon crank, that we have seen on Bahrain Merida at the TDU, becomes available. The rest of Adam's bike is somewhat 'normal' by comparison. Campagnolo provides the wheels for Lotto Soudal, Adam opting for the shallow Bora Ultra 35's which are paired with Vittoria Corsa Graphene 25c tubular tyres. Bottle cages are from Elite, there's a K-Edge chain catcher for extra security and a race number plate on the rear. Adam's Selle Italia saddle is pushed forward as far as possible on a flipped seat post, helping him achieve a super low position.

As you can imagine for a guy that creates his own shoes and develops software in his 'spare time', Adam is particularly fastidious when it comes to his bike set-up and is famous for his weight weenie tendencies. So much so that his bike has weights added to beneath the bottom bracket to get it over the 6.8kg minium weight limit. For more pro bike action, be sure to check out our Pro Bikes of the 2017 WorldTour feature where we take you through what's new, what's been changed and what's stayed the same for the 18 WorldTour teams in 2017. 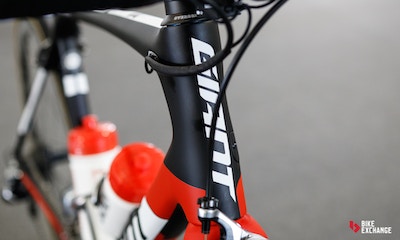 Get an up close look at the flagship bike from the world's largest bicycle manufacturer in this pro bike feature, the Giant TCR...