Contador No Longer a Contender 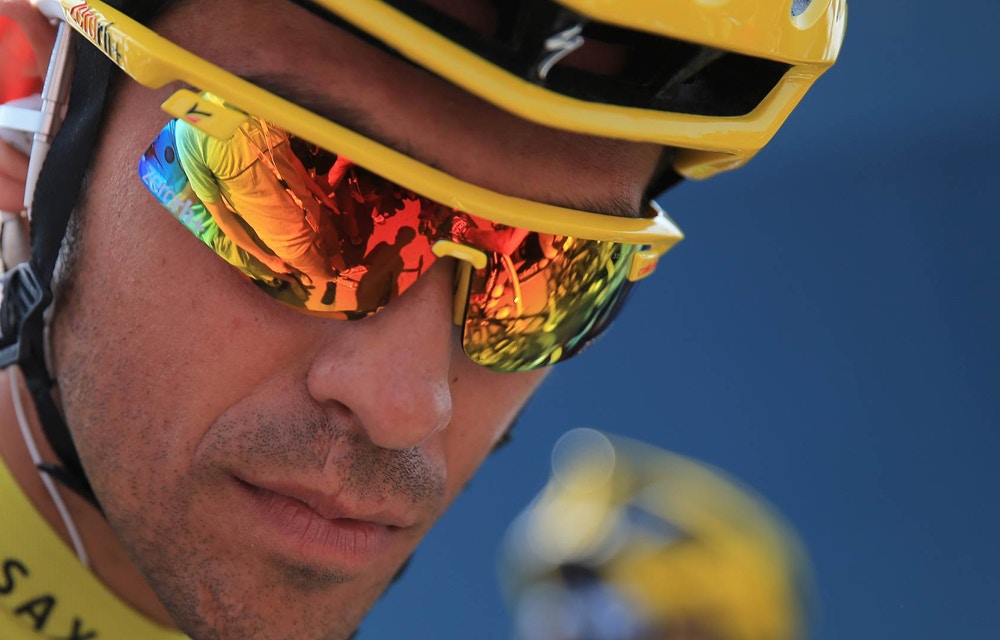 Watch this face. Clearly yellow is this man's colour, and he'll be gunning for it during this year's Tour de France.

With some of the most impressive palmares in the history of cycling (as well as liberal lashings of controversy – see below), and multiple Grand Tour wins already under his belt, this is surely the man in everyone’s crosshairs for this year’s Tour de France?

Born in December 82 in Madrid, Spain, Alberto grew up and lived all his childhood in Pinto, a small village to the south of the country’s capital. The third of four children, Alberto was a natural talent when it came to sport and showed particular ability in football, or soccer as we know it, and athletics. But his older brother is to be thanked for introducing young Alberto to the sport of cycling and the rest, as they say, is pretty much history.

Contador is currently racing for Tinkoff-Saxo.

The ups and downs of Contador’s cycling career

So what have been the key stages in cycling that have made Contador the name on everyone’s lips? Let’s have a look at the highs – and lows – of Contador’s cycling career thus far.

Contador debuted as a professional cyclist, singing with ONCE-Eroski. This same year he won the individual Time Trial in the last stage of the Tour of Poland.

A memorable year for Contador, but sadly for all the wrong reasons. He lost consciousness during the Vuelta a Asturias and collapsed. He was later diagnosed with cerebral cavernoma, a congenital brain condition requiring surgery. Contador’s health – and career – were on the line.

The Comeback Year. Against odds Contador returned to racing and took out the queen stage of the Tour Down Under.

The Govenrment of Kazakhstan assumed sponsorship for his team, and thus Contador found himself racing for Astana (named after the country’s capital city). That same year, Astana was excluded from the tour de France. So what did he go and do? He went and won the Giro d’Italia and Vuelta a Espana. As you do… Winning the Vuelta gave Contador immediate and incredibly exclusive entry into a formidable group – cycling luminaries to have won all three Grand Tours at least once. Contador joined Anquetil, Gimondi, Hinault and Merckx as a ‘Triple Crown’ member.

Lance Armstrong had come out of retirement and joined Astana and the Tour de France went into overdrive with interest. Two leaders? In the same team? It was a case of two chefs in the kitchen. Contador won the Tour de France, but the race was not without its tensions. Lance left to join Team RadioShack.

Contador also made a move, joining Bjarne Riis’ SaxoBank-SunGard team. He won another Tour de France as well as Paris-Nice. But in August of this same year Contador’s urine samples from the Tour were found to have traces of clenbuterol. Contador defended himself, claiming the traces were from meat tainted with a substance used to fatten up cows. Legal proceeding ensued.

The Spanish Cycling Federation declared Contador innocent, and he was free to race again. He wasted no time and took out the Giro d’Italia and came fifth overall in the Tour de France.

Contador won the Vuelta a Espana and the Milano-Torino. But the Court of Arbitration for Sport (CAS) finds Contador guilty of doping and stripped him of his 2010 Tour de France victory. He was served a two year ban, which was back-dated from January 2011.

Could we see another Tour de France win…?