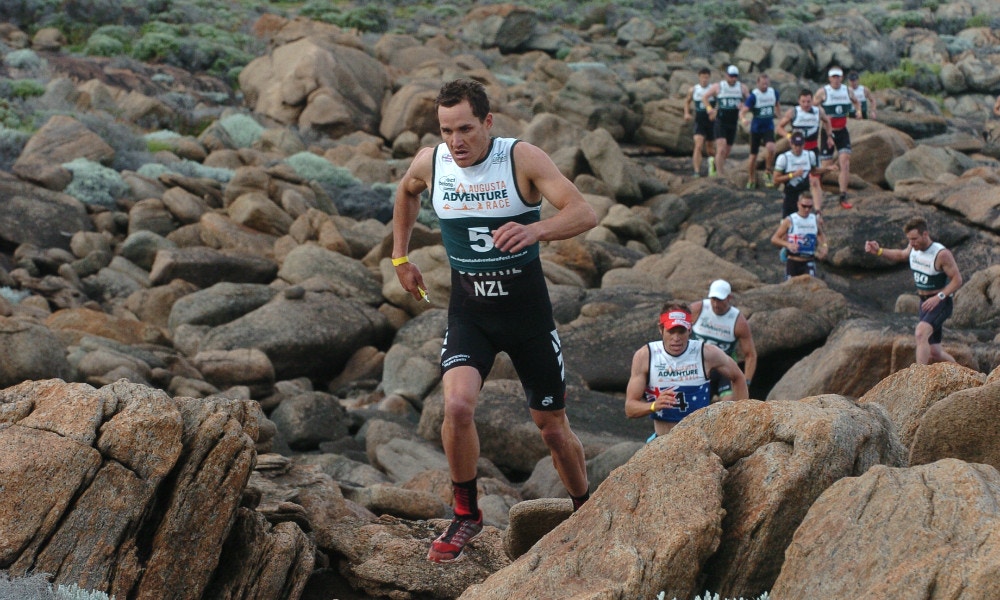 The biggest adventure race in the world happens right on our doorstep.

And one man, Braden Currie, is expected to be leading the pack.

Having won the race for the last three consecutive years (and placing third in 2011 for his debut), Braden will be every bit the hunted, as opposed to the hunter, when racing gets underway on 7th November.

Featuring a 12.5km coastal trail run, 1.9km ocean swim, 13km ocean paddle, 26km mountain bike and 2.5km run, the race is part of the Augusta Adventure Festival and will this year be celebrating its tenth anniversary.

We caught up with Braden to find out a bit more about his life as an athlete, and what makes the Augusta Adventure Race so damn incredible. Where was life taking you before multisport, or has it always been an inherent part of your life?

I began my career as a mountain bike guide and a climbing instructor. Then we had a child and I guess multisport just became a focus after that.

Your list of podiums is incredible – I got fatigued reading through all your successes. What has been the stand-out event?

It would have to be the first time I won Coast to Coast (one of New Zealand’s premiere multisport events). That was the biggest break-through in my career. It gave me clear direction and showed me that I could be the best.

What is so addictive about multi-sport?

It’s the variation in what we do. I get to train not in one, but several disciplines. I get to train – and race – in some of the most inspiring locations in the world. So one moment I could be on a bike racing around remarkable mountains and then next I might be in a kayak paddling over some majestic lake. It’s amazing. See also: Is your taper ruining your race?

Do you have a favourite discipline or does that chop and change?

Based on pure enjoyment I would have to say mountain biking, followed fairly closely by mountain running.

What bike do you ride?

I’ve been with Specialized for four years and I ride an S-Works Epic 29er World Cup.

You’re headed back to Western Australia to defend your championship title, which you’ve had the last three years straight. Is it more stressful being the hunted, or the hunter?

For me it’s definitely more stressful being the hunter. The first few times in this race I was the underdog. Multisport was reasonably new in my career. Now, I have a solid mental step-up. I know I can race this course and I know I can race it fast. So who’s your main competition this year?

OK I haven’t looked into it too much just yet. I am packing to head to Maui tomorrow for the Xterra Worlds, so I’ve been focused on researching that firstly. Once I’ve raced that then I’ll probably have some time at the airport to seriously start looking at the field for WA. I know my fellow Kiwi Sam Clark is heading over the ditch to race – he will be a strong competitor.

You just mentioned you’re off to Maui. Can you give us an idea of what an average month would look like at the pointy end of your year?

I don’t really have any down-time during the year. This year I will have raced 16 events – so I average more than one race a month. Last year I spent 8.5 months overseas and this year my family and I were in the US for 5.5 months. We got back three weeks ago and now tomorrow, as you know, I am off to Maui. Then after that I am over to Aussie.

Back to the Augusta Challenge. Tell us about the course

Well the start line is at the Peninsula and it’s really rugged, beautiful, exposed coastline. You race right into that beauty with the coastal run. Then the swim takes you across reefs, so it’s reasonably shallow and no sharks, which is a bonus.

So you’d still race if there were sharks?! OK – back to the course description!

After the swim and you’re into the kayak. There’s some pretty fun sections here, especially when you have to come out of the river mouth and get the break. Then onto the mountain bike leg, which has some great single tracks and fast, powerful sections. A quick 2.5km run and you’re at the finish line. The course remains unchanged year on year so I know it well.

Well, all the best defending your cracking title. It’s an impressive feat and we look forward to seeing how you go!