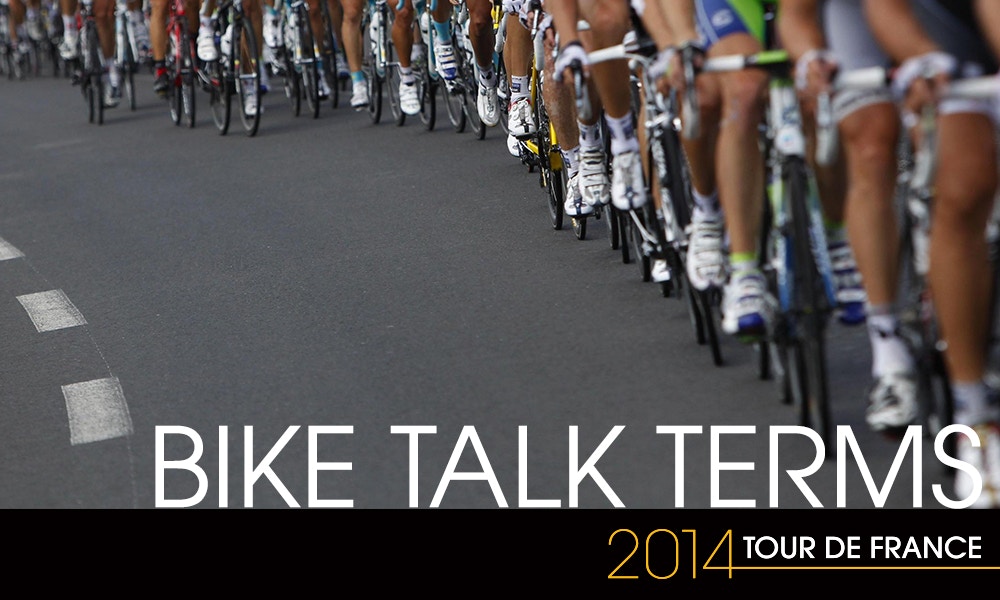 Have you caught the Tour de France fever and now want to get into riding? Here’s a few key terms (there are plenty more!) that will not only see you through the Tour commentating, but life on the bike in general. Happy riding!

When the heart and lungs work from physical exertion with steady access to oxygen – designed to improve the efficiency of the body’s cardiovascular system to carry and absorb and transport oxygen.

You will hear this term used during the Tour de France’s penultimate stage – the Individual Time Trial (see ITT below). This refers to the cyclist assuming a far more aggressive position on a bike designed specifically for time trials. E.g. – riding a TT bike supposedly makes the cyclist ‘more aero’.

The highest point of an ascent. Come the mountain stages, these apexes will make the hairs on our arms stand up – and we’re watching from the TV!

We’re looking forward to seeing a lot of these during the Tour! When a cyclist launches an attack, they essentially make a concerted move to assume the lead and/ or to gain more distance between themselves and their competitors.

You don’t want this to happen. To run out of energy – to hit a wall and no longer be able to perform.

Don't get the wrong impression! Too little fuel (either fluid and/or carbohydrates) causing the cyclist to lose all power to exert and all energy.

One or more cyclists who surge ahead of the bunch or peloton.

A group of riders. Although this can be any size, we’d be inclined to say a bunch is four or more riders riding together.

The number of revolutions the pedals make per minute. So climbing a hill for example will see a much slower cadence than rocketing down a sprint straight.

Direct translation from French means ‘hat’ but it is a term used to express respect at someone else’s achievement or win.

Riders who for whatever reason were not part of a break-away group and are now trying to catch up with them.

To be avoided at all costs! In short – falling off the bike.

The team boss (not a rider).

Again – something to avoid. Did not start and did not finish.

A worker rider – someone whose job is to support and serve the lead rider.

When a cyclist rides directly behind another (see ‘sitting on wheel’) to benefit from the leader blocking the wind (which therefore makes it easier for all cyclists following).

The French word for a stage (see below).

A big red banner marking the final kilometre of a race.

When a cyclist is super crouched down on their bike and descending. Many cyclists will crouch so far down that their bum is past and slightly lower than the saddle.

General Classification stands for the overall leader in a race. In short – the most coveted position to be in!

Basically any climb that is too out of this world to categorise – a tough day in the office!

Cyclists race one at a time with the aim of covering a set distance in the fastest time possible. Normally in the Tour cyclists ride as a peloton, or in break-away bunches. Time trials make it impossible to rely on others to assist your performance – it is a match between the cyclist and the clock.

King of the Mountain – the fastest climber.

The point at which exercise becomes so intense that lactic acid begins to accumulate in the blood stream.

Oh this is when all the fun and games start! A lead out cyclist rides flat out for the benefit of their team leader, or other team mate, who is riding behind and thus benefiting from the slipstream. At a certain point, the lead out moves to the side, allowing the follower to advance at an even greater speed and hopefully win the race.

Occurs in a time trial environment and refers to the cyclist in front (normally time trials start at one minute intervals).

Cyclists who are riding towards, in or near the back of the bunch or peloton.

Accomplishments – basically all those podium places that go into the pool room.

The cycling route – just a fancier French way to say it!

The biggest or main group of riders in a big event race.

Just another word for a seat. At first it might feel a little like you’re talking about horse riding but trust us – it gets used a lot more than seat!

Also drafting (which is illegal in many races) and is the term used when referring to a cyclist riding behind another and therefore benefitting from the slipstream created.

A force created that then draws in behind it… So a lead cyclist creates a slipstream that benefits anyone cycling behind them.

The person who makes it all happen behind the scenes – the team helper, the bus packer, the bike cleaner etc.

One day of a multi-day race. The Tour de France has 19 ride stages and two rest days.

Similar concept to ITT (see above), but instead it consists of teams riding together (although each team starts at timed intervals in an effort to keep one separated from the next).

The volume of oxygen consumed whilst exercising.