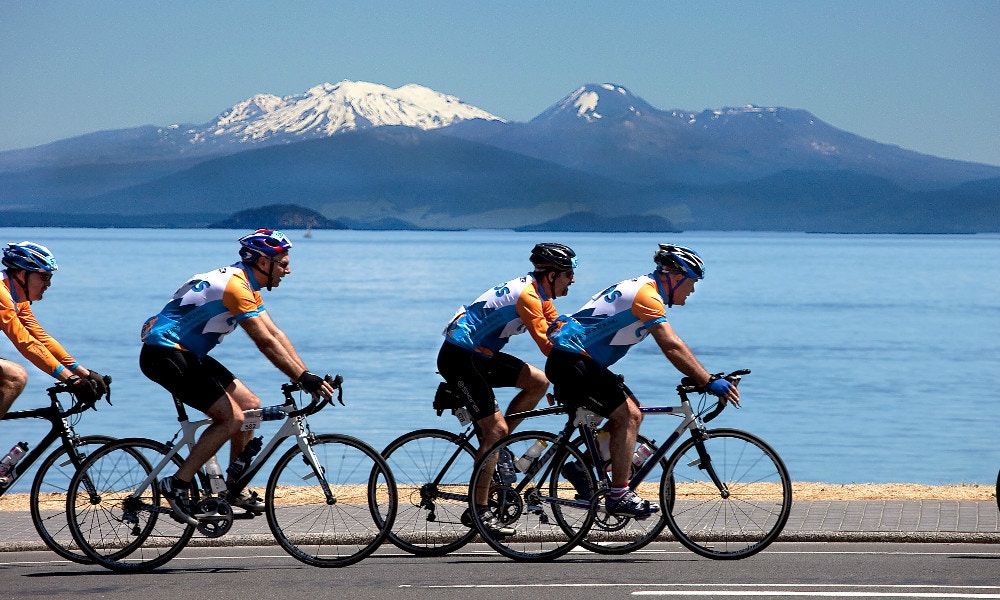 Lake Taupo is said to be the beating heart of Aotearoa.

On the race day, hearts will beat heavy together as 8,000 cyclists ride through the mountains that stand still and silent overlooking New Zealand’s Central Plateau. The Contact Lake Taupo Cycle Challenge first took off in 1977. The event is comprised of 18 different categories; the most famous, the Bike Barn Solo sees riders of all ages ride once around the lake — 160km of rolling hills and stunning scenery. For the mountain bikers out there, the 85km Huka Challenge is sure to test your mettle.

The event draws riders of all abilities from around the world to the shores of Lake Taupo. In 2014, riders from 23 countries participated, exploring one of New Zealand’s most awe inspiring destinations on two wheels.

Over its 38 year history, the Lake Taupo Cycle Challenge has raised over $1.9 million for charitable organisations. This year they are a key fundraiser for Heart Kids NZ. Today the event is owned and operated by the Rotary Club of Taupo Moana, with over 800 volunteers getting involved from 29 different local groups to support an event that has become a keystone in the Taupo economy and Tourism Industry. The Lake Taupo Cycle Challenge has grown over the years to the point where it’s no longer just about the ride. Taupo is famed for a myriad of activities: from world class trout fishing, to waterskiing and kayaking on the lake. There are bush walks of every variety from the lush green trails winding through native NZ bush to alien landscape of the Tongariro Crossing encrusted with volcanic rock formed in the fires of the Earth long ago.

Before modern science could explain the movements of tectonic plates, the slow processes constantly at work that forge the mountains and valleys that make up countries like New Zealand, people told stories to explain how the mountains came to be.

The Maori believed that the mountains were once gods. It was said that seven gods stood side by side around Lake Taupo: six of these gods were male, but one, Pihanga was considered the most beautiful goddess in Aotearoa.

All of the gods were in love with Pihanga, and were jealous of each other’s love for her. Late one night, a great battle broke out to decide who would earn the right to stand beside her. The gods spat fire and molten rock against the sky, smoke blotting out the light of the moon. The earth shook, quaking with the anger and violence of their blows for days and nights.

When the sun could again be seen through the clouds of ash, Tongariro was the last god standing. The supreme ruler of the land, Tongariro banished the other gods, giving them one night to get as far away as possible whereupon the new dawn they would be fixed in place as the rising sun touched their slopes.

Ngauruhoe and Ruapehu moved off to the south, just far enough away that they could still see Tongariro and Pihanga.

Tauhara and Putauaki fled to the east: Putauaki travelled to Rotorua, but Tauhara could not bear to be far from Pihanga, and chose to stay on the shores of Lake Taupo where he could look across the still waters and see her.

Taranaki had fought well, and was furious at his defeat. He tore a great valley in the Earth as he moved to the west. It is said the tears that he cried for Pihanga filled the valley in his wake forming the Taranaki River. Today he stands by the coast overlooking the Tasman Sea, alone.

The Contact Lake Taupo Cycle Challenge is one of the biggest cycling events on the NZ Calendar, and more importantly, it’s an event for anyone regardless of age or ability — your chance to ride a landscape rich in history, beauty and legend.