Cycling the Karakoram Highway in Pakistan and China 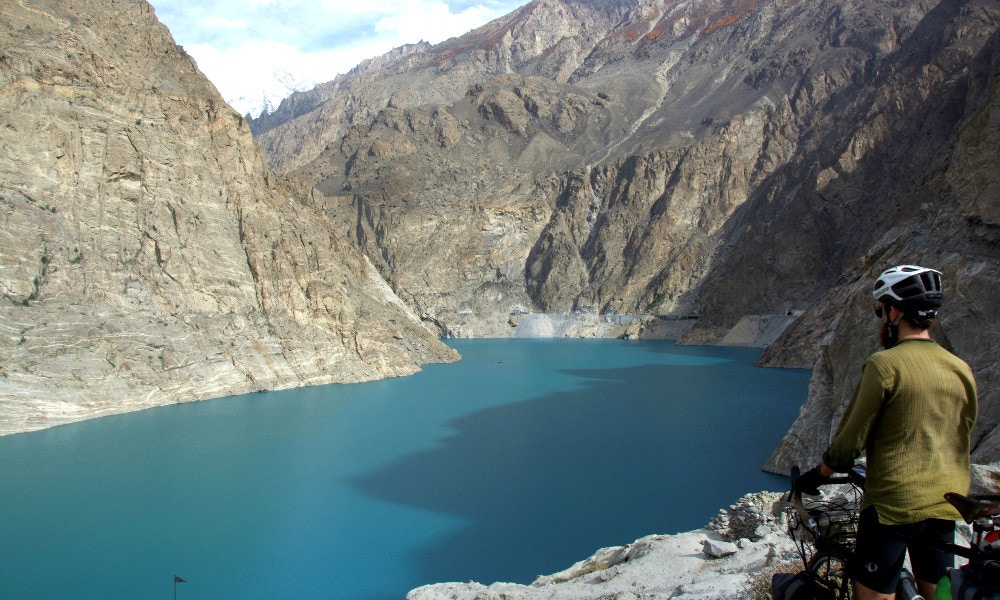 Catch up on Tim and Henrietta's journey so far in parts one and two.

Since we last wrote, we have completed one of the most coveted parts of our trip thus far, the famed Karakoram Highway that connects Pakistan with China. The road is particularly spectacular as it dissects the Karakoram Range, following the Indus River that rages with glacier melt from the numerous 6000m plus peaks that surround it. Needless to say; it was some of the most picturesque cycling that exists on this planet (we think). Typical Karakoram Scenary, the Passu Cones behind us.

See also: Meet the couple challenging the record for the longest distance travelled on e-bikes

The Western media does such a good job of focusing on all of the negatives of Pakistan, as does much travel advice and material available online. Accordingly, it was with some trepidation that we entered Pakistan from India at the Wagah border. What followed was a three-week sojourn with nothing but the most overwhelming generosity and hospitality by Pakistanis so keen to recast their tarnished reputation. And recast it they did. We left feeling thoroughly delighted by our interactions, satiated by the awe-inspiring scenery of the Northern Areas and wishing our visas allowed us to stay longer. In summary, we couldn’t recommend it more as a cycling destination.

Whilst the riding from Lahore to Islamabad was interesting, the road was fairly busy and populated; these cities being two of the three major cities in this 180 million strong country. We had some very memorable homestay hosting experiences and didn't need to sleep in a hotel or camp for the whole 300 km. We were ushered into the homes of people we met on the road, insisting that we meet their families, enjoy their food and drink their tea. The same adage of “Guest Is God” we found in India continued here, despite the different dominant religion. For Hindus and Muslims alike, hosting guests is seen as a way of worshipping god.

From Islamabad, the capital of Pakistan, the Karakoram Highway stretches for 730km to the lofty 4700m Khunjerab Pass, making it the highest paved international border crossing in the world. From the pass it covers another 400km to Kashgar, China. On this side of the border the KKH changes its name, becoming the China-Pakistan Friendship Road. It was the highlight of this leg of the journey for us and so it will be the main focus of this entry.

Just out of Islamabad the KKH is very busy as it serves as the main thoroughfare to several other cities such as Chilas and Gilgit. This section of road isn’t very scenic, nor is it pleasant to ride with all the traffic. Indeed, most people who cycle the KKH route take a bus from Islamabad to Gilgit, but we took a three-day side trip through the foothills near Islamabad and decided to rejoin the highway at Abbotobad/Mansehra. This side road, passing through beautiful pine forests and the summer vacation towns of Murree and Nathiagali, was great! Be warned though, it entails some serious climbing (2000m of elevation in two days!). The mercury dropped significantly and we were relieved to be finally using the warm sleeping bags and down jackets that we had carried in our panniers for the past two months in monsoonal India. We joined the KKH at Abbotobad and rode for a short distance before reaching Mansehra. From Mansehra to Chilas, it unfortunately isn’t possible to cycle on the Highway as it passes through the somewhat troubled Indus Kohistan region. There are numerous police check points in this region and you will not be able to pass through them, unless somehow in the cover of darkness you can evade three armed policemen and a boom-gate surrounded by rocky, steep terrain....

From Mansehra, we took a bus to Gilgit. The buses leave usually at midnight or 1am and drive in convoy through Indus-Kohistan. This section of the road is less maintained and bumpy, so the bus ride was one to endure rather than enjoy despite the spectacular views of the Himalayas. Endure we did, and 17 hours later we were awe-struck at our surrounds in Gilgit, where we prepared for the next week of riding. The Hunza Valley, the Indus River and the KKH along side each other.

See also: Tackling the heights together - riding the highest road in the world on a tandem bike

Gilgit sits at around 3000m, which meant a lot of the climbing to the border was behind us. The riding on the 200 odd km to Sost, the Pakistan border town, was surprisingly easy. The first day we rode 70km, which was almost our capacity with the thinner air. Unlike our time in India, wild camping in this part of Pakistan is commonplace and accepted, a good thing for us indeed. We pitched our tent at a chai stall in a valley beneath the giant peak, Rakaposhi towering above us at 7788m. We cooked with water from one of the glacier fed streams and fell asleep to the soothing sounds of the ice-blue water rushing past our tent.

From Gulmit the Hunza Valley opens up and you pedal amongst numerous apple, apricot, walnut and mulberry orchards. For us this was great; we munched on delicious dried apricots and mulberries as we cycled through the beautiful orchards admiring the first tinges of autumn in the leaves of the trees. All along the road, we were greeted with cheers of “Hello, how are you?” and similar, by the extremely friendly villagers of the Hunza Valley. Along parts of the KKH the Old Silk Road is visible across the valley, but by now it’s fit for a donkey and not much else!

See also: Nz is on track with Dayle Cheatley

Glaciers, peaks – the scale and size of which defied our comprehension – and a beautiful boat ride across a recently formed lake characterized the final section of the KKH to Sost. The lake was formed in 2009 when a huge landslide blocked the Indus River, flooding several villages and causing irreparable damage to the highway. Chinese workers have since built a series of tunnels connecting the two severed ends of the road but the boat remains operational for tourists to enjoy the turquoise blue expanse amongst jutting rock and snow. For those who are cycling this route themselves, it is possible to cycle through the tunnels if you have lights, but we don’t think it would be anywhere near as scenic as the boat ride.

Our exit point from Pakistan was a fairly non-descript border town, Sost where you have to negotiate a minibus to take you (and your bikes, strapped to the roof) over Khunjerab Pass to the Chinese border town of Tashkurgan. It’s a shame that this is another section that you can’t cycle; the road passes through the Khunjerab National Park and is really spectacular. However, Chinese authorities currently forbid people from cycling across the border. At the border be prepared for a fairly rigorous bag search, again by the Chinese border guards.

After Tashkurgan, the road continues to provide you with stunning vistas and sparsely populated villages. The profile of the mountains changes with the cross into China; in Pakistan the mountains are steep and pointy, in China they are flatter and rounder, but you are still surrounded by high snowy peaks all around. The highlight of this section of the ‘China-Pakistan friendship highway’ was Karakul Lake. After a long stretch of road over a 4000m plateau the piercing blue lake appears around a bend framed by towering mountains and glaciers. Yurts and yaks are dotted along the lake’s foreshore and the largely nomadic lifestyle of the ethnically Kyrgyz people persists despite the domineering Han Chinese influence. We packed up our tent in the morning to the beautiful sight of a horseman herding his dzu (a cross between a yak and cow) off a small island on the lake. See also: Go Cycle Christchurch is an initiative with legs

The ride into Kashgar from Karakul is a rolling downhill via a steep decline along the Ghez River and its gorge-like valley. There is a 50km stretch of road here that is currently under construction and all the traffic is directed along a messy, rough dirt track that roughly follows the old road. It took a lot of concentration to make sure we avoided the worst of the bumps and holes in the road while keeping our heavy bikes upright! Make sure you keep looking around for the scenery here, as there are some amazing coloured mountains all around.

After 9 days of riding on the infamous KKH, we arrived at its northern terminus, Kashgar. This city exemplifies an eclectic mix of cultures; Pakistani, Chinese, and Central Asian elements are all present, which made it a great introduction to the customs and culture we will experience in our next leg through Central Asia. One of Kashgar’s lesser-known attractions is its night market, where vendors sell all kinds of delicious (and sometimes adventurous) food. We highly recommend the delicious noodles, dumplings, fruit and nougat, but were unwilling to try some of the other specialties on offer, like whole boiled sheep heads.

Another great thing about Kashgar is that it acts as a sort of bottleneck for cyclists coming from or heading to Central Asia, the region that we will ride next. We met and swapped stories with no less than four other cyclists at our hostel, gaining some great tips for our next major undertaking, the Pamir Highway in Tajikistan. We’ll write again once we have ridden this infamous road but for now its back in the saddle for us!