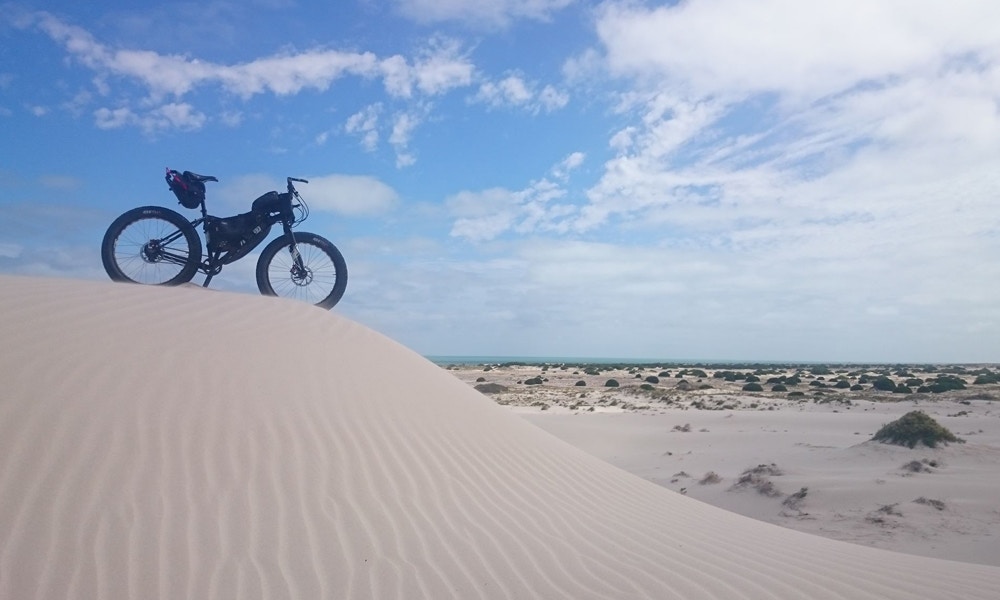 Aussie Matt Tough had too much annual leave owing, and his work wanted him to take it.

So rather than booking a flight around the world, he came up with the idea to ride from one side of Australia to the other - all the while raising funds for their Royal Flying Doctors Service, which provides medical assistance to Aussies living in super remote parts of the country.

That's 5,800km, from Perth in Western Australia right over to Narooma in New South Wales.

All up Matt spent 4 months and 22 days covering around 70km a day when he did ride (with all that leave he wasn't adverse to taking the odd day off, but Mother Nature and bike repairs would sometimes force time out of the saddle).

He decided to turn the ride into a chance to raise funds for charity, and the Royal Flying Doctor Service seemed like a great fit given he was:
a. going to ride through some fairly remote parts of the country, and
b. had experienced post bike accident medical attention in Canberra and couldn’t imagine what it would be like to have an accident in the middle of nowhere, thousands of kms from health services. As it turned out, people would come to him during his journey, sharing their stories about the RFDS and how they or someone close to them had been saved. Matt remembers especially well the story told by an outback sheerer whose wife ran into complications leading up to the birth of their child. The RFDS was sent in to collect her, and she and the unborn baby were rushed to Adelaide. It was later Doctors in South Australia told the husband that, had she arrived even 30 minutes later, both mother and child would not have survived. It had sent a chill down Matt - no other service but a plane would have been able to get her there in that time… To his knowledge, Matt is the first person to come up with the idea of riding a Fat Bike from one side of the country to the other. He was a keen mountain biker back at home in Canberra, but he knew fat bikes were made to get through snow and sand so he figured if they could do that, they could carry him across Australia. You can’t ride 5,800km and not expect the odd mechanical, and Matt certainly got his fair share. Perhaps the worst was the time the bottom bracket just completely shattered as he was riding across the Nullarbor. Thankfully a roadhouse put him up and he was able to organise a delivery from Adelaide, but it set him back several days. The worst day for flats was when he clocked 12, although they occurred in groups; by the time he’d make each repair and wait for it to dry an hour was almost up, so that was an especially long day in (and out) of the saddle.

The fat tyres had plenty of opportunity to grind over sand, but they didn’t see snow (he was travelling across the Snowy Mountains during summer). That said Mother Nature enforced a kind of mechanical when a week-long heat wave hit Port Augusta - Matt was off the bike for about a week as temperatures soared past 46 degrees, but usually averaged around 44.

Eating along the adventure What do you eat when you’re riding pretty solidly for just under five months, much of it in very remote locations?

Matt had plenty of dehydrated meals - add hot water, wait and hey presto, there’s your meat and three veg. He’d stocked an enormous supply of these back in Canberra and before shortages got too low out on the road, he’d contact a friend and give her a forwarding address for the next relief package to be mailed. These would all go to whatever local Post Office Matt had planned to travel through, and there it would be held for him to come and collect.

Normally he’d carry 10L of water a day but this would double when travelling through places like the Nullarbor. Roadhouse were always terrific; generously providing water along the way from their tanks or bores. Whenever he got close to a town he’d make a bee-line to a cafe or bakery so he could tuck into a non-dehydrated pie here, a burger there. Occasionally he’d have a pub meal for dinner to spice things up a bit.

So how do you carry 10L of water, multiple dehydrated meals and everything else on a Fat Bike? Before he took off Matt got himself a trailer. Between it and bags attached to the bike he packed:

All up and depending on the quantity of water, the combined weight and trailer bike was anywhere from 40kg - 60kg. No wonder Matt thinks he’s lost at least 10kg…

Before he left Matt purchased a sim card, which he would use whenever he found himself bunking down in a roadhouse. For those remote stretches the Spot Tracker would come in handy. A tracking device that uploads live GPS position every ten minutes, the Spot Tracker doubles as an emergency beacon (Matt would have just had to press the SOS button and an emergency message would be sent to the Spot Tracker as well as all persons nominated by Matt prior to departure).

On a few occasions Matt would forget to enter into the device his decision to stay put somewhere. When that happened, it wouldn’t be long before he received emails or messages from concerned family/friends wanting to know why he wasn’t moving. Matt got to see, smell, and hear Australia as he travelled; he didn’t just journey through landscapes in a car, but was right there soaking it all up, and that was definitely one of the highlights of his adventure. Matt was not anticipating such a level of warmth, welcome and hospitality from locals along the way. I asked Matt if he thinks that’s because he was doing something exceptional, or the people along the way are exceptional, or a bit of both. He reckons he saw many a cyclist on the Nullarbor, for example, so the novelty factor for locals probably wasn’t that high - they were just genuinely very, very good people.

The other stand-out was the day his new bottom bracket arrived and he could get back out on the bike again. He remembers riding to the beach and going over a sand dune and finding himself smack bang in front of a mob of emus. He stood still and looked at them. They stood still and looked at him. They all stood like that for some time. And then, eventually, the mob decided they’d been staring for long enough, and off they slowly went. An amazing experience Matt thinks will always stay with him. Seeing the depth and diversity of wildlife along the way was truly incredible. And donations are still welcome!

Matt’s raised $4,500 for the Royal Flying Doctors Service, but donations are still open and welcome. You can donate by visiting this link

Get more great stories from Everything Bike here