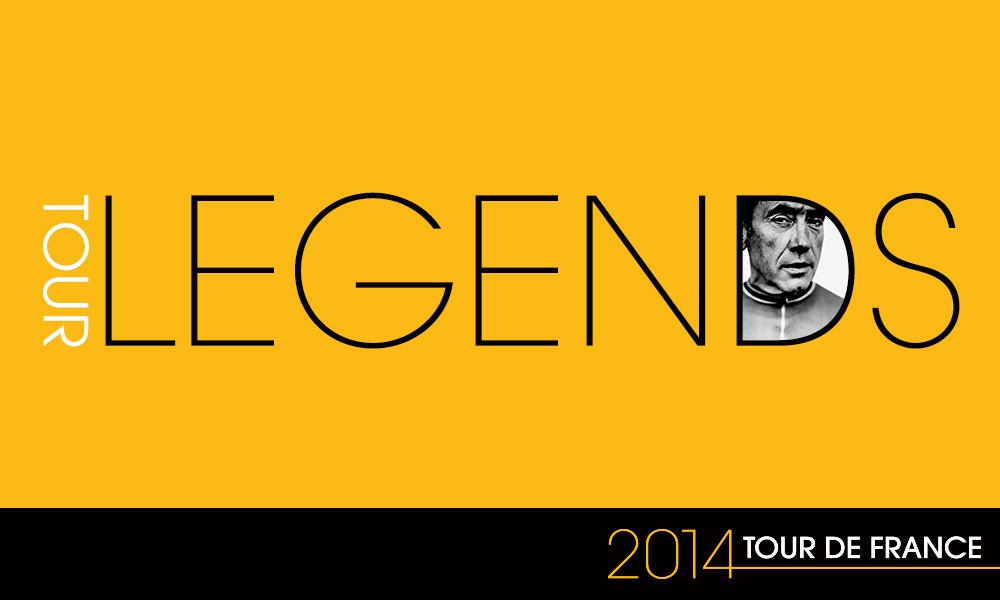 It's the coffee stop subject that comes around each and every year - who are the greatest Tour de France cyclists to ever race? It's a bit like pulling together the ultimate rugby team for all time. Let the arguments begin!

Would anyone be brave enough to suggest otherwise? Let’s take a quick look – five Tour de France wins during 13 years of racing (including winning all jersey classifications in one year) which also included 476 pro races, five wins at the Giro d’Italia, five Liège-Bastogne-Liège wins, three Paris-Roubaix victories, and three World Championships (both as a pro and as an amateur). The jury’s out as to which Tour is the most memorable, but we’re going with his first in 1969. Not only did he take home the final GC (his closest competitor was eight minutes behind), but he won six stages including a green jersey and a polka dot jersey. That’s a full suite – the white jersey (for young riders) was not around at that time.
In his heyday, ‘The Cannibal’ from Belgium was six feet, 195 pounds of pure cycling power. An all-rounder known for devouring his foes, Merckx is considered by many to not just be the greatest legend of the Tour, but the greatest pro cyclist who ever competed. We’re finding it hard to argue.

There has to be a Frenchman in this mix, and that honour surely must of course go to Hinault. Born in Brittany in 1954, Hinault clocked 250+ victories (52 of which were time trials) across 12 years of racing, including five Tour de France wins (and 28 stage wins in total). Add to the mix three Giro d’Italia wins and two Vuelta a Espana victories, and there is no question this man deserves a rightful place in our Hall of Legends. In ‘85 he won the Tour de France with assistance from Greg Lemond (who did so in return for his commitment to race with and support Lemond the following year). Hinault raced as promised, but he spent much of the time attacking Lemond, supposedly to make him realise he could win in adversity. Ouch! Funnily, Hinault was nicknamed the Badger. Now there are at least three different stories behind this name – 1/ he would often ride wearing a hairband, which made him look a bit like shaving brush. 2/ in reference to his riding style when cornered and 3/ according to Hinault, it was how local cyclists in the day would acknowledge each other when out riding (how’s it going, badger?). All three sound fairly convincing.

Le Monster from California cannot be ignored from this inimitable line-up. Indeed – he was the first non-European to win a Tour de France, and remains the only American to win (in light of Armstrong’s titles having been withdrawn). In total, he took home the yellow jersey three times. The stand-out win in our mind is 1989. He’d broken his wrist early into race season two years prior, and had returned to America to recuperate. Whilst out hunting with a relative, he was accidentally shot and almost died. That he returned to the Tour – yet alone won it – in 1989 is astounding. He won it by an eight second margin only – the shortest gap in the history of the Tour – but that was enough to have him in yellow.

The ‘Miguelón’, or ‘Big Mig’ from Spain, takes us back to the brilliance of the European cyclists. Indurain won five consecutive Tours de France – a feat no other cyclist has accomplished other than Lance Armstrong, who has since had his wins revoked. But that’s not all – he also holds the record for the most number of consecutive Tour de France stage wins. He is one of only seven cyclists to win a Tour and a Giro d’Italia (of which he won two) in the same year. Known as Spain’s greatest sportsman and renowned for his time trial ability, Indurain also boasts a bit of a freak-of-nature feature – he has a positively extraordinary lung capacity. His resting heart rate is 28 beats per minute – a figure that would qualify most mere mortals as dead. 1991 was the year Indurain won his first Tour de France. At the time, it was thought Greg Lemond had it in the bag and that certainly appeared to be the case – right up until his lead at the twelfth stage. But come the following day, Lemond cracked on the Tourmalet and was passed by Indurain. Up until then, nobody thought the giant Spaniard was a threat in the hills – his strength was in time trialling. But Indurain proved them wrong. He gained seven minutes on Lemond and created a lead that he maintained for the rest of the Tour. Oui, oui – it seems only right that the host nation appear twice on this list. This time the accolade goes to Anquetil, otherwise known as M. Crono for his time trial prowess. Anquetil was the first cyclist to win five Tours de France, the first French cyclist to win the Giro d’Italia (1960) and the first cyclist to win all three Grand Tours in the one year (1963). Anquetil might have also been one of the first cyclists to recognise the advantage of a bit of public power talk. Just prior to the 1961 Tour de France Anquetil said he would win the yellow jersey on stage one and hold it for the rest of the Tour. Mighty fighting words! But that’s exactly what he did. Anquetil also gets a special commendation from us for carrying a small comb around to make sure he looked schmicko for the cameras. We’re sensing this was a character before his (social media) time.

Viva l’Italia! We love the pazzaz and penache the Italians typically bring to the Tour, but with Coppi there was an element of vulnerability. The ‘Campionissimo’ (champion of champions) rightly earned his title after seven Grand Tour wins (two Tour de France; five Giro d’Italia) and the World Championships in 1953. Coppi raced during post WWII, a time when his home country needed a superstar and all the hope that came with it. That explains why he suffered malnutrition as a child, which had devastating consequences on him as an adult. Although his cycling thighs were huge, his bones were brittle from lack of nutrients and vitamins growing up. As a result he suffered more than 20 serious bone fractures during his racing career. Coppi and his fellow countryman Gino Bartali would race against each other, and in doing so the two took on almost mythical status back home. But these two also reminded us that good sportsmanship and Tour de France can – and do – go hand-in-hand. In 1949 the two were at it in the Tour de France, and it looked like it was all going Coppi’s way as he thundered up Izoard Pass Loch this can link to the route guide . But it was the 35th birthday of his team mate Bartali, and so Coppi gifted him yellow as the ultimate birthday present. Buon compleanno!

We’re not wrapping this up until we include some home-grown talent into the mix. OK, so Cadel hasn’t won at least three Tours de France (although he came second in 2007 and 2008), but he’s the first Australian to win one and along with Lemond, one of only two non-Europeans to take home yellow (both Armstrong and Landis had theirs revoked). That makes him a legend in Australia! 2011 is etched in our memory – seeing an Aussie atop of the podium in Paris was an incredible moment. BikeExchange.com.au almost went into meltdown with requests and enquiries for BMC bikes and tens of thousands of fans flocked to Melbourne’s Federation Square to honour him upon his return. We’re revved up about the next time we will see an Aussie wear yellow in Paris. It might not be that far away…