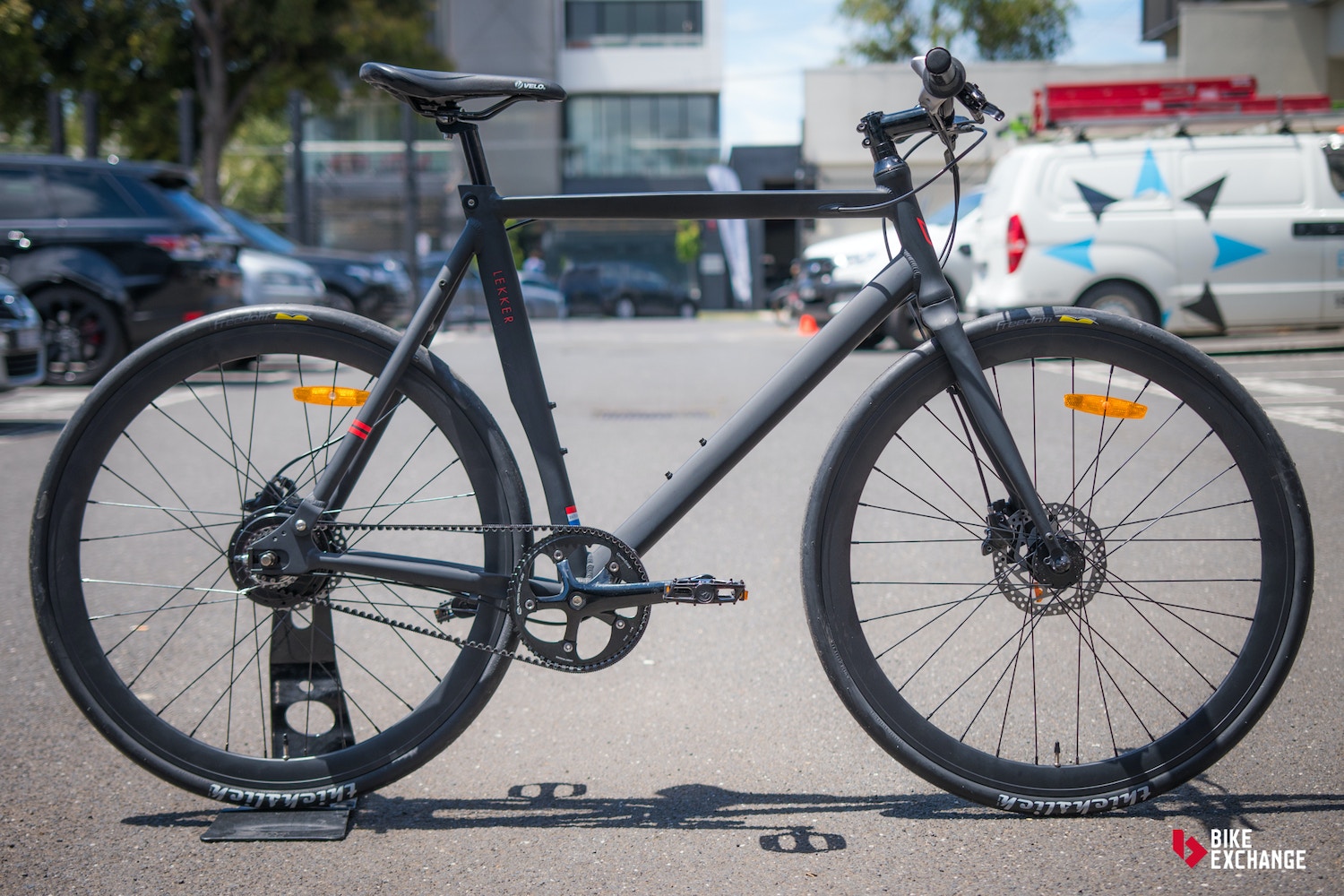 Lekker have been committed to developing stylish commuter bikes since 2009 with the aim of combining the Dutch cycling heritage with Australian culture. BikeExchange previously tested two commuter options from Lekker, the Amsterdam and Jordaan, but the company that was 'born in Amsterdam, raised in Australia' has added another notch in its belt with the new Amsterdam Elite.

The new commuter is pitched as the flagship model and features a full aluminium frame and fork; internal geared hub and belt drivetrain system; disc brakes; and generous 28mm tyres. Priced at AU$1,598, I reviewed the Amsterdamn Elite wanting to know if this new model is worthy of a price tag that's over $500 more than Lekker's previous offerings. Keeping to Dutch style, Lekker aims for minimalist designs and the Amsterdam Elite carries on that traditional. The frameset features aluminium tubes with straight lines, sleek internal cable routing, mounts for panniers racks and an integrated seatpost clamp. All of the components are claimed to be '100% rust-free' which marries perfectly with the virtually maintenance free gearing option and belt drive system (more on that soon). The test bike I had was the 'matte black' version which had an impeccable finish, but the bike is also available in 'space blue' and 'brushed silver'.

The geometry is rather typical for a commuter bike with a short reach to put the rider in a more upright position, and an elongated wheelbase to provide stability. There are just two sizes available; a small/medium which is suitable for those between 155cm to 175cm in height, and a medium/large which is suitable for riders of 170cm to 190cm. Both sizes feature a wheelbase over one metre. I tested a medium / large which came in at 13.5kg on our digital scales (including pedals). Being the flagship model, the Amsterdam Elite had to stand above all other options in Lekker's stable, and with a clever choice of components, it does exactly that. The drivetrain is 'Gates Carbon Drive Belt System' which is a smoother, quieter and a lower maintenance alternative to a conventional chain-driven drivetrain.

Belt drives are made from carbon fibre which is strong, lightweight, and won't rust or stretch, making them great options for bikes and other vehicles such as dragsters, motorbikes and snowmobiles. Gates Carbon are the market leader in bicycle belt drives and the current design is well refined.

As a choice for commuters, the belt drive system couldn't be better. It is water resistant, flexible, highly durable, quiet and requires virtually zero maintenance. It doesn't require lubricant like typical chain and sprocket drivetrains, which is a plus when commuting as there's no chance of getting grease marks on your pants if you accidentally brush up against it. It's half the weight of a standard chain and with no metal to metal contact, it's much smoother and quieter too.

The downside of a belt drive system is it requires a special frame to install as the belt can't be broken and reattached to fit through the frame. Also, belt drives are limited to single-cog use and run in a straight line. Where external derailleur shifting systems continue to dominate the market, belt drives are limited to either single-speed or internal geared-hub use, with the latter featuring on the Amsterdam Elite. The next great componentry choice is the internal NuVinci N330 gear hub which allows you to change gears without stepping through sprockets like a traditional chain and cassette drivetrain. And being internally located within the rear hub, all of the mechanics are hidden from the elements and the rider.

Instead of gears like a traditional internal geared system, the NuVinci N330 uses a unique design that provides a linear change in resistance with the turn of the grip shifter. This system provides the equivalent range a 10-12speed derailleur gear system would typically offer. It offers a better range than Shimanos' 8-speed internal geared hubs, but isn't quite as generous as the Alfine 11-speed hub. The inclusion of disc brakes will provide confidence to many commuters who travel in all weather conditions, providing better performance in the wet and more consistent, smoother braking than rim brakes. As an added benefit, hydraulic disc brakes self-adjust with wear and so require little maintenance, a perfect complement to the bike's drivetrain.

The deeper rims provide a performance element to the bike in terms of speed on the road and in the looks department too. The choice of slick tyres makes commutes a little easier, and although listed at 28mm, they measured wider, 29.61mm on the front and 30.12mm on the rear at 60psi. The first thing you notice, or don’t notice as the case may be, is the lack of noise coming from the drivetrain. It is whisper quiet and the only thing I could hear when riding was the sound of the tyres rolling along. It’s an interesting experience for someone who has only ever ridden traditional chain and sprocket drivetrains, and a great advantage when riding in traffic as it allows you to hear much clearer and be more aware of your surroundings.

The belt drive system is exceptionally smooth as well as being super quiet. Unlike almost any other shifting system, the transition between gears is smooth and gradual with the belt drive system, as opposed to the ‘step’ feeling you usually get. A simple twist is all that it takes to increase or decrease the resistance, and as the belt isn’t shifting position like a chain would, each position you twist to provides a smooth feeling. A belt drive is a great option for this high-end commuter and is the ‘set and forget’ system which most of us are searching for.

The gear ratio the NuVinci N330 hub provides is more than adequate for most commutes, the exception being if you have significantly steep hills or are lucky enough to have a solid tailwind pushing you home. I found in both scenarios the gear range was limited and I was either up out of the saddle to crest a steep climb or coasting with the breeze at my back as I had run out of gears. For 95% of my commutes around the flatter terrain of Melbourne, the range was just right.

Another stand-out feature is the display at the shifter which features a little rider on a hill to indicate the resistance position at the hub. It's a feature that's unique to this premium internal geared hub design, makes it the most intuitive and easily understood shifting on the market and brought a smile to my face every time I rode it. Being a bike for the urban environment, the Amsterdam Elite has a rather short reach which aims to put the rider in a far more upright position than normal. In addition to bein casually comfortable, this is done so that riders can see further up the road for potential hazards and adjust your riding accordingly. If you're like me and used to riding a road bike, you may find the position too upright and so lowering the stem is likely a good adjustment to make.

Part of this also relates to the limited sizing options. Even though the two sizes are said to cater for 155cm riders up to 190cm, the reality is it’s hard to make two bikes that will adequately fit people with 35cm difference in height. I’m 184cm and selected the bigger ‘medium/large’ option but if I had a choice I would have certainly gone an extra size up to stretch out a little further.

There's no hiding the 13.5kg actual weight on the road, especially given the girth sits at the back of the bike in the rear hub. This makes it feel unbalance as the front is light and responsive, while the rear takes some work to move around. This causes the Lekker to be sluggish when taking off from a set of lights, although it's a non-issue once you're rolling.

Along with the belt drive and Nuvinci hub, the Shimano disc brakes are another premium addition that undoubtedly enhances performance in the wet. As you would expect, they provide a consistent feel and great stopping power but do add further weight to the bike. I had a small issue with the way the rear brake hose runs through the frame's toptube which produced a slight rattle on rough roads. The issue is fixed with the careful placement of electrical tape on the hose to stop it from going slack inside the frame, but it's an issue that ideally you shouldn't need to fix. The 28c ‘Thick Slick’ tyres do their job well, and provide confidence when riding over cracked or uneven roads. And as we showed with our measurements, they read closer to 30mm on the rim. The benefit of the slick tyres is they roll well, lowering the rolling resistance of a tread tyre which makes for an easier commute.

The finishing kit of the bike is all functional, if not a little basic for the price. It's clear the cost of the bike firmly sits in the drivetrain, wheels and brakes, and the lesser components suffer slightly as a result. The chosen handlebar will feel narrow for those coming off a mountain bike, but are well suited to splitting traffic. The saddle is well-padded and should prove comfortable for most, while the faux leather grips are stylish, but are a little slippery when wet.

The aesthetic of the bike is mostly polished, although the integrated seat clamp suffers from having the bolt protruding past its thread, it's a shame as it's otherwise a very clean feature of the bike.

If you're serious about your commutes and live where the terrain is flatter, than the Amsterdam Elite is a worthy option. The price is significant for a purpose-built commuter, but the value is clear when you look at the Gates Carbon belt drive, Nuvinci geared hub and Shimano hydraulic disc brakes. The exceptionally low maintenance of these components raises the functionality and ease of use of this bike to a level that few other commuters could match,. It will also impress when you park it outside your local coffee shop, which isn't a requisite of a great commuter, but it never hurts. 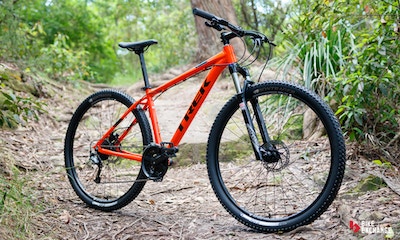