9 Reasons the Tour de France Is a Must See 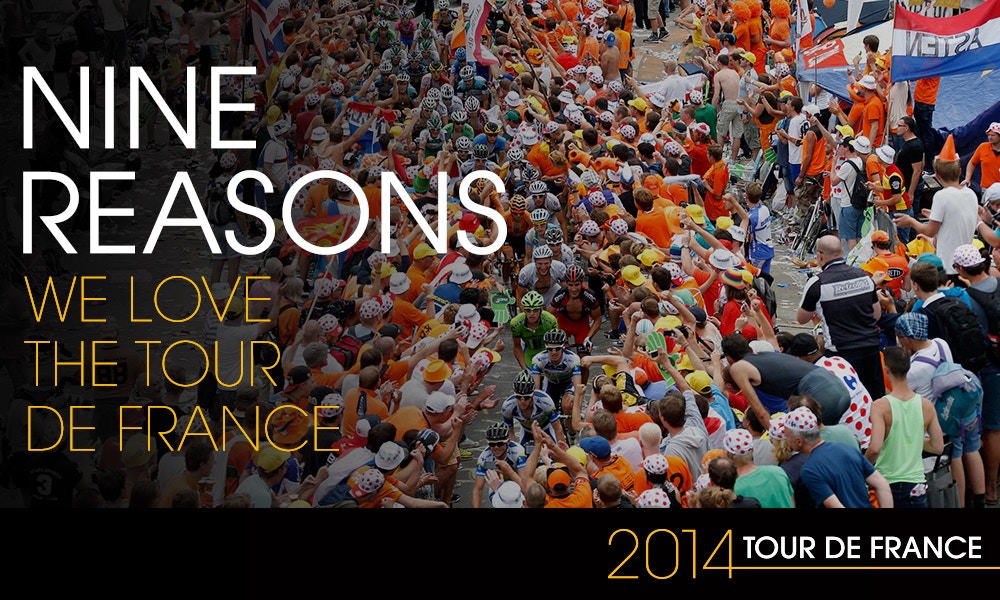 OK - the truth is we could come up with plenty more reasons as to why the Tour de France is a must-see!

Whether you live for cycling, or you just like to tune into this great race every year, the Tour de France gives us no end of reasons to love it!

1/ An unexpected feat of strength can win a stage

You could say any day of any Tour is an opportunity to showcase physical and mental strength of the very highest calibre. The examples are endless, but let’s look at ‘91 when Lemond was considered the man to take home yellow. He was looking to do just that until stage 13 when Tourmalet broke him, and Miguel Indurain took advantage. Until then, Indurain was known as a prolific time trial rider – his efforts that day on Tourmalet not only showed just how capable and diverse a rider he could be, but how one day of strength could change the expected Tour outcome. Indurain took the lead over Lemond that day, and maintained it until the end.

2/ Descending like a (super skilled) bat out of hell

What comes up must come down, yet surprisingly some of the greatest climbers don’t in fact make the greatest of downhillers. Two riders who don’t fit that bill are Peter Sagan and Cadel Evans, who can find the best lines and attack as readily going down as they do going up. Vincenzo Nibali is also an exception to the rule, as this year’s Stage 2 showed in the final descent. But it was Thor Hushovd who apparently during the 2011 Tour de France clocked more than 110km on a descent into Lourdes. 110+km…?! We’re not sure we could drive down those bends that fast!

The Tour de France is not just a daily road race.
Prior to this 21-day event, there has been SO MUCH planning. Riders have ridden sections of the course, studied it like they’re prepping for a uni exam. The Directeur Sportif will have conducted meetings at which roles will be outlined and responsibilities will be set. There is no single plan applied for every day – it depends on the profile of the route, the weather, the condition of all riders and how they are coping. Then there’s the tactics that unfold as the race gets underway – the blocking, the break-aways, the attacking, the sacrifices. Teams work their very best to conserve the energy of their leader so that when his time comes, he is best placed to make a move and with all intent, win that yellow jersey.

4/ You think Hollywood has drama?

They’ve got nothing on the Tour! From race tactics to banned substances to dramatic crashes to enduring rivalries (Froome v Contador, Lemond v Fignon, Bartali v Coppi), the Tour de France has more gripping sub-plots than any creative screen writer could imagine!

And they’ve got the character names, too.

The Sniper (Gerrans), The Shark (Nibali), the Cannibal (Merckx), El Pistolero (Contador), Spartacus (Cancellara), the Pit Bull (Talansky)… This is drama and intrigue! You’ve got to hand it to Tour de France spectators – they are one heck of a creative bunch! From that insanely energetic mountain devil, to runners in plastic inflatable Sumo suits, to super hero suits and full-body painting. Why watch the Tour in a pair of shorts and tee shirt when you can grab the headlines yourself in some seriously way-out dress-up?

But it’s not just the gear … the entire nation of France (and the ever-changing debut host nations) get caught up in the fever and take things to a new creative level. We’ve seen everything from motifs and messages mowed into fields, to bike installations in the street, to bulldozers lifting spectators up high so they can see the action and wave to cameras; even sheep in Leeds have been coloured in winning jerseys to get into the spirit of things. Gold!

6/ Selflessness is a profession

The role of the domestique is essentially to serve the leader. These riders must put their own goals aside for a single team mate, who, if the team works effectively, is the only one to wear the winning jersey. This act alone shows how selfless the sport is, but there are plenty of other stand-out moments that take it to the next level.

Stage six of last year’s Tour de France showed this when Orica-GreenEDGE’s team leader, Simon Gerrans, effectively conceded first place to allow his team mate Daryl Impey to cross the line first. In doing so, Impey became the first South African to wear the coveted yellow jersey. In 1934 Frenchman Rene Vietto was just 20 years old when he left his job as a hotel bell boy and become a pro rider on the Tour. His leader Antonin Magne crashed during stage 15 and ruined one of his wheels, so Vietto dutifully pulled over and gave Magne his wheel so the leader could continue his race.

But it didn’t stop there.

On Stage 16 Magne once again crashed, but without Vietto’s knowledge. It was a mountain stage and Vietto was a prolific climber. It wasn’t until a race marshal on motorbike reached Vietto that he became aware his leader’s yellow jersey was seriously under threat. He turned around, and began to ride back up the mountain, as competitors flew past in the other direction. He reached Magne, gave him his bike and allowed his Leader to regain the gap created, eventually becoming the 1934 Tour de France GC winner. And perhaps not selflessness per se, but certainly an act of incredibly good sportsmanship, we have to remember 2012 when Sir Bradley Wiggins slowed down the peloton to allow Cadel Evans, who punctured from an act of sabotage (nails on the road), to catch up.

7/ That’s not endurance – this is endurance!

Professionals in any arena usually make things look a lot easier than they really are. Pro cyclists are no different – they glide up mountains, they thunder down straights, they go harder, faster and more powerful than us mere mortals… which is why the Tour de France can be a little misleading, especially for those of us watching it on TV. Sure they grimace and show the pain, but it doesn’t seem proportionate to the extremity of their challenge.

3,664km across 21 days, with six mountain stages, five hills and two rest days. For the serious but amateur cyclist, getting in excess of 250km a week is a pretty good feat. For the serious cyclist Down Under, tackling ascents that are anything like those in France is just not possible.

Let’s look at just one example – the famous Alpe d’Huez, which has featured on many a Tour route. This one mountain offers up to 21 hairpins, a 10% gradient and 1,000m altitude across a 14km distance. Now that’s hell on wheels.

And this is why we love the Tour. Who said the Tour is the only event during which competitors probably should get a hair-cut half-way through? The challenge of the Tour is the very fact that it’s just not possible for so many – it takes men to their very physical and mental limits. How many of us can say we’ve truly done that when we cycle?

8/ France – just when we think you’ve reached your fair quota of stunning, you go knock things out of the ball park

France – you just don’t do things in halves, do you?

No wonder this is the world’s most popular tourist destination. The Tour de France is like a spinning publicity campaign for the country. As the colourful and graceful (albeit from afar – things can get pretty dicey up close!) peloton snakes its way through cities and villages, up spectacular mountains, along ice-coloured rivers, by flower-filled fields, who doesn’t start thinking about planning a holiday to France?

We love the Tour de France even more when there are Aussies and Kiwis involved! Now that Australia’s got Orica-GreenEDGE, there’s every reason to wave the flag (or the inflatable kangaroo), but our pro team isn’t the only cause for patriotism. Cyclists like Mark Renshaw (Omega-Pharma Quick – Step), Richie Porte (Team Sky), Michael Rogers (Tinkoff-Saxo), Rohan Denis (Garmin Sharp), Adam Hansen (Lotto Belisol), Zak Dempster (NetApp Endura), Heinrich Haussler (IAM Cycling) give us reason to Oi, Oi, Oi! And NZ is showing its strength through the riding brilliance of Greg Henderson and Jack Bauer – they might be riding for Lotto Belisol and Garmin-Sharp respectively, but they’re waving the Kiwi flag high!

Hungry for more Tour de France? Check this out