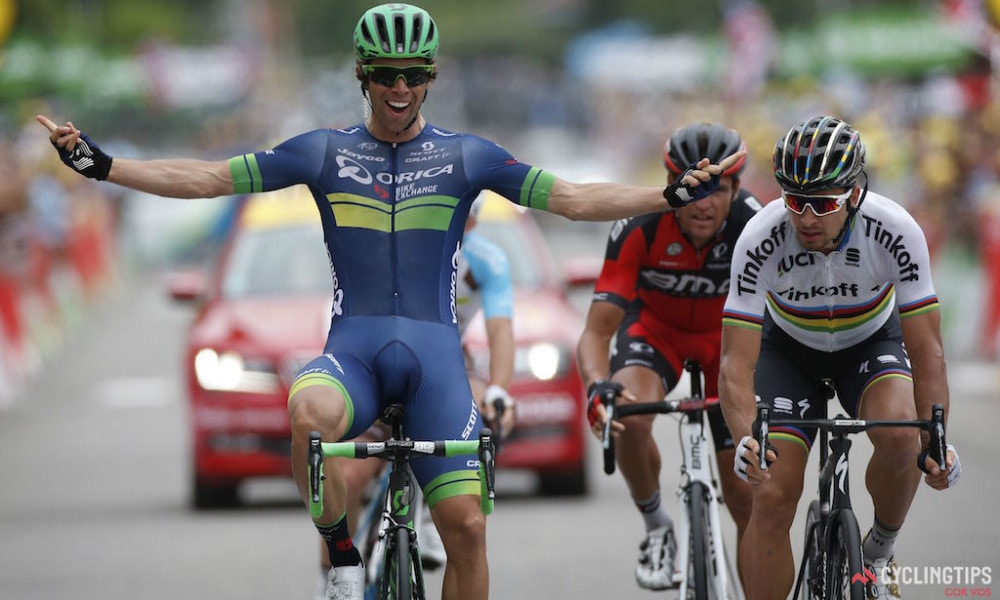 Australian Michael Matthews (Orica-BikeExchange) took his first career stage win at the Tour de France out of a breakaway on stage 10 in Revel Tuesday. The finish saw the top two finishers at the world championships in 2015, Peter Sagan (Tinkoff) and Matthews, battle it out for the stage victory. And though there was no rainbow jersey on the line, Matthews got a bit of redemption against his Slovakian rival.

Matthews was aided by numerical advantage; Orica teammates Daryl Impey and Luke Durbridge also rode in the day’s breakaway, giving the Australian team three out of 15 in the break. The three riders made the select group of seven after Sagan split the breakaway in crosswinds with 25km remaining.

“It’s unbelievable,” Matthews said. “I was close to giving in at this race after I had two bad crashes [in 2014 and 2015]. I thought maybe this race is not for me but today my dream comes true. It was never the plan to go for a breakaway today. We wanted a bunch sprint finish but we’re such a strong group of guys. Durbridge and Impey gave me everything to win today. I have no words to describe what they did for me.”

Durbridge and Impey sacrificed themselves for their teammate, with the latter attacking multiple times on the short Category 3 climb before the finish.

Matthews shadowed Sagan the entire time and came through for all his teammates hard work. His Tour win gives him stage wins in all three of the Grand Tours.

The peloton rolled across the line 9:39 behind the stage winner. Chris Froome (Team Sky) pulled on the maillot jaune for another stage, as no changes occurred in the general classification. Froome leads the leader of the Best Young Rider Classification, Adam Yates (Orica-BikeExchange), by 16 seconds, with Dan Martin (Etixx-QuickStep) in third at 19 seconds.

The 10th stage of the 2016 Tour took the riders along a 197km (122.4mi) route from Escaldes-Engordany in Andorra to the French town of Revel. A Category 1 climb right from the start made sure the riders were wide awake, but then a long descent and a mostly flat ride to Revel made for a less stressful day than the hail storm on Stage 9. The Category 3 Côte de Saint-Ferréol (1.8km at 6.6%) threw a wrench into the finale, peaking with just 7km to the finish.

The Category 1 Port d’Envalira (22.6km at 5.5%) began a mere 2 kilometres into the stage and the Souvenir Henri Desgrange awaited the first rider over the top, as the climb was the highest point of this year’s Tour at 2,408m (7900ft).

Rui Costa (Lampre-Merida) crested the climb first, and on the descent and into the valley the front of the race reshuffled on multiple occasions with aggressive racing.

Sagan took the intermediate sprint point uncontested with 74.5km to the finish, as Katusha and IAM Cycling led the peloton more than six minutes behind. The world champion moved into the virtual lead in the points classification.

As intermittent rain fell on the riders, Thomas Voeckler (Direct Energie) came to the front of the peloton to assist in the pacemaking; an interesting tactic considering Direct Energie had Chavanel, a previous stage winner at the Tour, in the breakaway.

With 25km to go, the riders entered a crosswind section and the breakaway split. Sagan, Dumoulin, Boasson Hagen, Van Avemaet, and the three riders from Orica-BikeExchange formed the leading group. When the peloton rode into the crosswind less than four minutes later, riders began being shelled off the back.

A slowing in the peloton allowed the riders who were trailed off to rejoin the group, as those at the front of the race continued to power on. The leaders were able to stretch their advantage to over five minutes.

Durbridge drove the breakaway to the bottom of the Category 3 Côte de Saint-Ferréol (1.8km at 6.6%), which peaked with 7km to go. Orica-BikeExchange had the numerical advantage with three of seven riders in the leading group and looked to put Matthews in a position to win.

Impey made multiple attacks on the climb with Sagan forced to bring back the move every time. Over the top of the climb, six riders remained in front with Durbridge dropping off, his job done for the day.

Boasson Hagen tried an attack on the descent, but Sagan quickly shut down the move.

Under the Flamme Rouge with 1k to go, Impey drove the pace followed by Sagan, Matthews, Boasson Hagen, Dumoulin, and Van Avermaet. The BMC rider opened the sprint from rear of the group, a long way out from the line.

“I wanted to surprise them and go from far, as most of the time it’s my strongest point, but a few guys came over me,” Van Avermaet said. “It was a hard day on the climb and I knew if a big break goes then it would go to the finish, and that’s why I tried to stay as long as possible. I climbed with the peloton, did a good descent and then bridged with Sylvain Chavanel to the breakaway. But I think Sagan was really strong so it was hard to beat him.”

Matthews proved to be the quickest of the group and took his first career stage win at the Tour. Sagan finished second, with Boasson Hagen in third. The world champion was notably slow to react in the sprint after chasing down attacks and leading the group for most of the final kilometres.

“It’s always possible to win, but they let me close all the gaps,” Sagan said. “Matthews had the best position before the sprint while I had lost a lot of energy before the sprint. It didn’t go very well at the end but it could have been worse as well.”

After the stage, Sagan pulled on the maillot vert as leader of the points classification and Thibaut Pinot (FDJ) kept his lead in the King of the Mountains classification.

“I have a bit of a cold. We have to make a medical check tonight,” Pinot said. “In the climb to Port d’Envalira, I tried a few times. We marked each other quite a lot. The only time I didn’t go with the move, it was the decisive one to get the points at the top but it was more important for me to mark Majka. Our next appointment is at the Mont Ventoux.”

No changes occurred in the fight for the overall title and thus Froome pulled on another maillot jaune after stage 10.

On Wednesday the Tour travels from Carcassonne to Montpellier. The 162.5km (101mi) flat stage should see the sprinters battle it out for the stage win, though anything is possible with Mont Ventoux looming on Thursday. The last two stage finishes in Montpellier, in 2011 and 2013, saw Mark Cavendish (Dimension Data) and Andre Greipel (Lotto-Soudal) take the win, respectively.

ORICA-BikeExchange rode the perfect race on stage 10 to set-up Michael Matthews for his first Tour de France stage win. Teammates Luke Durbridge and Daryl Impey sacrificed themselves to put Matthews in an ideal position for the win, and he didn't disappoint. Matthews was full of praise for his teammates after their selfless work helped the Australian rider banish some painful memories of the Tour.

“It’s unbelievable,” said Matthews. “The emotion at the moment is just sinking in. I’ve just won a stage of the Tour de France after two really bad years in this race.”

“I was really close to giving up on this race, I just thought this race is not for me and I’d focus on other races, but today my dreams came true."

“It was never the plan to get into the breakaway, we thought it was going to come down to a bunch sprint. We have such a strong group of guys here and the way we work as a team is that everyone gives everything for their teammates.

“As you could see Daryl (Impey) and Luke (Durbridge) gave their all for me today and were both amazing all the way to the end.

Durbridge himself proudly added, “When you close out like that you could call it a technical masterpiece. We are pretty happy with that.”

“It took full commitment from everyone from kilometre zero to the finish. It doesn’t always come together like that but when it does it's pretty special.”

Sport director Matt White was pleased with the win and the concentrated performance from the team.

“The boys rode incredibly well today,” said White. “It was a very elite group of riders in that breakaway including world champions and a Grand Tour winner and it was hard for us because we had three guys in there and everyone was looking to us to control it.”

“Our level of concentration was very high and Luke, Daryl and Michael all played their roles to perfection.

“Luke set a really hard tempo going onto the two short climbs before the end which was very important before Daryl forced the hands of the other riders the final few kilometres.

“Michael finished it off very well and proved that he was the fastest the guy in the sprint and we are all very happy with the stage win.”