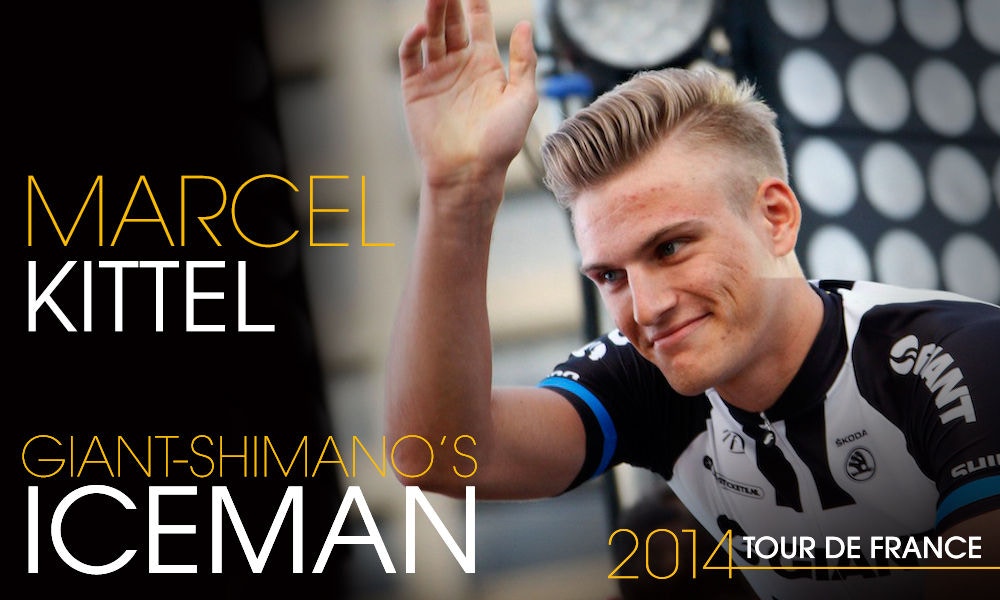 What bike does he ride? How did he get into riding? And just who is his doppelganger? We find out more about German sprinting superstar Marcel Kittel.

We saw it on stage one of this year’s Tour de France. The Giant-Shimano team leaves it late to begin their lead-out, ensuring legs are as fresh as they can be. Stage one saw the team stick to their strategy like glue – they let Cavendish’s Omega-Pharma – Quickstep set the pace for a solid two kilometres before Kittel and his team launched their attack. It was seamless, case study material and it paid off.

A word of warning

Following stage one of the Tour de France 2014, Kittel thanked crowds for their incredible support, but drew attention to some randoms who were willing to get an action shot no matter what the outcome. He’s asked that crowds take care not to cause injury to themselves or cyclists.

I feel the need… The need, for speed!

We know we’re not the only ones. Who else thinks Marcel Kittel could double as Iceman in a Top Gun sequel, if ever there were one? The precision hair (does it stay like that in the helmet?), the shades, the cool-as-a-cucumber race face; this is the man who would give Maverick a run for his money.

Where did it all start?

German sprinting sensation Marcel Kittel started his sporting life in track and field. From a family of athletes, it’s little surprise he had an inner drive to keep as active as he possibly could. It was Kittel’s dad who encouraged his son to take up riding – specifically mountain biking. But Kittel was always taken by the idea of road riding, and soon made the switch. He wasn’t exactly a natural when it came to MTB race results, but his father encouraged him to realise that as long as he’d given 100%, where he placed was not of consequence. Then he made the switch to road racing, and things started to change…

Once he was enrolled in Erfurt Sport School, Kittel hit his straps. Finally able to better balance education with sport, Kittel started to see results. He took out the 2005 + 2006 Junior Time Trial World Championships. He became the one to watch.

Thüringer Energie Team was taking notice, and took the young Kittel under their wing. It became a crucial step in him turning pro, which he did – but not before some upsets. 2010 proved a challenging year for Kittel – instead of showing what he was made of and what he could achieve, he suffered a string of injuries and illness.

But the potential must have been clear to see, and Team Skil-Shimano saw it. Despite his set-backs, they signed him onto the team and he clocked 17 wins during 2011. Needless to say, it’s been one hell of an impressive career since, with 13 UCI wins in 2012. But it was 2013 that made the world sit up and see Kittel for the Grand Tour threat he’d become. Winning the stage two sprint of Paris-Nice was impressive, yet what came next at the Tour de France was the stuff of spine tingles. A yellow jersey, a green jersey, a white jersey; four stage wins and Kittel had carved for himself one heck of a career. We can only wait to see what happens now.