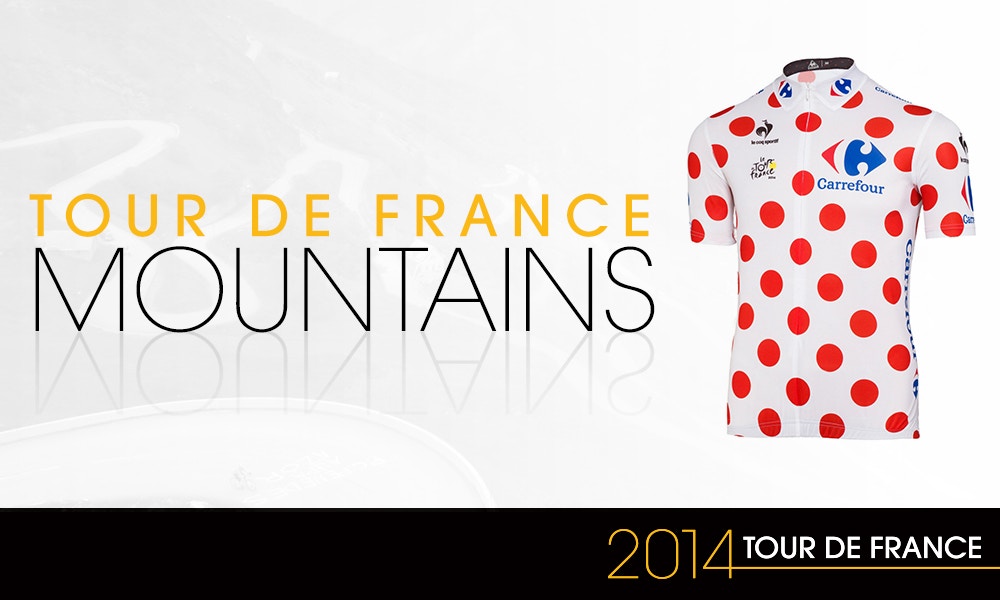 As much as we think every day of racing at the Tour de France is addictive, it's surely the mountains that bring the biggest crowds and create the most buzz?

Why do we love monster mountains?

So what is it about the mountain stages? As Greg Lemond once said, they’re where the raw talent comes out. There is no hiding in a bunch when it comes to those vicious gradients, and the race becomes a show of mental courage under extreme physical duress.

The fastest climber (or ‘grimpeur’ in French) with the most points amassed whilst climbing is rewarded with the polka dot King of the Mountain jersey. It might not be the coveted yellow General Classification jersey, but there is no doubting the prestige and celebrity that goes hand-in-hand with the polka dots.

Bring on the mountains – we just can’t get enough! What makes a mountain?

The Tour de France’s mountain stages are segmented into sections. Each section is graded as per its degree of difficulty, and points are respectively awarded. Category 1 indicates the most difficult stages of climbing, whilst category 4 represents the least difficult (let’s not forget however, that even on category fours we’re still talking mountains!). There are also climbs that are so tough they’re classified ‘uncategorised’ or, as the French say hors catégorie.

So what’s in store for the 2014 Tour de France mountain stages?

There are six mountain stages, five of which are altitude finishes. Things start to rev up this year around stage eight however, it’s really not until stage 10 that the true mountain climbing begins.

Check out more of the 2014 Tour de France route

This is where the Tour winds into the Vosges area, a mountain range in the east of the country that is considered a cycling paradise. Medium size mountains abound here. When the Tour is not in town, roads are quiet and cycling is a pleasure. Whilst the Tour is in the area, though, locals can of course expect beautiful bedlam! The Tour returns to La Planche des Belles Filles (plank of beautiful girls). About the last 6kms of climbing is at 8.5% although there are some sections with more pinch. This mountain stage is right in the Alps and although the first half isn’t a grind, by the time the bunch gets to Chartreuse Alps via Col de Palaquit they’ll have plenty of climbing on their hands. Col de Palaquit is some 14.1 km long with an average gradient of 6.1 %, and the final 18.2km up to Chamrousse has an average gradient of 7.3 % (with many sections beyond 10%). 2,360m. That’s where Col d’Izoard sits on the altitude chart, and that’s where the peloton has to go - some 19km at an average of 6%, with the final 9km more like 7.5% - 9%. Also on the itinerary for today is the Col du Lautaret - 34km at 3.9%. There’s something like ten uphill tunnels here, through which riders must pass. But aside from those dark, long spells the route is spectacular and will be a delight for us spectators. This day is an altitude finish at Risoul. Here’s where we come to the superb Pyrenées, but not before a rest day in the impressive town of Carcassone (a medieval town that makes Game of Thrones sets look a little lacking). There’s a nice flat start that riders will appreciate, but the short and steep Col de Portet d’Aspet (5.4km at 6.9%) puts an end to that, as does Col des Ares (6km at 5.2%) and the final summit of Port de Balès (11.7km at 7.7%). This stage however, is the only mountain stage without a summit finish. Instead, there’s a 20km descent that is sure to shake things up a bit. This is the longest day for the Tour at 237.5km. The riding today starts in Spain and the French/Spanish border provides the first ascent for the day – Col du Portillon, before the peloton returns to the Pyrenées proper and finishes in Pla d’Adet (pronounced Plah-dah-day – very cool). This is one tough day, with all category 1 climbs but for the last, which is hors categorie. So what's on the menu? Are Tour de France organisers saving the most scenic for last? This is the final day of the mountain stages and let’s just say they’re going out with a bang both in terms of landscape as well as a super tough day in the office (category 3 climbs and two hors categories). Mountains, mountains everywhere! These particular days we’re sure are going to make for sensational viewing, so get some early nights before hand, bank up the sleep before staying up to make the most of the action live.