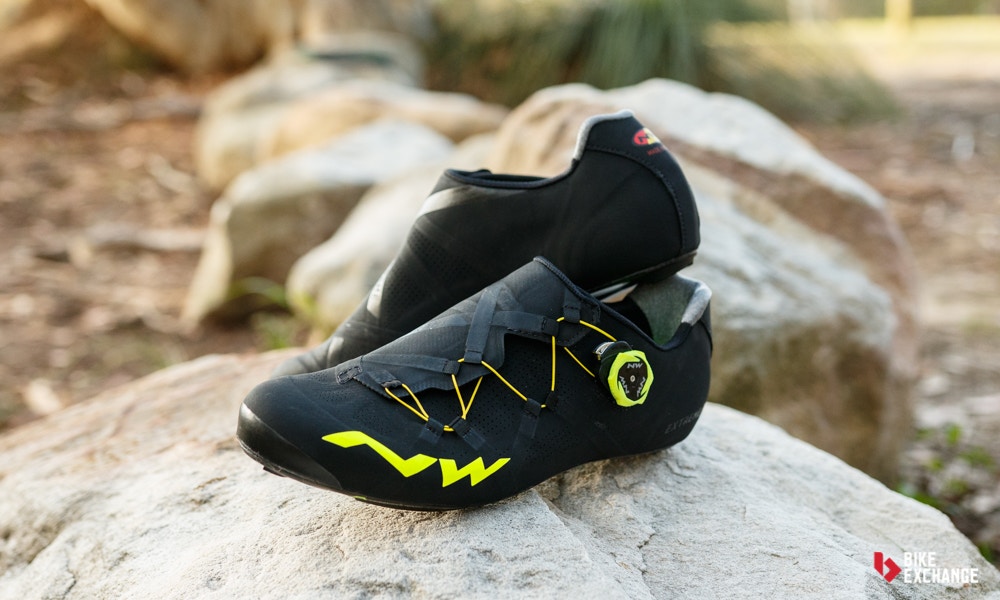 NorthWave has been a big player in the performance cycling shoe market for some time and their latest top-tier road offering looks set to shake things up. The new design features a unique single-ratchet design, is said to produce 'zero pressure', rates a 15/15 on the stiffness scale and will please the weight weenies. The Extreme RR performance road shoe also looks striking, offered in a matte black or popping fluoro yellow that is sure to capture some attention.

CyclingTips’ Australian tech writer Dave Rome and US editor James Huang will be reviewing the new NorthWave Extreme RR. We were lucky enough to get our hands on them for a brief moment to take some pictures and get an idea of what the new shoe is all about before the full review is released on CyclingTips. Aside from the new aesthetic, the biggest talking point of the new shoe is the unique single-ratchet design which equally pulls the 'wire' at two points simultaneously. This system, combined with the strategically placed textile loops, results in an evenly tightening mechanism that distributes the pressure across the whole foot, eliminating hot spots or pressure points. NorthWave refers to this as 'zero pressure system'. Unlike many other shoe manufacturers that use the BOA system, NorthWave has their own 'S.L.W. 2' (Speed Lace Winch) closing mechanism which allows either micro-adjustments in both directions or a complete release of the shoe.

The single retention wire runs through loops of material, with NorthWave apparently going through a long design process to achieve this. The material used to hold this wire runs in strips along the entire shoe, crisscrossing itself from the sole and across the entire upper. These strips also help to reinforce the minimalist upper design. The outside of the upper has a smooth, suede-like feel to it, injecting a little style in true Italian made fashion. Inside, the heel is met with a two-way material quite similar to that used by Shimano’s top end shoes of recent years. The material fibres are orientated in a single direction to hold the foot and prevent slipping, and the deep heel cup shape further secures it into place.

NorthWave’s recent Extreme shoe ranges promoted the idea of offering multiple volume choices, the Extreme RR goes back to a single option but instead provides two sets of different height footbeds to achieve much the same thing. This is given in addition to a wrap-around upper, which NorthWave state does a great job of offering a precise fit. The two footbed options are referred to as 'standard volume' and 'high volume', the latter featuring an extra 2 mm toe insert for narrow feet. It's virtually impossible to compare sole stiffness between brands as each has a different rating system and way of measuring stiffness. The Extreme RR's unidirectional carbon sole is rated a '15' on NorthWave's stiffness index, their highest rating to date.

A nice feature, and one that few other shoes on the market offer is intentional Speedplay Zero cleat compatibility. A special NorthWave adapter plate is available aftermarket to make use of this feature, but it's a great option for those using the dual-sided pedal system.

The Extreme RR shoes are available in size 36 - 48 and half sizes between 39.5 - 45.5. The pair Dave is testing are an EU43 and tipped the scales at 510 grams including footbeds. The recommended retail for the Extreme RR is AU$449.95. That's a pretty respectable price for a top-tier pair of race shoes which include two sets of innersoles and a handy carry bag. The shoes haven’t arrived in New Zealand yet, but we’re told they’re getting close.