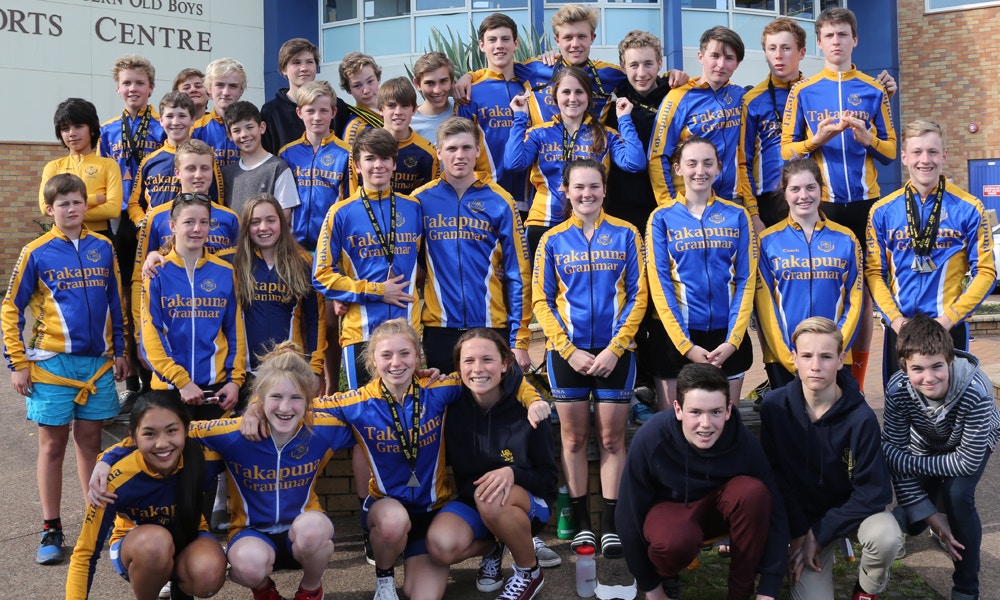 One 90 to 105-minute training session first thing in the morning.

No – it’s not a page from a pro rider’s training schedule, but the weekly work out of Takapuna Grammar’s Road Cycling Team, all 46 students from Years 9 - 13.

According to the North Shore school’s Sports Director Sharon Davies, cycling is growing in numbers each year and the students love it.

2014 saw students divided into 11 teams, each supported by a volunteer coach. Wherever possible the school tries to reinvest back into its coaches by way of upskilling courses; a move Sharon believes has played a big part in the team’s burgeoning size and strength. But not all coaches are parents. Since the team was formed about a decade ago, a local in the area with a passion for cycling has consistently volunteered their services; it’s testimony to how passionate cyclists in the area can be, and how encouraged students are to get on and give riding a go.

The school kicks off each year with a March pre-season cycling camp at Waihi Beach. The group undergoes two-and-a-half days of intensive, rigorous training sessions – a solid kick-start to the winter riding ahead. Once the cold settles in over May, the competitions begin. Along with the iconic Auckland Team Time Trials, the North Island Secondary School, New Zealand Secondary School Individual Championships, and New Zealand Schools Cycling Championships are race calendar highlights at the school.

During their endurance training sessions on a weekend, students can be seen all over the shore and beyond. Bunches are up to 20 riders strong, around 12 of which are students and the rest parents (some of whom might have to work hard to hold on!). For the senior riders, a 100km Sunday session is nothing out of the ordinary and if anything they will often take place after racing.

Sharon doesn’t think there’s any single motivator responsible for students putting in such a commitment. Maybe some want to just be able to smash their mates in a bunch ride. Maybe they want to keep fit. Maybe they love the social aspect to it all. Maybe they want to be the next Jack Bauer.

Possibly it’s all of the above.

Whatever it is they get out of it, it’s positive for the students and positive for their education – despite the hours they put in weekly both in terms of their official training schedule and the riding some of them do over and above, the Cycling Team students are all really engaged academically.

It’s certainly not hurting their riding performance either – this year the school has three students in the NZ U17 road cycling team (and have had two others in previous years) and former student Scott Thomas is now riding for L&M Group Ricoh NZ whilst at university.

The school’s Head Boy also rides, and in 2014 won the boy’s cycling category for the Auckland Secondary Schools College Awards.

And their medal tally for this year alone? Their 46-member strong team managed to bring back a whopping 145 medals, making for an impressive 2014. Who knows what’s in the bag for 2015…

Do you want to know/add in how many medals we won this season? Final count was 145 across all the various races across the team of 46.

Takapuna Grammar School’s Cycling Team definitely looks like one to watch in 2015.