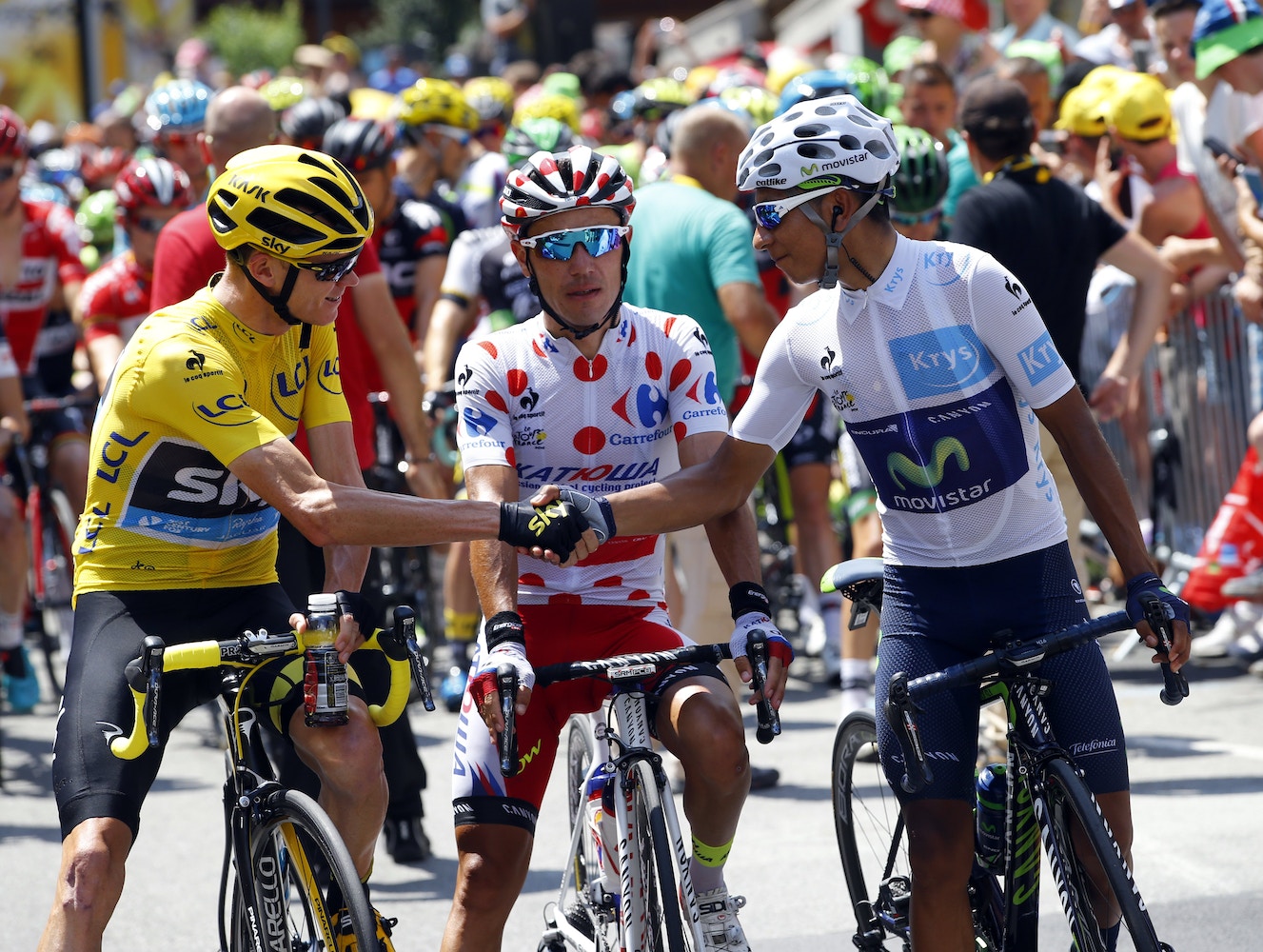 This year's tour will rank as one of the most exciting ever.

The 21 stages offered the most aggressive racing we have seen in years, with rarely a lull in the action.

We take a look back on three weeks of racing and pick out the top 5 talking points from the 2015 Tour de France.

As long as I breathe, I attack.

The famous quote from Bernard Hinault has never been more appropriate than the 2015 Tour de France. Attacks have come on the flat, in the crosswinds, in the wet, up short climbs, up long climbs, on descents, on transition stages, across the cobbles... As long as I breathe, I attack. There has hardly been a stage in this year's tour that didn't have some element of aggressive racing.

On Stage 2 Bardet, Valverde, Quintana, Nibali and Pinot's chances of an overall victory were dealt a huge blow before the tour had really started, when Etixx - Quick Step tore the peloton to shreds in the rain and crosswinds. Those GC contenders lost 1:28 on Froome, Contador and van Garderen. The final margin between Froome and Quintana coming into Paris was 1:12... You can only imagine what Quintana and Movistar must have been thinking to themselves; how different the tour could have been had it not been for a 30 second lapse in concentration on the second day.

Many thought Froome's Achilles heel was his inability to descend.

Knowing that Team Sky had the numerical advantage up the mountains, Nibali looked to every descent to exploit this perceived weakness. On Stage 16, 17 and 18 Nibali played the same hand, attacking nearing the top of the climb and challenging Froome to hold his wheel on the descent. The approach paid off on Stage 16, gaining a 30 second advantage over the other GC contenders, even if it meant risking life and limb to do so.

And who could forget stage 12, the final climb of the Plateau de Beille saw Froome attacked relentlessly by Contador, Valverde, Nibali and Quintana. Froome stood up to their onslaught, but only through the assistance of his lieutenant Geraint Thomas.

Despite the aggressive racing and persistent attacks, this year more than ever, a complete rider has won the tour... Froome can climb, he can time trial, he can descend, and he had the strongest team around him to negate all other challengers.

When second is good enough for first.

No one has animated the 2015 tour more than Peter Sagan. He featured heavily on so many stages, finishing second of five occasions, being in the breakaway four successive days and winning the most aggressive rider award twice. Sagan was able to secure the green jersey before the final stage on the Champs-Élysées, and he did it all on his own. Tinkoff - Saxo put all of their eggs in the Contador basket and left Sagan to fend for himself. You can only wonder what he would be capable of if he had a team committed to getting him stage victories. And all this from a man who is only 26 years of age.

To breakdown Sagan's impression on the 2015 tour, here are his top three moments. I eat pain for breakfast.

Every year we see crashes and multiple abandonments, but this year seemed to be the worst in recent memory.

Even more heartbreaking is Tony Martin and Fabian Cancellara were both forced out of the event while wearing the yellow jersey. Equally tragic was Tejay van Garderen, who was third overall when illness got the better of him.

Add all of those names to a handful of riders who probably should have abandoned; Adam Hansen suffered a dislocated AC joint on stage 2 but carried on, Michael Matthews suffered two cracked ribs on stage 3 but persevered and Jean-Christophe Peraud was almost skinned alive on stage 13 but somehow found a way to finish the stage.

The Tour de France is not for the faint-hearted and once again proved it is the toughest sporting event on the planet. The Tour means more than we think.

This year we saw some engrossing battles for competitions other than yellow, and some fierce battles over bragging rights. With the yellow jersey wrapped up (in all but name) early in the tour teams and riders battled it out for every remaining prize.

On stage 18 we saw Giant - Alpecin versus AG2R La Mondiale for the pride of France. Warren Barguil of Giant - Alpecin went into the stage with a 2:56 advantage over Romain Bardet of AG2R La Mondiale. Bardet made it into the breakaway and halfway through the stage he became the virtual best placed French rider in the tour. This caused a huge response from Giant - Alpecin who split the peloton in their chase of the breakaway. With 10km remaining on the stage, Barguil was three minutes down on Bardet who was not only burying himself for the stage victory, but also bragging rights as the best French rider. As it turns out Barguil finished 3:02 behind Bardet and lost his standing.

The teams classification was another contest that had plenty of intrigue.

BMC Racing Team owned the title until stage 9, Team Sky held the title briefly but from then on Movistar sat above the rest. Their big challenger however, came from a surprising source. On stage 15 MTN-Qhubeka p/b Samsung were sitting in eighth position, 52:32 down on first placed Movistar. Thanks to three strategically placed riders in the day's breakaway, by the end of stage 16, they had moved into second and were now only 20:30 down on Movistar. They would eventually fall short of the teams classification but make a huge statement in their first Tour de France. Speaking of MTN-Qhubeka p/b Samsung, Stephen Cummings victory on Stage 14 not only had meaning for him, but for a whole country. July 18 was the birthday of the late Nelson Mandela and the team was riding the stage in honour of the great man. The course profile didn't suit Cummings but sometimes the will of a man can overcome any obstacle. That day the tour meant more than a stage victory to a rider, it was a tribute to a country's hero.

Stage 17 gave us an insight into what the Tour de France means to people. The bearded Simon Geschke is a domestique for the Giant - Alpecin team and spends 99% of his time working for others. On stage 17 he was given the green light to go it alone and it resulted in the best day of his professional cycling career. The hard man who could double as a lumberjack was brought to tears, having fulfilled a childhood dream. The emotional post race interview brought a tear to the eye. This topic is not a surprise, but is disappointing just the same. Every year the blow torch gets applied to someone at the tour. Last year it was Nibali, this year Chris Froome has copped the brunt of the drug conversation. After his blistering attack on the final ascent up the La Pierre-Saint-Martin on Stage 10, the doubters were out in force.

Froome's performance resulted in a spectator throwing urine on him during the race and screaming 'dope'. Froome called out some journalists who he felt had aggravated the situation with their irresponsible reporting, "I would blame some of the reporting on the race, it's very irresponsible. Those individuals know who they are."

To try and appease the suspicious sections of the cycling community, Team Sky released Froome's power profile and Froome himself also supported 24 hour testing and offered to undergo independent physiological analysis in an attempt to prove he's clean.

"Obviously, right here at the moment, my focus is on the race, but certainly I'm open-minded to potentially doing some physiological testing at some point after the Tour," Froome said. "If I can find an independent expert to analyse, or an expert from a physiological point of view, I'm open to doing that with someone."

If that wasn't enough, Froome was spat on Stage 20, climbing up Alpe d'Huez. Could you imagine if a footy player was spat on by someone in the crowd during a game? There would be absolute outrage, it would be front page news, and more than likely that person would be banned for life and probably charged with a criminal offence.

Due to the legacy of previous tour winners, the yellow jersey not only has to defend himself during the race, but afterwards as well. The 2015 Tour de France delivered - we won't be forgetting it any time soon.

Thanks Graham Watson for the great photos today and throughout the epic 21 stage race - your shots have been awesome.

What were the biggest moments for you in the 2015 Tour de France?