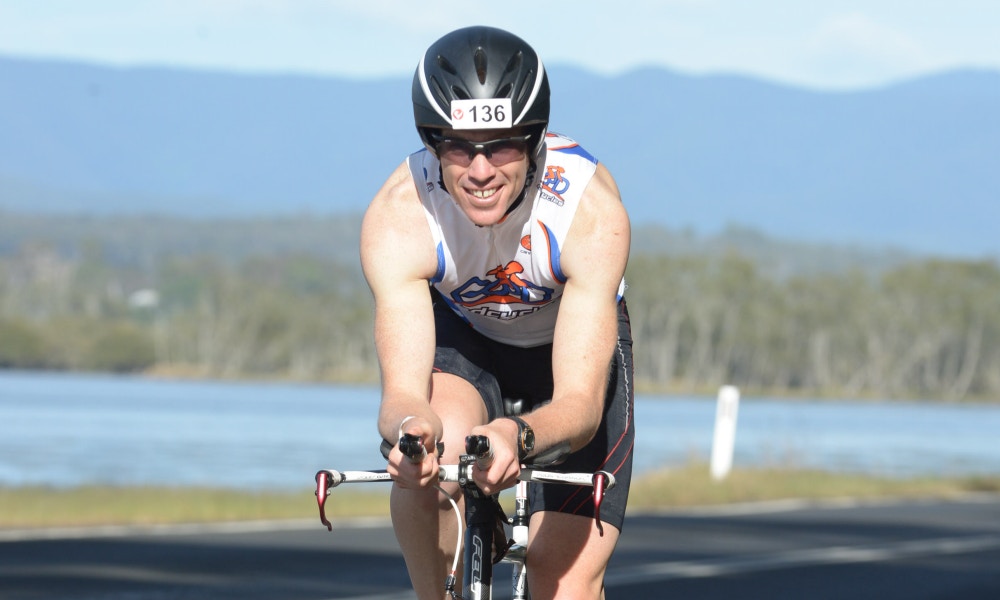 Anyone who's either completed an Ironman triathlon, or knows someone else who us, will appreciate the level of determination and dedication to get over that finish line. But for Steve Glowrey, the road is even more challenging, and the rewards even sweeter. We find out why.

Since 2001, Steve Glowrey has competed in (and completed ) 14 Ironman triathlons and around 30 70.3 distance triathlons – but he’s lost count of those.

And although plenty of us might argue that endurance and Ironman racing is taxing on the body, none of Steve’s expansive list of surgeries and scans has a thing to do with sport. Schwannomatosis isn’t your everyday ailment. It’s a rare genetic disorder that causes tumours referred to as schwannomas to grow on peripheral nerves around the body. If you’ve ever compressed, pinched or severed a nerve, you might get close to understanding the level of pain these nasty growths cause. Close – but not quite.

It’s not necessarily the schwannomas themselves that cause the pain, but the fact their presence presses on nerves or nearby tissue. At best, schwannomas will cause a tingling or numbness due to nerve or spinal compression. At worst they cause unimaginable pain and neurological dysfunction.

For Steve, his pain varies. A good day has just the occasional ‘ping’ with some moments of dull ache. A bad day is just that. Constant discomfort that is very hard to ignore.

So how – or why – does someone with severe nervous system pain put themselves through severe triathlon pain as well?

Steve grew up as one of three country boys running around burning energy in Gippsland, Victoria. He was an Aussie Rules junkie who also loved playing cricket, tennis, basketball and volleyball. In short – anything sporty he could jam into time out of school.

He began to struggle with significant back and right hamstring soreness as early as 1998 (aged 18). A very level-headed, measured personality, Steve worked to manage the pain and at one point had an epidural, which he’d thought was successful right up until the anaesthetic wore off after a few days. (For some perspective, it’s at this point we should say that Steve’s pain threshold is a bit like the number of Ironmans he’s completed – well above average. Without dramatising, what Steve might ‘mentally manage’ would probably have the majority of us on all fours screaming in agony).

Steve’s persistent symptoms became somewhat of an enigma until a chance encounter with a Physio in 2001 who, having crossed paths with Steve three years earlier, suggested he’d been in pain for too long – an MRI was warranted. One MRI very quickly escalated into an appointment with a neurosurgeon, and soon after that two rounds of surgery to remove three schwannomas from within his spinal canal.

The medical warning was clear – no more contact sport. Yes – but in true Steve form he wasn’t dipping his toe into a sprint. He went straight to the Canberra Half Ironman (where he was studying at University at the time), and then got a lottery spot for Ironman Australia 2002.

Just 12 months after two laminectomies, and Steve was headed from one world of pain right into another…

He remembers standing in transition the day before one of his first half iron distance events, and looking at the bikes surrounding him. It suddenly dawned on him – his was the only bike that still had reflectors on its wheels. He made a mental note – let’s get those off before Foster.

Unfortunately, the same realisation did not occur when it came to Steve’s wetsuit. It was not until after his first Ironman at Forster that Steve decided to ditch his surfing wetsuit, too – it didn’t really seem to be doing much in terms of open water swimming. So has the schwannomatosis now subsided?

Far from it. The tumours can’t be prevented and surgical intervention is the only recommended treatment. They can grow on any peripheral nerve throughout Steve’s body when and where they choose. At any point in time, Steve and his medical team are monitoring between five and 15 schwannomas.

How does he manage training for Ironman distances and dealing with the schwannomas?

During a regular review of Steve’s schwannomas, his neurosurgeon mentioned that he was preparing to present at a seminar on when to undertake surgery for schwannomatosis. Upon learning of this Steve chuckled and assured his surgeon, who is an endurance swimmer himself, that scheduling surgery is pretty straight forward:

He downplays the severity of it all, for sure, but the fact of the matter is it’s a process that’s worked well and has enabled Steve to live with his condition and maintain his passion.

His longest recovery time before getting back in to some sort of light training has been 12 – 13 weeks, during which he’s managed little more than some brisk walking – although he admits that his walking is not all that brisk during the recovery phase and laughs about being dressed in his running gear while being passed by women in high heels walking to and from work. His litmus test for riding is simple – if he can physically place his bike in the trainer, then he can give it a crack. If he can’t even get that far, then bike training has to wait a little longer. Once he gets on the trainer in those early days, it’s a matter of spinning his legs for as long as possible – which is sometimes as short as a tv ad break. That two minute ride signifies the return to training.

As any Ironman athlete will say, it’s a race that requires dedication and commitment. Although far too humble to admit it, Steve takes this to epic proportions. This is a man who loves triathlon and who has managed to pursue his passion through some hellish lows.

Steve knows the day might come when his body will not bounce back from surgery, but he believes that his triathlon lifestyle will help delay the arrival of that day.