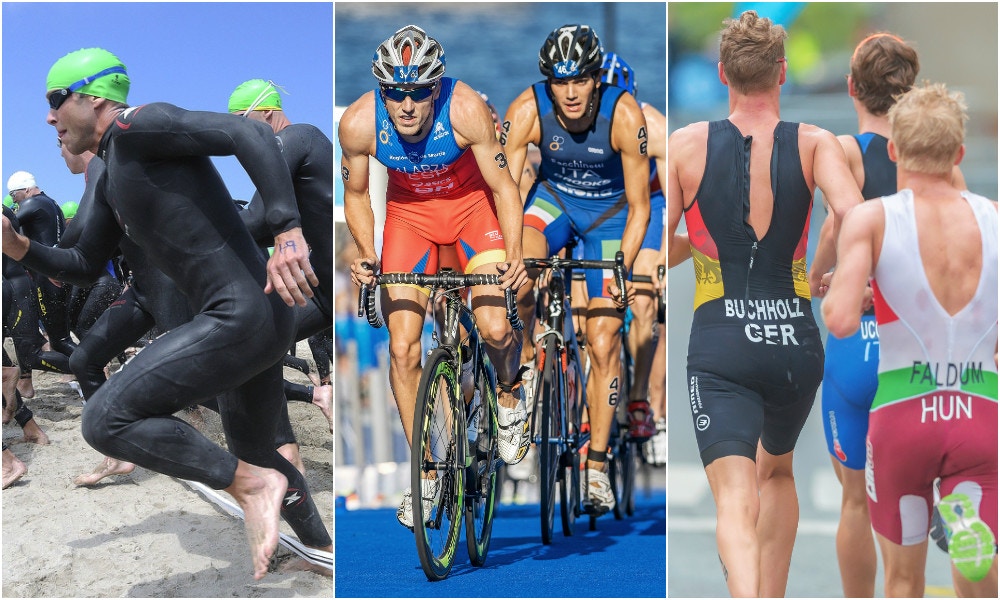 A triathlon always consists of the same three fundamental elements: a swim, cycle, and then a run. However, triathlons can vary greatly depending on the specific format. Some formats are raced at a high intensity and completed in under an hour, while others are virtually all-day endurance events taking up to 17 hours to finish. We've put together this guide explaining each common triathlon format, how each event came to be and some intricacies of each.

What is a Triathlon? A triathlon is a continuous event consisting of a swim, cycle and run. The distances of each 'leg' differ depending on the format of the event but the following is applicable to almost all events.

The swim is the shortest leg of a triathlon in terms of distance and time taken to complete, normally accounting for 10-20% of total race time. The swim is either a 'mass start', whereby every competitor starts at the same time or a 'wave start', where competitors are sent off in smaller groups. Depending on water temperature and swim distance the use of wetsuits may be permitted or banned and this ruling varies between elite competitors and age-group athletes.

The cycle leg is the longest element of any triathlon, normally accounting for 50-60% of total race time. The cycle leg may either be 'draft-legal' or 'non-drafting', which, we'll explain in more detail below.

The final leg is the run, and it's often said, 'ride for show, run for dough', highlighting that often the run leg of a triathlon is the difference between winning and losing. The run normally accounts for 25-40% of total race time.

The time for each leg plus both transitions makes up the total event time. The aim of a successful triathlon is to perform well during each leg without having an obvious weakness. It's also important to be organised, smooth and quick through each transition to not add unnecessary time to your total.

Below is a description of common triathlon formats. A sprint distance triathlon is the shortest of all individual triathlon formats and has been contested as an international championship event since 2010. The format is half the distance of an Olympic distance triathlon, consisting of a 750m swim, 20km bike, and 5km run. International sprint races are mostly commonly draft-legal (meaning drafting on the cycle leg is allowed) enabling elite athletes to complete the event in under an hour. Age-grouper races are likely to be non-drafting. The name gives this one away as the format used at the Olympic Games. Triathlon as an event debuted in the Sydney 2000 Olympics, the distances used were considered the 'international standard' at the time: 1500m swim, 40km bike, and 10km run. International courses can vary by as much as 10%, for example, at the 2012 London Olympics, the bike leg was 43km but still sanctioned as an Olympic distance course.

For elite competitors, Olympic events are mass start and draft-legal. For age-group events, it's far more common to see wave starts used to spread large numbers of competitors and prevent drafting during the cycle leg which is most often not allowed. The 'Ironman' triathlon was created in 1978 following a dispute over which athletes were the toughest and fittest: swimmers, cyclists or runners. To settle the debate, a select group of pioneer athletes decided to combine three existing endurance events raced in Hawaii; the 2.4mile Waikiki Roughwater Swim, 112mile Round the Island bike race and the Honolulu marathon. It was decreed that whoever won that event should be called an Ironman and it grew from there. The result was the first ever Ironman triathlon, contested by 12 brave people and 'won' by Gordon Haller in just under 12hours.

Ironman event finishing times have come down significantly as elite athletes now complete the event in under eight hours for men and under nine hours for women, incredibly impressive when you think they are exclusively non-drafting events. Age-group competitors have a 17-hour cut-off time to complete the 3800m swim, 180.2km cycle and full marathon run (42.2km).

The half Ironman is literally half the distance of an Ironman event, created as a bridge to the longer distance and a less daunting long course option. 70.3 as it is often referred to represents the distance of the event in miles. The format consists of a 1900m swim, 90.1km bike, and 21.1km run and is exclusively non-drafting.

The ITU (International Triathlon Union - the sports governing body) long distance triathlon format spawned from the standard distance of the day (now known as the 'Olympic' format) and has been contested as an international championship event since 1994. ITU long courses events are approximately triple the distance on an Olympic triathlon (although the exact distances have varied throughout the years): 4000m swim, 120km bike, and 30km run.

'Long course' is also a common term used to describe events longer than Olympic distance events, and so people may refer to a half Ironman or Ironman event as a 'long course' triathlon, although not 'officially' covering the same distances as the long course championships. The 'Team' or 'Mixed Relay' event is the relatively new kid on the block, being contested as an international championship event since 2003 and most recently pushing for selection as an event at the 2020 Olympic Games after narrowly missing out on inclusion in 2016. The event is completed in teams of four (two men and two women) across a 'super-sprint' distance triathlon. The event is fast and full of action, raced around spectator friendly courses making it a popular format. Each competitor will complete a 300m swim, 6.6km cycle and 1.6km run before tapping their teammate to continue the relay.

What is the difference between drafting and non-drafting events?

The two formats are 'draft-legal' and 'non-drafting'. Most age group and long course events are non-drafting, meaning you cannot gain an aerodynamic advantage by sitting close to a rider in front of you. Non-drafting events will stipulate a minimum distance (normally between 10m and 20m) you have to maintain behind the person in front of you when on the bike. As a result, most people choose triathlon specific bikes with time trial bar extensions for these events over road bikes to optimise aerodynamics, integration, comfort, and storage.

Conversely, draft-legal events, like ITU races and the Olympics Games, allow athletes to gain an advantage on the bike by drafting or working together in a group. In these events, time trials bikes are not allowed, and the road bikes used must adhere to similar conditions as the UCI road bike regulations.