Escape on a Dream Cycling Tour with Velo Tours 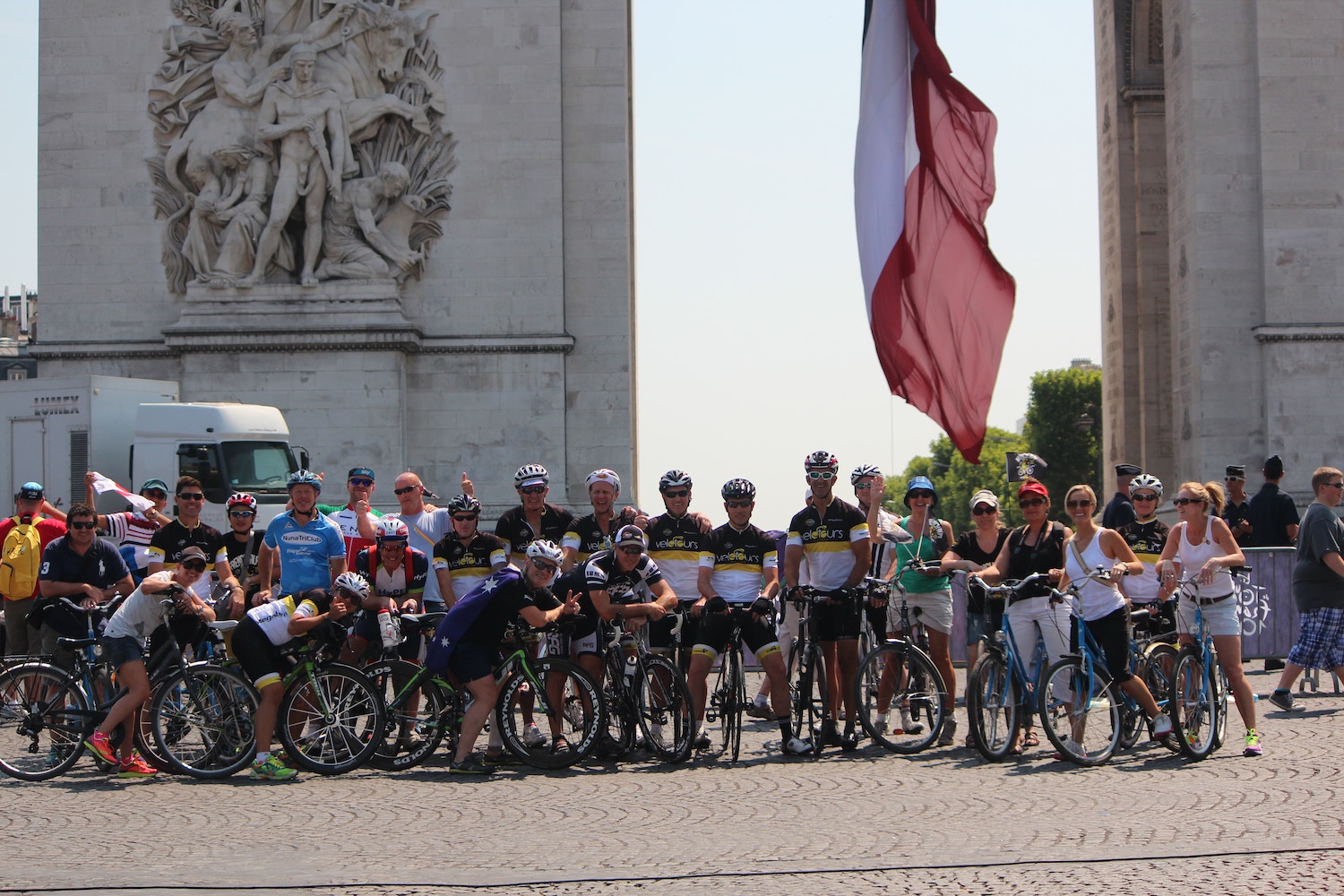 Do It, Don’t Dream It – Riding in France, Tassie and NZ

Long sessions in the saddle, legendary stage riding, seductive landscapes, French feasts worth writing home about; it’s the stuff of holiday dreams. For a keen cyclist there is no better time to be in France than during the most epic bike ride of them all – and Velo Tours does it in class. We caught up with Founder Kerry Stubbs to find out about their organised riding tours of France, Tasmania, New Zealand and plenty more.

Thanks for tearing yourself away from your life, which we now want. What led you to establishing Velo Tours?

Well in the beginning it was a bit of a pipe dream. I originally started the idea with ex Olympic triathlete Craig Walton. We got things going with tours around Tassie. It was an obvious first base – Tasmania easily has to be one of the world’s greatest cycling destinations. Nobody at the time was doing anything like it, so we did. It has just taken off and evolved since then.

Who comes on your tours? Are they cyclists who love the good life, or foodies who need to ride in order to keep signs of the good life from their hips?

Although it’s a combination of both, I’d say it is weighted more to cyclists. That said our tours cater for partners who maybe aren’t that into riding. We have exclusive days organised for them – visits to wineries, trips to small villages; something great and authentic to the area. On our French tours we are based in villages that have an abundance of activities – forest walking, paragliding, mountain biking; there are so many ways to get immersed in the culture and the fun.

The French tours are particularly great for mixed groups (cyclists and non-cyclists). Because we stay in the one place it means there’s no constant packing up, or spending long kms commuting. You arrive and you get involved straight away; you have full opportunity to really live like a local. We’re also a short trip from major cities so those who like to get out for some incredible shopping are always going to be looked after!

France, Tassie and New Zealand – definitely three of the most stunning places we can imagine riding around. What led you to select each of these destinations?

Back in the day, we did a lot of homework. We studied the history of the Tour de France routes over the years and we identified two areas through which it seems to always traverse, year after year. So Le Bourg d’Oisan (close to the iconic Alpe d’Huez) and Luchon became our bases. Both areas offer rugged, challenging and truly remarkable cycling; this is absolutely where the giants ride and where legends are made.

Tassie and New Zealand offer equally incredible landscapes for cycling, and village life that really welcomes you. The other major consideration behind these destinations is that they provide safe riding - this is so important to us.

The good news in NZ is that we’re soon opening a branch on-the-ground, so we’re excited to see where that will lead in terms of new adventures. Obviously your French itinerary is dictated by the Tour de France, but what about Tassie and New Zealand? Do you pinpoint different locations each time or is it a case of not changing something that’s pretty much already perfect?

These tours work so well and they’re so loved that we honestly have never needed to change a thing. However, we can offer bespoke tours as well. For example last year we were approached by ten handy cyclists from Brisbane. They only had five days but they wanted to ride around Tassie. Given they were all such strong cyclists we turned the usual seven-day tour into five, and we averaged 150km+ of riding a day. This was absolutely perfect for these guys – anything less and they wouldn’t have felt like they’d really given it a nudge.

We know there are a lot of tours out there that call themselves fully-escorted, and then interpret the term pretty loosely indeed. Velo Tours is absolutely fully escorted. We have awesome domestiques who take up the front, rear and middle of the bunch. We never rush anyone and have always seen a diversity of fitness and ability on our tours, but nobody feels left out or unable to reach their full potential; our domestiques make sure everyone rides to their ability.

Despite the mixed fitness, one thing that seems to always link everyone is a shared common interests. There’s nothing like finishing a day in the saddle with a cold ale in a pub and a quality yarn with everyone.

Take last year for example, we took a group of 12 cyclists from Melbourne’s much-loved Café Racer. These guys are all strong cyclists and pretty strong characters, but their tour also included a couple and a single police officer. So quite a combination. Well everyone just completely clicked and had a great time. My business partner Shane Smith joined us late in the piece on that tour, and he couldn’t believe the commeraderie that had formed between us all. We ended up hiring a boat and cruised the Seine in Paris ahead of the final day of the Tour.

If there’s one thing I really dislike about a cycling holiday, it’s having to do the washing. Do I have to wash my kit every day on a Velo Tour trip?

Hahahaha! We’re good, but doing your washing isn’t something usually on our agenda!

Do you have ‘experts on the ground’ assisting you with local knowledge, such as off-the-beaten-riding-track detours and which dodgy eateries to avoid?

We’ve upskilled our own people, to be honest. We’ve done that much riding over that many years, and our domestiques are such knowledgeable, experienced professionals that the finger is on the local pulse. This will be my seventh year of tours to France.

Do most people come with their partner, friend or people from their bunch, or do you get solo travellers?

All of the above. Every tour has a great mix of friends, mates from bunches, married couples, single people. We encourage that mix – we encourage people to come wanting to make new friendships. Meet awesome people, experience incredible riding; it doesn’t get much better than that, does it?

We deliberately keep our numbers low – 20 people max – so we have intimate, close groups and so that we can keep our people safe when out on the road. We don’t want to be massive – we want to be known as the tours that really look after you.

What is one of the most memorable experiences that has happened on a tour?

We’ve got to protect the innocent here… Ha! There is a range of things; I can’t pinpoint any single experience. From romances blossoming on tour to someone living their ultimate dream and getting to the top of Alpe d’Huez, it’s all memorable!

Now you’ve asked, though, it was two Tours ago we were on Alpe d’Huez when it featured twice along the route that year. We were on foot and carried an esky full of cold beer about 4km up to bend 18. Turns out we were only 500m from a pub… Anyway, we ended up attracting other Aussies spectating and they all just wandered over to bend 18. It became the Down Under corner. Everyone gelled and it was absolutely incredible – such an experience.

What does a day with Velo Tours look like?

OK so talking about one of our France tours… We’ll usually be up around 7/7.30am and enjoying brekkie within an hour after that. By 9am we’ll be on the bikes. Everything is booked given the volume of tourists around at the time, so we know where we will be eating. The riding is nothing less than incredible. I mean we are cycling in areas that are forever linked to the Tour de France; names that are engrained the world around with some of the most legendary riding on the planet.

Once the riding is done we’ll usually finish back at our accommodation. We’ve gone to great lengths to secure really spacious, beautifully clean, high quality chalets. All rooms have their own bathrooms. Anyway, by the time we get back we’re understandably pretty hot and sweaty, so we’ll wander down to the river and just cool off. Then we’ll get ourselves a refreshing drink, have a shower and prepare for a great meal. We’ll either go to a local restaurant for regional specialities, or we’ll have a delicious bbq back on the grounds. Each evening is different. All costs are included.

Je voudrais l’addition s’il vous plait! Yep it’s pretty average. But in all honesty we have developed great relationships with the locals, and we stay in country areas where people are just so accommodating and friendly.

Want to go on your own cycling adventure? Check out bike holidays here