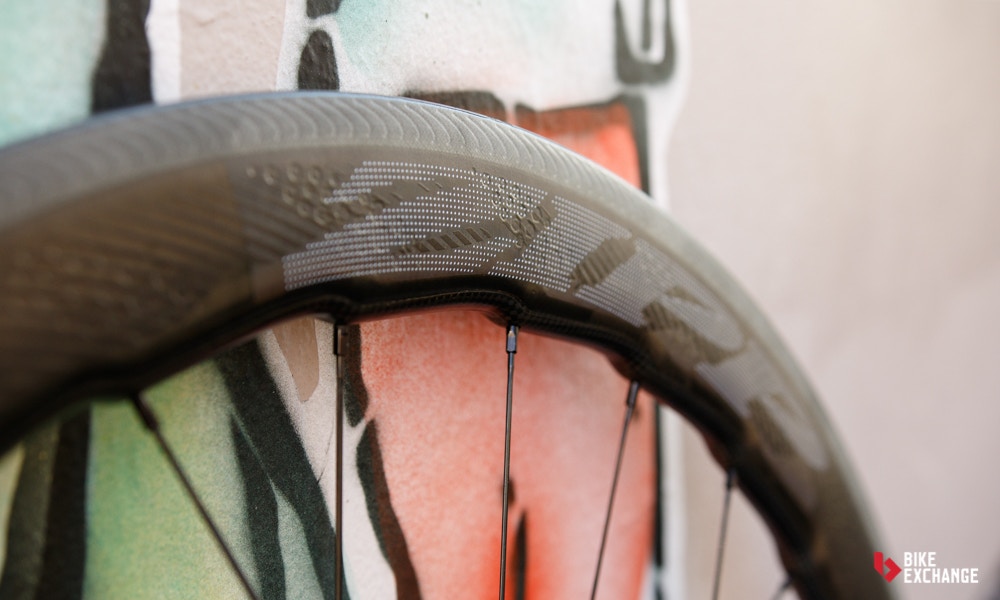 Zipp has always been at the forefront of wheel innovation and technology, but after four years of development and 36 prototypes, they may have come up with the next evolution of wheelsets. We got word that Zipp was about to drop something big, but a non-circular wheel profile is not something that many would have predicted. The latest creation born of the 'Nest' took the lead from mother nature and aims to provide the aerodynamics of a deep profile wheelset, the braking of an aluminium brake track, and the handling characteristics of a shallow wheelset.

Arise the 454 NSW Carbon Clincher wheelset. Here are the top ten things you need to know about the latest release from Zipp. The first thing you'll notice about the new wheelset is the undulating rim shape. Zipp has done away with the standard circular design in search of a rim shape that would improve aerodynamics, handling and enhance structural performance. The unique design is referred to as 'Sawtooth' and is intended to mimic the pectoral fins of a humpback whale, more on that later.

The undulating pattern also results in a change to rim depth, 58mm at the 'hyperfoil' nodes where depth is at its greatest, changing to 53mm at its shallowest point. Zipp says this pattern is comparable to 60mm rims with improved stability in crosswinds. It's not uncommon for manufacturers to look to other environments for inspiration, Zipp themselves previously sought inspiration for their dimpled surface from golf balls, swimmers shaved seconds off world records thanks to suits that simulated shark skin, and once again mother nature has provided the foundation for innovation.

Biomimicry is responsible for the latest design, whereby Zipp has looked to nature to solve a complex human problem. The Humpback whale and it's corrugated fins were the source of inspiration. Despite their size, these massive beasts have great manoeuvrability thanks to their corrugated fins that divide the resistance of the water during sharp movements. The same corrugated and asymmetrical rim pattern of the 454 NSW wheelset improves handling in strong crosswinds by reducing the side force, at the same time improving aerodynamics.

The 'nest' as Zipp refer to it, is a special facility in Indianapolis, Indiana that is considered the most advanced arm of the company. Those at the nest work on futuristic concepts, pushing the technological boundaries, out of sight from the rest of the Zipp family. All of Zipp's advanced development projects start in the nest, so you can be sure that any Zipp product featuring the 'NSW' label is at the forefront of design and innovation.

The two key factors driving Zipp were stability and aerodynamics, and the result is a wheelset with reduced aerodynamic drag at all yaw angles. We don't yet have exact figures from Zipp but the 454 NSW's are said to perform better at ALL wind yaw angles than the previous top-tier 404 NSW's. The final result came after a 'barrage of simulations using computational fluid dynamics and 252 test hours at Indianapolis’ ARC wind tunnel.'

The 454 NSW rim width is the same as the 404 NSW - 27.8 max width, 26.4 brake track width and 17mm internal width - so the improvements are due to the undulating Sawtooth profile and 'Hexfin' ABLC dimples. The HexFin dimples have a slightly different shape and have been configured differently on the 454's when compared to the 404 NSW's, resulting in a more targeted approach which improves airflow.

In addition to the aerodynamic gains, the increased stability in cross winds should further aid performance as you won't be spending energy fighting to keep your bike straight. The 454 NSW's tip the scales at a claimed 1,525 grams (690grams front, 835grams rear), a saving of over 60 grams compared to the 404 NSW's. It's a considerable saving when you take into account the intricate pattern and design, reducing the weight of what was already a lightweight clincher wheelset.

The spoke count of 18 front / 24 rear remains the same, as does the 'ImPress' graphics which prints graphics directly onto the rim, reducing weight and allowing the HexFin dimples to do their job without the interference of traditional stickers. Braking has forever been the most significant drawback to carbon braking surfaces, typically performing poorly in the wet and heating up during long descents and becoming inefficient. 'Showstopper' technology from Zipp aims to make that a thing of the past, and it appears they have succeeded. The new brake surface provides better grip via a roughened surface and moulded-in grooves. While the roughened surface improves performance in the dry, the grooves help clear water, providing better and more predictable braking in the wet. Preventing heat build up is the silicon carbide ceramic particles which are embedded within the high-temperature resin matrix of the brake track.

James Huang of CyclingTips recently took a spin on the 404 NSW Carbon Clinchers with Showstopper technology and was impressed with the braking performance, which he felt was, "even better than many aluminium rims I’ve used."

A treat for those out there that like to do their own servicing and maintenance is the external nipples. Although this may result in more care required over the long haul, ease of access is a bonus compared to if they were hidden away inside the rim. Another perk rarely thought of is that external nipples allow for a shorter spoke to be used, therefore creating a wheel that is both lighter and stiffer. Not content with improving the rim, the hubs (seen in the 404 NSW too) have also had a small makeover resulting in a robust design that produces lower friction and quieter freewheeling. The 'Axial Clutch' technology uses a pair of toothed drive rings, instead of a conventional ratchet-and-pawl setup, relying on a trio of small magnets to push the rings together. When a rider is coasting this ratchet mechanism disengages, and according to Zipp, delivers half the mechanical drag of conventional three pawl hubs.

What about other sets? The next logical question is, will this technology filter through to lower profile wheelsets such as the 202 or 303 equivalent, and will disc brake wheelsets get the same treatment? And putting a WorldTour rider's hat on, will a tubular version be available?

No word yet from Zipp if new wheelsets are a work in progress at the nest, but watch this space.

If you've read through everything the new 454 NSW wheelset has to offer and absolutely have to have them, be prepared to part with a considerable amount of coin.

They are expected to arrive in Australia later this month.