Getting their groove on at Naseby’s 12-hour challenge 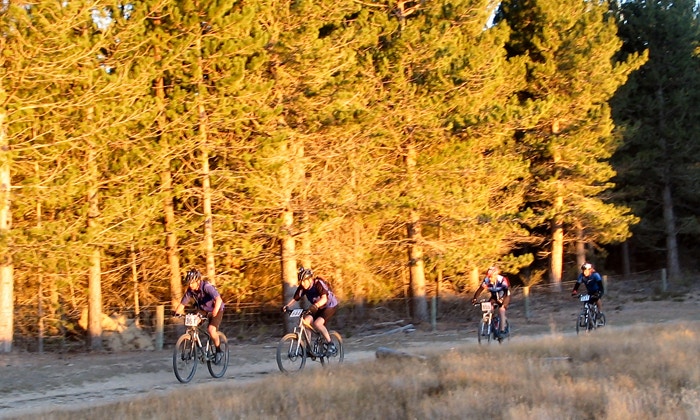 If you were one of 800 riders to get a ticket to Naseby’s tenth 12-hour mountain bike anniversary before it sold out in a record 16 minutes, then you’re in for a treat. On Saturday 5th April 2014 (the last weekend of Daylight’s Savings) riders will take off on an 11.5km course (taking approximately 30 – 40 minutes a circuit), comprising about 15% water and fire break routes, 10% through the Large View Motor Camp site and the remaining course on single tracks. At approximately 2,000ft, weather is generally fairly settled and conditions ideal.

Mountain bikers around New Zealand regard Naseby as one of the country’s most down-to-earth, festive and fun 12-hour ‘races’, and it’s been that way from day dot.

Mountain Biking Otago’s Event Director Craig Bates and then President Mark Gould came up with the idea for the lower half south island’s first 24-hour mountain biking event after participating in Rotorua’s Moon Ride over a decade ago.

They returned all fired up to bring something similar to Naseby and, with the help of R&R Sports (who remain their major sponsor), began with an inaugural 12-hour ride that attracted 350 Mountain bikers.

The event proved so popular that Mountain Biking Otago decided to keep the format, and the annual 12-hour ride has become the club’s biggest yearly fundraiser (this year it will generate some $20,000 to be invested in local track repair and maintenance).

Registrations are clipped at 800, which is essentially the camp facility’s capacity. There’s not a huge purse to entice serious riders, and that’s in part what makes this event so special. A whopping third of entries tend to be first-time mountain bikers in search of a social, friendly event into which they can dip their toe (or tyre, as the case may be) into water. Weekend warriors make up the bulk of the pack and only the peak of the registration pyramid is made up of super serious bikers. There’s a great atmosphere and camaraderie that sees regulars return year after year.

In response to public demand, 2014 will roll out Naseby’s first ‘Masters’ team section. This year is also going to ride back in time, with Mountain Biking Otago organising a 1970s theme. A 70s DJ will be pumping out the grooves for cyclists as they pass through the camp site each circuit and there’s a $350 prize from Aspiring Environmental for Best 70s Camp Site, a Canadian Goose filled jacket from Alpine Distribution for each of the best dressed male and female and a $100 retro bike dash for cash. A disco-style light show will also kick in once the sun goes down.

If Naseby sounds like your cup of mountain biking tea, keep it on your radar for 2015 – you’ll need to be quick!