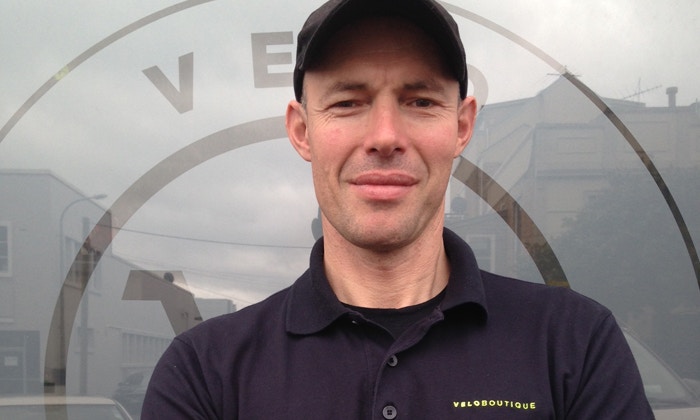 “Not too many people in this world are Cameron Browns or Chris McCormacks. Then again, it’s people like me who keep those fellas looking so amazing!” jokes Jianni Koutsos.

In fact, during the course of our chat, there was a lot of joking from the former ITU pro and 17-times Ironman finisher. But in-between the good-natured expletives and laughs was a hint of someone who’s done plenty of hard yards to get where they are today.

Jianni was a naturally sporty kid growing up in NZ. He went to boarding school where he was exposed to the usual mix of rugby, school sports and biking. He loved to cycle and when back at home, would often jump on his bike, wave ‘see you later’ to his mum, and then return as dusk fell. It was during those later school years that he became injured playing squash, and his Physio suggested swimming as part of his rehabilitation. The fuse was lit. He loved the water and it didn’t take him long at all to stitch the swimming with riding and running. He did his first triathlon with mates and it was hook, line and sinker. He knew he was a goner for the rest of his life – triathlon became Jianni’s drug addiction.

Getting into the national team was a challenge so Jianni drew on his Greek heritage (both parents hail from Greece) and raced ITUs for the mother country. He spent a vast portion of his young adult life travelling the globe, following race after race. He loved seeing the world through sport, meeting like-minded people, and the buzz of camaraderie that came with training and racing.

Jianni didn’t have a bike sponsor – on the contrary the bikes he used during his racing career were all custom made. The ride wasn’t his killer discipline, either. In Jianni’s words, his strength was combining all three versus any single stand-out leg.

Jianni was 30 years old when he stopped racing ITU professionally and turned to Ironman as an age-grouper. Some might consider that late-blooming but for Jianni, he’s a big believer in giving the body ample time to adapt and develop a base before flogging it at Ironman distance. Still – with 17 Ironman races in the last 17 years you can’t help but think his body has certainly been through the paces. His stand-out race was at the age of 40 when he clocked 9:25:25 in Kona – a cracking pace, yet 20 minutes off his fastest time ever (9:05 in Ironman NZ in Lake Taupo).

Jianni now owns and runs Auckland’s Velo Boutique, where his philosophy is all about fitting the bike to the person before the sale, rather than after it. To that end, he stocks plenty of brands, including Passoni, Guru Bikes and Merida. He still gets out on the bike every day but he’s not racing like he used to – he’s downscaled his addiction.

In Jianni’s mind, today’s age grouper Ironman athletes sometimes fall victim to putting all their eggs in the one basket. They focus on the race rather than the journey, so if things don’t pan out well on the day, then they feel the last ten months+ have been a waste of time. They train like a professional, putting 40+ hours a week into the sport, but they don’t race professional. In Jianni’s words – unless you’re earning an income from the sport, then you’re not a pro. So there really has to be balance.

As fervent a worshipper as he might be at the altar of triathlon, Jianni still believes there’s more to life than the sport alone.
“To become a great Ironman athlete you need a solid ten years of training. You need to race 70.3s and Olympics for some time and you need a good coach who understands you should have other commitments in life as well,” believes Jianni.

All that philosophy is proving valuable now as much as it did when Jianni was back racing – he’s quietly passing on his addiction to his ten year old son, whom he hopes to one day train into a great athlete.

We can’t help but wonder – will it be NZ or Greece’s medal tally that gets a Koutsos boost in 2020…?