Taking Motherhood in Her Spin 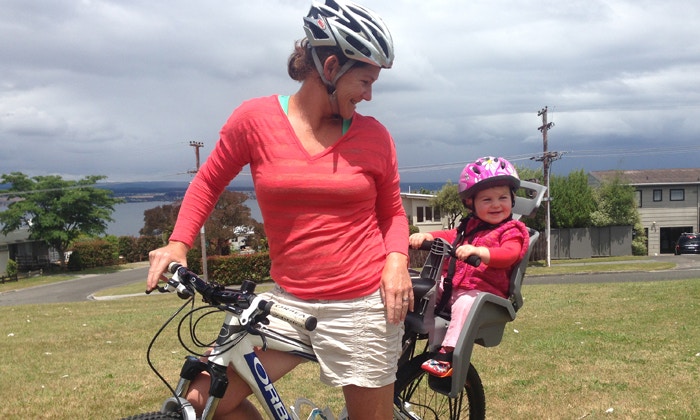 The florists are getting ready for a hammering but we know that plenty of mums will be using Mother’s Day weekend as a chance to get out for a bit of a spin. We touch base with Sue Brewster (nee Dorman) who no doubt will be doing just that, with tiny tot Bessie on board…

Sue and her 22-month old daughter Bessie Brewster are a common sight around the streets of Auckland. The two get around on Sue’s mountain bike whenever and wherever they can – to and from day-care, over to Sue’s mum, out running errands… Any chance she gets Sue will take off with the duo on two-wheels versus any other mode of transport.

It’s no different to before the arrival of Bessie, really, when Sue was on the bike and out on the road at up to 20 weeks pregnant, before running in-door wind-training sessions until 30 weeks.

Here’s a mum who seems to have taken motherhood literally in her spin.

Working part time as an Operations Manager at a local sports centre, running Creative Triathlon Coaching, her own professional triathlon coaching business, and being mum to Bessie all make Sue one ultra-organised individual. She has no alternative – to get it all done requires her staying a day ahead and planning for everything, including unexpected surprises and/ or bouts of sickness from little Bessie. Having a well-oiled routine also helps not only Sue’s business but Bessie’s day-to-day as well.

Originally a competitive triathlete, Sue recognised a niche for coaches in the sport; and specifically to coach women who were new to the concept. When she first dipped her toe in the coaching water she was the first female to do so at North Harbour Tri Club. As we know, the sport has gained so much momentum here in NZ, and shows no signs of slowing down. Women in particular are drawn to the social aspects of group training, and really enjoy networking with other like-minded athletes; be they beginner, social recreation, or more competitive.

When Sue first became pregnant she realised she would not be able to keep doing everything at the same calibre; a choice was made and she opted to forsake competitive racing for professional coaching. There’s no doubting she’s still handy on the bike though, as her recent training camps earlier this year proved. But it’s not all work – she’s been known to get the girls together for a group ride to the wineries (picked up afterwards by the husbands).