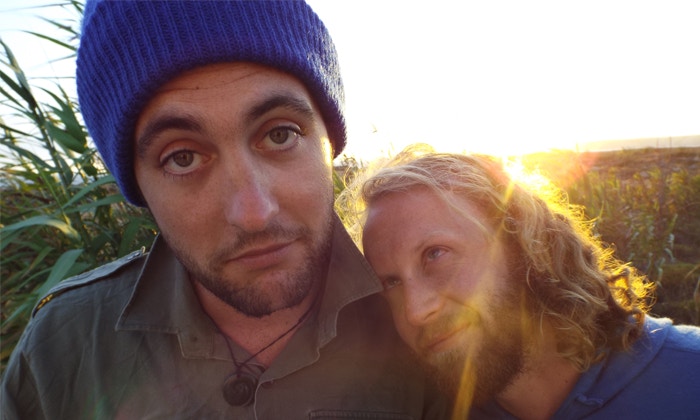 Cycling and backpacking around Portugal with Nicholas Ryan

Nicholas Ryan is not your average Kiwi backpacker. Last year, he and his mate Jamie decided to spend 20 Euros each on some beat-up old bikes found in a market, and cycle them around Portugal following the festivals. In the middle of summer. We knew this would be a story and a half, so we dug a little deeper…

Nicholas, where did you grow up? How old are you?

Did you do any cycling before Portugal or did you get a baptism by fire?

I'd always owned bikes that I would ride to the dairy or around the neighbourhood, but I would not call myself a professional cyclist! Cycling on rickety bikes which changed gears whenever THEY felt like changing, wearing shorts I cut out of an old pair of jeans and jandals or bare feet depending on the mood at the time. The longest ride I'd done before this was probably cycling from Tata beach to Takaka town on a whim during my Christmas holidays about five years ago, a staggering distance of about 20km.

It was decided on a whim to take bikes. The cheaper and nastier the better. We hadn’t really thought about our steed's until we touched down in Porto.

How long did the trip take?

The trip took about 2 and a half /3 months with a 2 week gap in the middle where I went to Spain and Jamie went to Croatia.

Where did you go?

Basically we covered most of Portugal. From Porto to Coimbra, Lisbon to Lagos then back up the middle of the country to Evora and Castello Branco.

I could rave about the Portuguese for days...The Portuguese are absolutely amazing. They are the most welcoming, friendly, patient and hospitable people I have ever had the pleasure of coming across. Everyone we met bent over backwards to help us and I have made friends I will have for life. We were even adopted by a Portuguese family so I now have another mother and father whom I love very much.

Is bike riding part of the Portuguese culture like it is in other Euro countries, or were you guys a novelty?

Cycling is a part of Portuguese culture to some extent but only because Portugal is so desperately poor. In the villages people cycle everywhere, they simply can’t afford cars. In the cities not so much. I never really thought; wow there’s a lot of bikes here. We were certainly a novelty. We only saw two other groups of cycle tourists. One was an old hippy couple and the other a group of three Portuguese guys riding to Morocco with their parents in a camper van trailing them. At one point we were actually snapped by a photographer covering a classic car rally as we went up Serra Estrella.

Did riding a bike around Portugal give you insights/ experiences/ adventures that you're sure you would never have had using other modes of transport?

You see, smell, hear and feel so much more on a bike. I wouldn’t want to travel any other way. We got to meet a lot of people because of our bikes. We went to places only bikes can go. I think being on a bike gave us the freedom we were craving. What were your biggest (bike related) challenges?

My bike 'Ingrid' was an old white mountain bike. Jamie’s bike was an ancient gold coloured roadbike from Morocco named 'The Champ'. We got them for 20 euros a pop at the Porto thieves market. I warned Jamie about The Champ but he wouldn’t have it, and to his credit he was very, very patient with it. He blew out a tyre heading down Serra Estrella (Portugal’s highest peak) going very, very fast. He genuinely thought he was going to die but the I think what hurt him more was the fact that (after pushing both fully laden bikes back to a crossroads) he finally realised that without a spare (he'd used two already that day) his ride down was over. So once he managed to thumb a lift I had the distinct pleasure of riding down alone. Smug as.

Ingrid didn’t give me too much trouble if I’m being honest. I only kicked her once when the gears slipped and I ripped open my toe. I apologised profusely to her for my indiscretion. I had to realign and adjust my brakes every single day and I never really had any confidence in them at all. It would, on average, depending on speed, take me 50 or so meters to come to a full stop when heading downhill. The Champ was much the same except that when The Champ’s brakes engaged, an almighty screech was emitted, much like those flying nasgouls on Lord of the Rings.

I also blew a couple of spokes at different points. One I got fixed by a chainsaw mechanic for 2 euros and the other was fixed by a portly man in a lonely village. We only found him because I was pushing my bike through the village and a lady stopped and beckoned me to follow her. Turned out her brother was the local bike expert. He gave me one of his bikes so we could get to the beach and camp, then next morning we picked up Ingrid, good as new, and carried on our way. We worked out that over the trip Ingrid had around 20 euros spent on her. The Champ was more expensive, maybe 80 euros but Jamie had to buy new tyres weekly because the bike was so old that no modern tyres fitted properly and would explode at random.

We learned a lot about bikes very quickly. The first festival we were at was an eye opener for us because we didn’t actually own a proper bike tool, let alone tool kit. A friend of my friend was overheard saying 'who the hell goes cycle touring without a bike tool; they're effing mad," at which point we decided to invest. And thank goodness we did. Tuning brakes and making running repairs became a daily ritual. Jamie was much better at it than me but as I said, my bike didn’t give me as much bother.

What were the biggest highs?

Riding down Sierra Estrella with dodgy brakes. Reaching the top of Serra Estrella (2,000 meters) and finding an open bar at the ski field. Everything was a high, though, really. Every time we set off we had big smiles on our faces. Portugal has probably never heard so much joyous whooping and hollering. What were some of the stand-out stories?

When I look back on it, and put myself in the heavily glossed shoes of the Portuguese border agent that greeted two scraggly kiwis carrying tatty old panniers proclaiming their desire to cycle around his country in the height of summer, I can understand the hearty laughter which emanated from deep within his belly as he explained our plans to his friend in the next booth, who also laughed so hard he had to stop processing the group next to us.

I did have padded bike shorts, which is more than could be said for Jamie. He left his to air on a log when we camped by the river on our first night. In the morning they were nowhere to be seen, neither was one of his shoes nor his favourite L&P singlet. The only clue was paw prints from a giant dog...lesson one learned.

It took us two full days to climb Mouro, at one point we hid in a bus stop for 5 hours to escape the heat and only left when the shadow was too small for both of us to cower in. We stopped at every font and filled our drink bottles with crystal clear mountain water, we cycled through mountainside villages where old women led donkeys into tinder dry pasture and old men passed the day smoking in the shade. The moment we hit the top of the hill and looked down as the whole of Portugal spread out before us was the most rewarding thing I’ve ever experienced.

We were cycling in Portugal, we were completely free, we camped where we wanted and explored any road that interested us, what did we have to complain about? We settled into a routine. Up early for muesli and nectarines, ride till midday, hide from the sun in village squares, band rotundas or under trees till 5, then hit the road, ride till it got dark, find somewhere to camp, have a feed and a chat, hit the hay, then get up and do it all again.

It was the best experience of my life.

What happened to the bikes once you finished with them?

The night before I left Portugal the bikes were stolen from outside the front of the hostel. It was of course extremely disappointing because we had been through so much with them and I had grown extremely attached to 'Ingrid'. But In a way it’s kind of poetic. I mean, it’s comforting to know that they will most likely end up back in the thieves market where we got them from originally. I often wonder where they got to and if the person riding now knows just what they've been through...

Any plans to take this idea to another country?

Africa and China have been mentioned but no plans as yet. Jamie is working in the Seychelles for the next six months and I am in England. I am very keen to do another adventure, as is he; a much longer one this time. But in all honesty I think I would invest at least 100 euros on a bike this time...maybe less :)