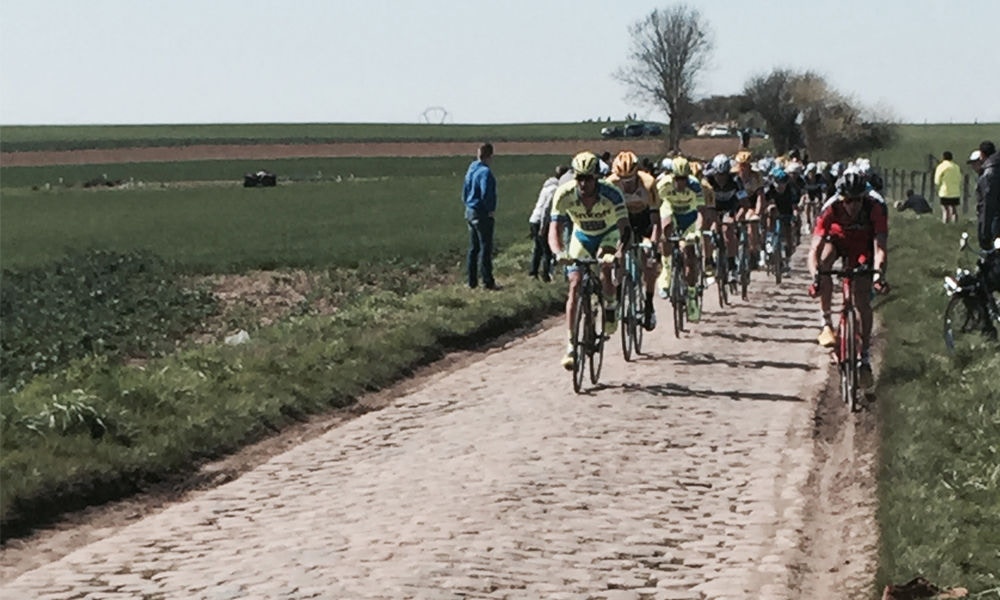 The Queen of the Classics is here!

The 113th edition of Paris Roubaix, otherwise known as the Hell of the North, saw the riders cover 253km with 52.7km of some of the harshest cobblestones imaginable. These brutal sections of pavé sort the men from the boys and break as many hearts as they do legs. Only the strong win this race, which makes this edition so intriguing as arguably the two strongest classics riders in the peloton were out of contention.

Even with all the drama of the race, there were sub-plots to be played out:

Can Wiggo’s last race in Team SKY colours end in victory? Can anyone stop the white-hot form of Alexander Kristoff? Can Etixx – Quick-Step get their tactics right and come away with a victory this spring?

The race began with perfect weather that would have come as a massive relief to most of the peloton. Despite the conditions crashes marred the first half of the race, the first sector of the day bringing a particularly big crash that prematurely ended the race for many riders.

Nine riders broke away at the 30km mark and were able to hold a comfortable break over the main group, hovering around the 7-min mark for most of the race.

With 100km to go a significant increase in pace was apparent, the Trouée d’Arenberg was approaching and it became a sprint to the entrance. Team SKY were drilling it on the front, Bernie Eisel chaperoning Wiggo as best he could. Not to be out done Lotto Soudal had their time at the front of the race, their efforts cutting into the breakaways advantage.

The Trouée d’Arenberg, a 2.5km, 5 star sector of the cobbles, signified one of the harshest sections of the race. Through this section the riders were visibly fighting with their bikes, looking as though something was coming up from underneath, trying to shake them from it.

BMC Racing Team took over on the Trouée d’Arenberg, stretching out the field and toughening up the race for their man Greg Van Avermaet. Great signs for the Australian National Champion Heinrich Haussler, who came to front in the final few hundred metres of the sector showing his form and confidence. Despite an average speed of almost 40kph across the 5 star cobbles, the peloton remained as one with 87km still remaining.

Unimaginable scenes saw a train gate come down mid race, cutting the peloton in half and leaving some riders counting the painful slow seconds until they could rejoin the race. Other riders taking extraordinary risks and crossing the tracks, determined not to lose touch.

Drama continued as Geraint Thomas went down on a seemingly innocuous section of road. Thomas would rejoin the race but as he did Etixx – Quick-Step went to the front and began to make the selection on the long cobbled sector of Hornaing.

Approaching the 200km mark of the race, the average speed was a remarkable 44.4kph, but the peloton was still unusually large.

With 67km to go it was again Etixx – Quick-Step that came to the front of the race and began to turn the screws. Five Etixx – Quick-Step riders caused a split as they took the race to the gutter in the crosswinds. A select group was formed which included Ian Stannard, Peter Sagan and John Degenkolb. The peloton yo-yoed off the back as the unrelenting pressure applied by the Etixx – Quick-Step team became too much.

The kilometres continued to fall away as did the numbers in the main group. With 50km to go a significantly smaller peloton was left to contest for the victory.

Another 5 star cobbled sector, the Mons-en-Pevele, again brought a significant increase in the pace with everyone wanting to have a clean run through. An average speed of 32.8kph through the 3km sector highlighted just how tough these cobbles really are.

Stijn Vandenbergh of Etixx – Quick-Step made the first real decisive move from the peloton, attempting a solo breakaway, which also served to momentarily take the pressure off his team.

With 30km to go Wiggins made a big move, jumping from the peloton and catching Vandenbergh in a matter of seconds. Those two were quickly joined by Jens Debusschere and Zdenek Stybar. Sensing the danger, Team Katusha quickly shut it down.

The anxiety in the peloton was palpable with only 20km to go and all the big names still in contention. Lots of small attacks were attempted but the only one to stick was that off Jurgen Roelandts of Lotto Soudal and Borut Bozic of Astana Pro Team.

Jurgen Roelandts hit the 5 star cobbled sector of Carrefour de l’Arbre in the lead and alone, having ridden Borut Bozic off his wheel. By the end of the Carrefour de l’Arbre the race was back together and the counter attacks began. Greg Van Avermaet of BMC Racing Team and Yves Lampaert of Etixx – Quick-Step got away and had a small 13 second lead with 9km to go. John Degenkolb of Team Giant – Alpecin bridged across with 6km to go, sensing this could be the winning move. These three were joined by another Ettix – Quick-Step rider, Zdenek Stybar with three km to go.

Another three riders were painfully close to the leaders and inching closer and closer as the finish line approached. Lars Boom of Astana Pro Team, Martin Elmiger of IAM Cycling and Jens Keukeleire of Orica-GreenEDGE finally catching the leaders as they entered the velodrome.

With 250m to go there were still seven riders with a chance, but John Degenkolb was a level above the rest. Having done all the work earlier to bridge across to the leaders, he proved he had the best legs at the finish. Waiting patiently in second wheel, Degenkolb opened up the sprint with 150m to go, and easily gapped his fellow escapees, winning comfortably in the end and taking his second monument of 2015. Etixx – Quick-Step again taking second position on the podium with Zdenek Stybar narrowly edging out Greg Van Avermaet.

An epic day that had so many moves, super aggressive racing and kept us guessing until the final lap of the velodrome.

Get more from our everything bike blog here