Orica-AIS Cap Off the Perfect Summer 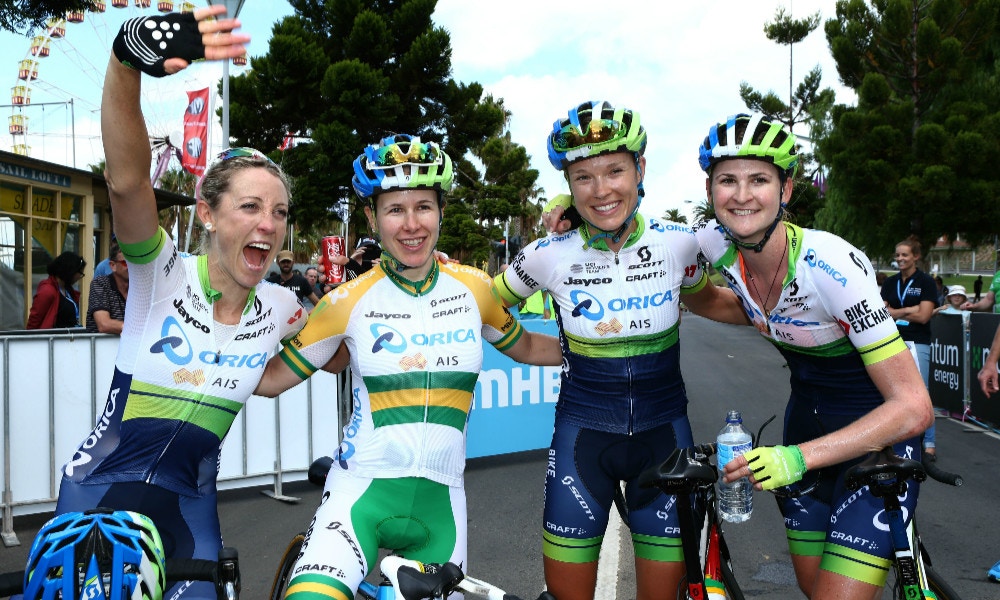 GEELONG, Australia (CT) — Amanda Spratt took out the women’s Cadel Evans Great Ocean Road Race with a solo run to the line on Saturday, finishing off a dream run in Australia’s summer season of racing for the rider and her Orica-AIS team.

Teammate and defending champion Rachel Neylan made it a one-two for Australia’s only UCI registered women’s team, taking out the sprint for second with Danielle King (Wiggle High5). Neylan was able to sit back and let the British rider do the work on the run in to the line as King did her best to reel in Spratt, who is reigning Australian national road champion. “So I guess the aim now is to take that into the European season and aim for bigger results there as well,” said Spratt.

The first half of the 113 kilometre event, called the Deakin University Elite Women’s Race, was relatively quiet with just a few early digs. Verita Stewart and Kate Perry from Specialized Women’s Racing were among the protagonists.

The new holder of the UCI World Hour Record, Bridie O’Donnell (Rush Women’s Team), was also active in the first half. She snuck in a couple of sprint wins and as a result took out the sprint jersey while working at the front for her teammate, two-time National Road Series winner Ruth Corset. The first break that held for any distance was over halfway through the race near Bells Beach. Jessica Allen (High5 Dream Team) pulled out a gap of over 20 seconds, took the Queen of the Mountain points and was then joined by Taryn Heather (Bikebug-NextGen) who helped extend the break to over two minutes while there was little urgency within the peloton.

The chase was organised as the cross winds looked like they were starting to kick in, but they didn’t have the force to cause the damage that some feared and others hoped for.

“We knew that the wind could potentially be a really important factor in this race, so we knew we had to be attentive and be at the front, which we were,” said King. “There was never a point at the race where there wasn’t a Wiggle High5 rider near the front to make sure if anyone started an echelon or if the wind changed direction, we were there.”

With Orica-AIS and Wiggle High5 going to the front the pair of Allen and Heather were caught with little more than 30 kilometres left to race and the peloton shrank to less than 20.

The attacks were coming thick and fast until Neylan and Chloe Hosking (Wiggle High5) got away. Hosking, a noted sprinter, happily sat on Neylan’s wheel, until with less than 20 kilometres to go a small group including Spratt, Tiffany Cromwell (BOSS Racing Team) and King joined the pair. Spratt took off alone and it was Hosking’s turn to work out the front while King and Neylan sat on her wheel. Hosking worked hard to narrow the gap to Spratt for her teammate King on the hilly roads and then with about eight kilometres to go it was just King and Neylan.

The gap to Spratt stretched as King chased alone while Neylan sat on her wheel, so the Australian champion had a clear run to the line. Then 49 seconds later Neylan sprinted to take second place ahead of King. The race, which starts and finishes in Geelong, is in its second year and as well as being part of the National Road Series it secured a 1.2 UCI classification for the first time in 2016. It’s the first year in many that Australia has hosted a women’s UCI classified race at all, and with the Santos Women’s Tour also gaining a ranking of 2.2, this year there were two.

At the inaugural 2015 edition of the women’s Cadel Evans Race, Rachel Neylan took the victory, adding to a second place performance at the Australian National Road Championships and paving the way for a return to professional racing.

“It’s wonderful to win a race solo, to do what I did last year, that really set me up and it was my platform to get a ride on Orica,” said Neylan. “But I tell you what, the feeling today of doing what I did and contributing and setting up my teammate for the win … and just giving everything to executing the perfect team plan is really special and it does beat doing it on your own.”

Orica-AIS has dominated the summer season of racing in Australia, where the races are bolstered by the return of Australian overseas-based cyclists plus a few other top-level riders seeking warmer climates. Riders from the team have taken out all the big January races, with victory at the Australian National Road Championships time trial and road race, the Bay Crits and the Santos Tour Down Under.