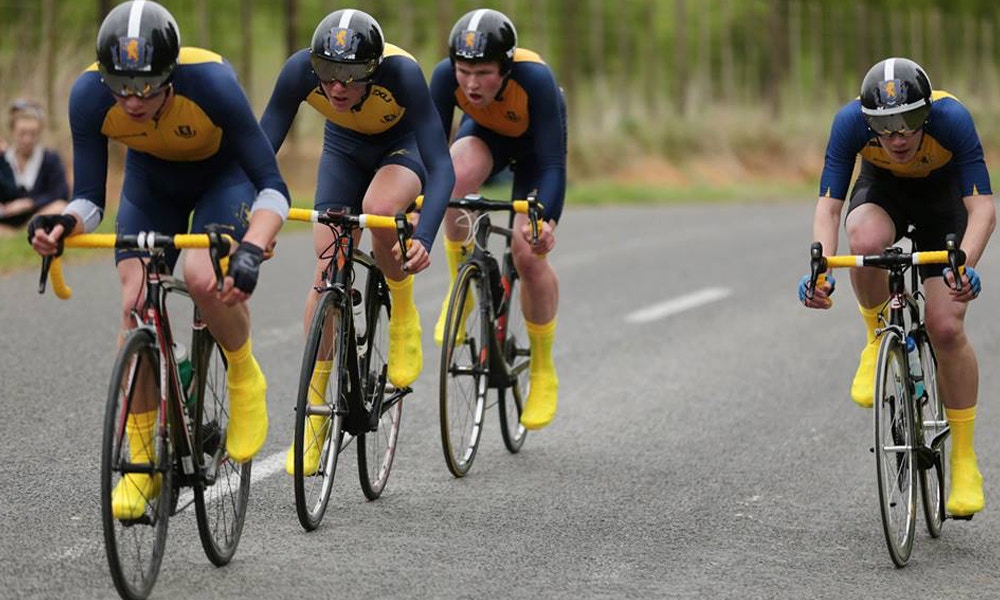 Auckland Grammar School’s Cycling Squad has been running for longer than its Teacher in Charge of Cycling, Geraldine Marson, can recall.

As the interest in bike riding has grown exponentially in New Zealand, so too has the Squad’s membership level, which is now sitting at 40 students from Years 9 – 13.

Geraldine attributes part of that growth to the Auckland Team Time Trial Series, which has captured the imagination of many local schools and individuals who are keen to battle it out for the highly coveted Sir Bernard Fergusson trophy and soak up the tight community culture so inherent in the world of cycling.

Although the Auckland TTT is the annual ‘main event’, it’s undoubtedly the Nationals, held each September in Palmerston North/Manawhatu that is the real show-stopper, and has the boys training hard. The Squad forms part of the school’s extra curriculum sporting activities (Road and Mountain Bike are kept separate from one another, although certain students do cross over into both, along with rowing for summer cross-training) and is considered a winter code, so it runs across terms two and three.

That said, come late term one and students are already working to get their cycling legs back.

By the pointy end of the season, the more serious Squad members will be averaging five – six sessions a week with additional training recommended by coaches (led by Senior ‘Supercoach’ Aaron Strong) when necessary/ beneficial. Testimony to their commitment and dedication is the fact so much of their training takes place in the depth of New Zealand’s winter. Most of us love a spin when the sun’s out and the breeze is behind us… But try the dark, cold evenings of a Kiwi snap freeze time and time again, and then you get a sense for how driven these lads are.

Some years back the school’s cycling dominance was under threat from increased competition. Rather than taking the back wheel, the school appointed supercoach and A-level cyclist Aaron Strong of Steel Springs along with a junior coach (and former Auckland Grammar student). The engagement has seen a return to form for the school, which now maintains its dominance during the race season.

According to Strong that hunger for top of the podium is exactly what the serious budding cyclists will need if they’re to turn their talent into a career.

“It’s incredible. Even when they’re perhaps not at the top of their physical game, Auckland Grammar students have an innate ability to pull something out of the bag on the day, lift their performance and just deliver. They are remarkable,” he says. This said however, Strong is adamant the Squad must ultimately be good fun.

“I want to help develop cyclists for life, not kids who are so worn out come end of high school that they have no energy left for anything,” he said.

When asked whether there is a unique Kiwi characteristic shared amongst the country’s pro cyclists, Strong doesn’t hesitate.

“Kiwi cyclists who do big things overseas have all done the hard yards. They’ve fought to get where they are. Getting into those foreign teams is no simple task. I think New Zealanders have begun to develop not only a reputation for toughness, but for a very robust work ethic. Team Managers overseas see this and respect it,” he said.

Kiwi cycling sensations Sam Webster and Aaron Gate are two of the luminaries to develop their talent whilst at Auckland Grammar School and in the Squad. The gents return every now and again to their hometown and check in on the current bunch.

Auckland Grammar has a great tradition of hosting a dinner each year as part of the Nationals. At one such occasion Gate attended along with his Bronze Olympic medal (team pursuit with fellow riders Sam Bewley, Marc Ryan, Jesse Sergent and Westley Gough). The bling was passed around to every student present and certainly left an impression on the students.