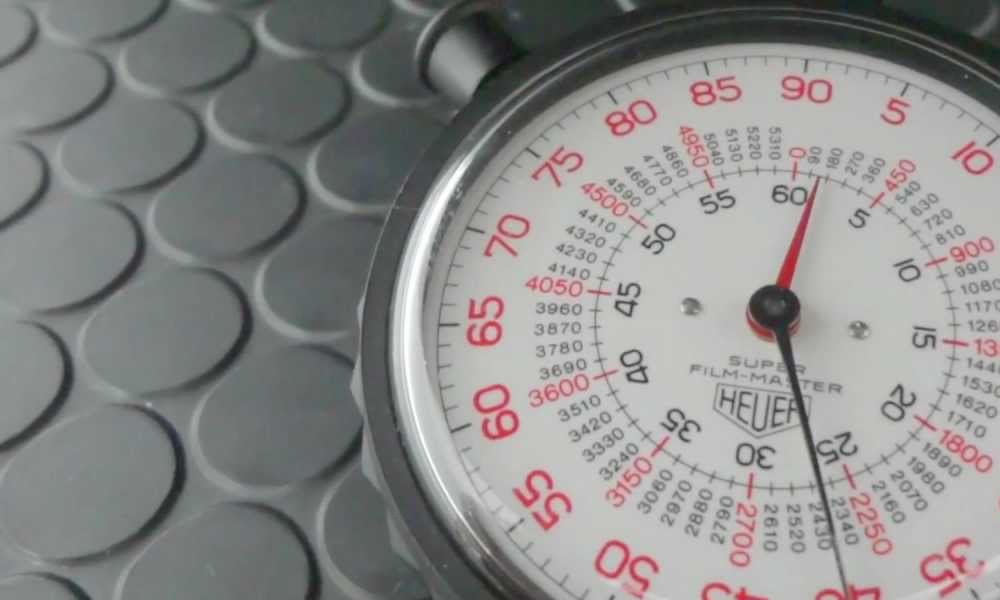 What is key to a race? How do athletes become legends? Is it how far the go, how fast they go, how high they go, how strong they are? Absolutely, it's any and all of these. But without the means to measure their performance, records can't really be created.

When it comes to performance sport, we measure success. And more often than not, it's the clock we call on to tell us who the legends are.

Time can be the difference between wearing a yellow jersey or not, between gold and silver, between sponsorship hits and misses.

We find out what’s involved.

Get the latest bike news here

It started with some TAG Heuer timing that was gathering dust…

Aaron Clarke was working as a Logistics Manager with TAG Heuer when one day he walked into a room at work and discovered a bunch of timing equipment gathering dust. Intrigued, he took it home to have a tinker with it all.

Some weeks later a ski resort contacted the office wanting support for some timing equipment. Little did they know that although the parts were TAG Heuer, the business’s Australian division was focused on watches, rather than timing equipment (and to this day these remain separate divisions in the company).

In short – ordinarily nobody would have been able to assist.

The receptionist taking the call however knew Aaron had recently started to get his head around the spare but otherwise neglected equipment, and thought he might be able to help. The ski resort problem was soon solved.

Then the Classic Adelaide Rally called

Again, normally TAG Heuer would not have been able to help, but by then Aaron had his head around the equipment. He found himself on a flight to South Australia showing event managers how it all worked. Word spread and Aaron was soon flat out with TAG Heuer Timing commitments. Fast forward a year or two and Aaron had successfully negotiated to become the Australian and New Zealand distributor of TAG Heuer Timing and their independent service provider.

Event Timing Pty Ltd was born and Aaron soon found himself timing races around the world.

The Tour Down Under is easy …. For the guys timing it

Actually let’s say rather that it’s easier than a lot of other sports, and that is largely because timing takes place ‘in the time of day’.

This means that because the race starts with all cyclists heading off at the same time (except of course for any Time Trial stages) then it’s easier to synchronise a number of clocks, versus having to allocate one timer to every competitor. Aaron and his team been a part of the TDU’s timing for the past six consecutive years.

Timing the Tour Down Under is a five-person job, and the team starts preparing five/six months out

In order to efficiently time a high calibre event like the TDU, it takes: 1 x Project Lead, who is the main liaison between the event organisers and the timing team
1 x Results Manager, who deals with the compilation and distribution of results. Aaron is fortunate enough to have Bruno Cordier in this role (Bruno is the Results Manager for Tour de France)
1 x Camera Technician, or line scan camera
1 x Transponder Technician, who specialises in capturing transponder data (by this we mean data from say a timing chip on a competitor)
1 x Tracker Technician, who tracks via GPS the race as a whole versus any single competitor (individual tracking is against UCI regulations)

On your marks, get set, go!

Before the race gets going, there is a huge amount of prep work done by the timing team. They need to establish or re-establish relationships with production crews to ensure everyone’s on the same page regarding data feeds that will eventually go out to the world’s media.

TDU takes them through the race route in detail, allowing them to identify KOMs, any sprint point locations as well as mobile connectivity. In elevated regional Australian areas in particular, this can be a challenge for which Aaron and his team must have a plan B.

They quality control all hardware and run transponder checks.

As the TDU approaches they will become more closely engaged with UCI representatives. One meeting in particular is mandatory for all teams to attend; this is where a final check of data integrity is undertaken, with Aaron and his colleagues working with each team to check competitors’ names are correct and in order. This is also the meeting that confirms the sequence of team cars during that first day of racing (GC determines this for every other day).

Because the TDU finishes in a different location and races different routes each day, the timers are required to bump in and out (set up/ pack up) each day.

Come race morning they’ll be out on site around 6am working alongside gantry operators and putting into place finish line cameras, transponder antennae and checking the start impulse (otherwise known as the start signal that will prompt timing to commence). The central hub is located in a caravan not far from the finish line and it’s from the caravan that race organisers will receive firstly provisional results (based on the transponder timing data) and then as soon as possible thereafter, official results (a mandatory UCI requirement which sees provisional data cross-checked with visual footage ).

Who’d have thought he was a show jumping man?

His children’s school also has the most precisely timed school fete fun run on record.

But it’s show jumping that’s turned out to be one of his favourite sports to cover. In the world of show jumping, it’s not just about the first to cross the line. There are challenges, techniques, and skills that must be displayed for points right the way through. It’s a noble sport and it’s won an unlikely fan in this self-confessed motor head.

It’s not just the pros who get timed

Aaron is a big supporter of grass roots sporting events, and he will often be found timing races run by volunteers, or not for profit events. You only need to do a mass ride to realise just how valuable his services are. What’s one of the first things we do once we’ve got off the bike from racing and had a bite to eat? Check our time (and everybody else’s).

Did you hear the one about the World’s Fastest Couch?

Yep – why time athletes exclusively when you can time a sofa?

Once upon a time a national marketing campaign called on people to ‘add a motor to it’. Little did the marketeers know that when it came to couches, someone had already thought about that, and they’d established a world record in the process. In a marketeer’s world a record is currency, and they didn’t waste any time recognising the potential value. Aaron’s services were quickly called for – they needed an official timer who could adhere to regulations so that the record-beating attempt was judged legitimate.

Let this footage do the talking…