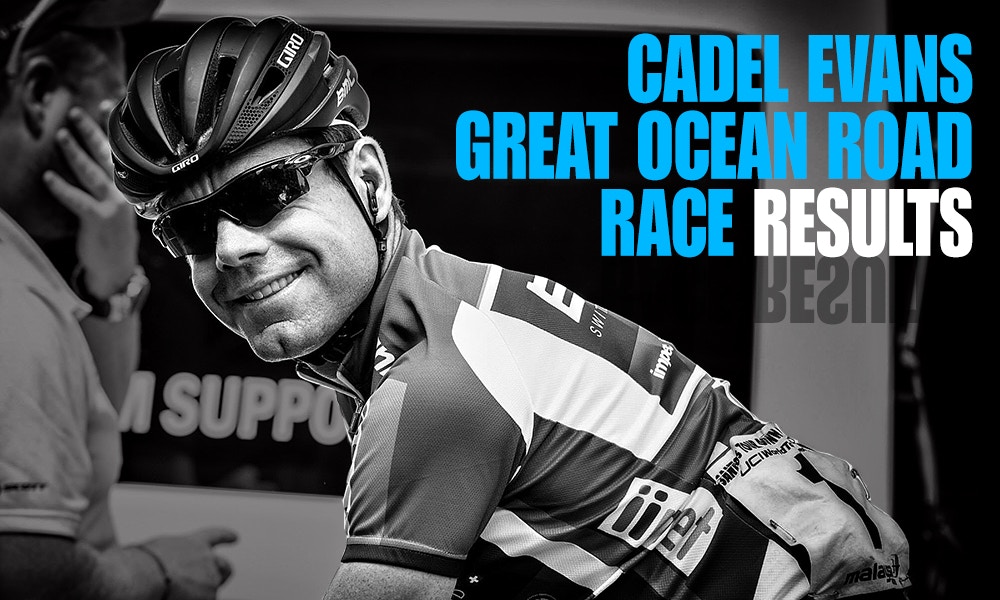 Cadel Evans’ last professional cycling race was tailor-made from him.

The weather conditions would prove to be exceptional tough, the course even tougher, and the racing as punishing as any other in the world.

Massive crowds came out to see the start of the race as the peloton rolled out of Geelong CBD and onto the picturesque Bellarine Surf Coast.

The Peloton was very attentive to start the race, closing down early breakaway attempts from Team Budget Forklifts. A small group of four riders began to finally move away as they travelled towards Barwon Heads. The breakaway made up of Laurent Didier of Trek Factory Racing, Marco Frapporti of Androni Giocattoli, Darcy Woolley of African Wildlife Safaris Cycling and Josh Taylor of Charter Mason Giant Team.

Upon reaching Barwon Heads the locals in the breakaway got amongst it approaching the first Medibank sprint. Taylor was in the prime position at the back of the group and clearly wanted to take the points. Woolley jumped early and hard but Taylor quickly found his wheel and with 100m remaining, popped out and easily had enough to cross for the first points of the day.

In-between the peloton and breakaway group was young Team Budget Forklift rider Brodie Talbot who was painfully trying to bridge across. After what must have seemed like an eternity fighting head and crosswinds solo for 16kms, Talbot managed to tack on the back of the leaders and despite clearly having to push himself into the red, his aim was achieved.

Back in the main group the deficit had grown to 4-mins 30secs, with - as expected - BMC Racing Team on the front. Such is the respect for Cadel Evans, teammate and former Olympic Gold Medal winner Sammy Sanchez, who had flown over from Spain specifically for this race, was on the front riding for Evans, keeping the breakaway at arms’ length.

The second Medibank Sprint played out very similar to the first, Woolley jumping early and pushing hard for the line, this time staying clear of Taylor; but they had let Frapporti get too much room whilst preparing for the sprint and he crossed in first place.

As the first climb of the day approached the race stabilised for everyone except Trek Factory Racing’s Laurent Didier, who suffered a bad fall when a seemingly innocuous trip back to the team car for supplies ended his race.

On the race’s first Subaru King of the Mountain Talbot got some reward for all the hard work he put in earlier in the day, taking maximum points along with the early lead in the competition. Again it was Woolley crossing in second, making it three from three second places finishes so far.

With 115km to go the breakaways advantage was 4-mins, but that was soon about to come crashing down.

As the peloton turned towards Geelong with 82km to go the winds shifted, now hitting the riders in the side and causing a major shake-up. Cannondale – Garmin attacked hard into the cross winds and caused the peloton to splinter into pieces. Such was the acceleration of the splinter group, the breakaway’s advantage was obliterated and this group quickly became the leaders on the road. The only man from the original breakaway to hang on was Woolley.

Cannondale – Garmin drove on with everything they had, increasing the advantage and in the early stages, the peloton had no answers.

Evans remained calm and despite Cannondale – Garmin’s best efforts the group came back together. Not content to let the race settle, Team Sky’s Peter Kennaugh launched off the front with a huge effort, riding like a man possessed.

He was slowly reeled in and his move countered by BMC Racing Team as Danilo Wyss decided to fight fire with fire, forcing the pace as the inclines around Geelong approached a crushing 20%.

The move only served to further antagonise Kennaugh, who - as the group came back together - again tried to break away. His efforts were rewarded with a small time gap, but with so many kms to go on this difficult course he was inevitably brought back to the main group.

All of this action, combined with the wet conditions led to lots of falls in the group; riders literally dropping at each corner on the first lap.

Maxime Bouet, Jack Bauer and Darren Lapthorne made up a select group that kicked away once the bunch reformed. Their first challenge was the savagely steep Chalambra climb, which peaks at 22% and offered points in the Subaru King of the Mountain classification. Etixx-Quick Step’s Bouet crested the hill first taking maximum points.

Thankfully for other riders this breakaway group brought some calm and allowed what was left of the peloton to settle ever so slightly.

A great sign of things to come for Australian Cycling saw Robert Power of the Jayco-AIS National U23 Team attack on the 20% slopes and bridge across to the breakaway group, which now had a 72-second advantage with 41km and 2 laps to go.

The second time up Chalambra saw the leading group of four became seven with Pat Shaw, Stef Clement and Calvin Watson working hard to come across and add some late race power to the breakaway. Bouet again took out the Subaru King of the Mountain points ensuring that at the end of the day he would be standing on the stage with a winning jersey.

At one stage the breakaway’s advantage seemed insurmountable but amazingly with 25km to go the group came back together thanks to some heavy lifting from BMC Racing Team.

The final lap began with three riders away, Ian Stannard, Danilo Wyss and Pieter Serry, closely followed by Orica-GreenEDGE’s Simon Clarke attempting to cross the gap. Only a select group of riders remained and it was still anyone’s race.

The final time up Chalambra and WHACK! Moreno Moser attacked followed by Clarke, Kennaugh and BMC’s Wyss, splitting the already fragile peloton. Evans added to his fighting legacy cresting the climb and having enough strength to work across to the front group, ensuring a grandstand finish.

With 6kms to go Moser attacked again, this time gapping the group and looking strong. BMC Racing Team and Team SKY brought the young Italian back with only 3km remaining in the inaugural Cadel Evans Great Ocean Road Race.

A brief lull in pace was quickly rectified by Kennaugh who drove the riders hard as another group quickly gaining ground looked to spring an upset.

Kennaugh’s increase in pace was enough to keep the second group at bay and took his entourage to within 400m of the line. At this point Wyss opened up the sprint and from there it was a drag race with all 9 riders remaining, scattered across the wide finishing chute. Belgian rider Gianni Meersman of Etixx – Quick Step had all the firepower with 200m to go, and surged to a history-making victory. Clarke crossed in second and Cannondale – Garmin’s Nathan Haas rounded out the podium.

Evans was at the back of the group leading into the sprint and with no wheel to follow, he didn’t have enough horsepower to take the win. Nevertheless it was a show of everything we love about the man; he launched fight back after fight back, gritting his teeth in tough conditions and never giving in.

This race promises to be one for the ages with huge crowds, tough racing and the prestige of the big European races.

Chapeau Cadel Evans, we will miss you, but never forget you!

Thanks to Kirsty Baxter for the great pic of Cadel!