Find a bike shop Blog
‹ back
Home
Blog
Features
Can I fit disc brakes to my road bike?

Can I fit disc brakes to my road bike? 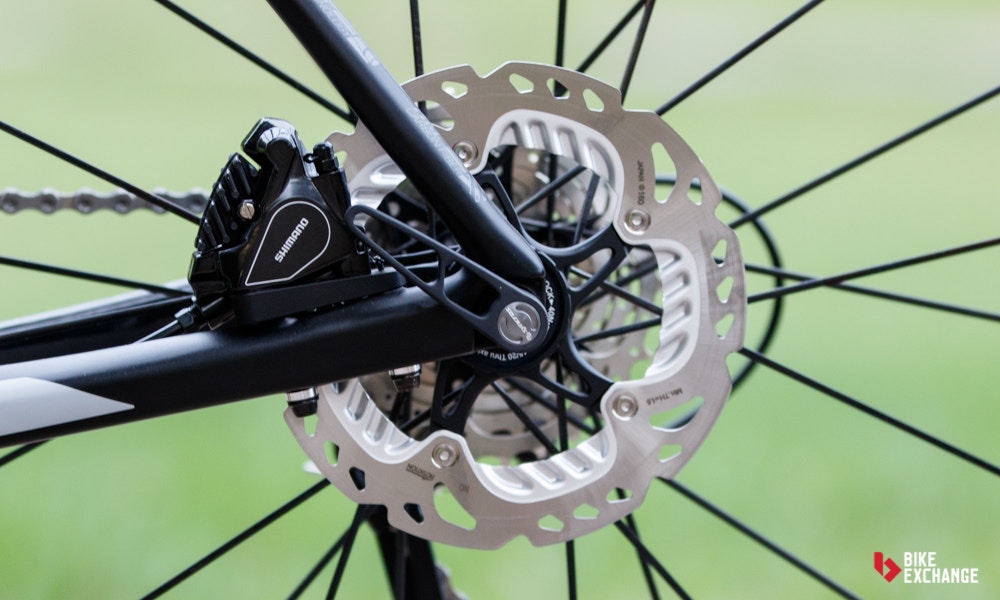 Despite currently being banned from racing, disc brakes on road bikes are fast taking over. The likes of Specialized and Giant have all but killed off rim brakes on their respective endurance road bikes for 2017 and the trend is only headed in one direction. With greatly improved braking control regardless of the conditions, disc brakes offer real safety benefits. They also offer greatly improved durability, lower maintenance and greatly open up bike design for what typically leads to a more comfortable ride quality.

One question we’re commonly asked is if you can fit disc brakes to a road bike that currently has rim brakes? The short answer is a simple no, but stick with us and we’ll explain why. A traditional road rim brake uses the rim as its 'rotor'.

Whereas a road bike rim brake traditionally attaches to a hole in the frame or fork, and then uses the wheels circumference as its braking surface, disc brakes are a little more complicated.

Placed at the centre of the wheel, disc brakes earn their name from the disc rotor that is attached to the hub of the bicycle wheel. This rotor is what the brake pads clamp onto, creating friction and slowing you down. Typically 140 or 160mm in diameter and just a few millimetres wide, this disc rotor sees some tremendous force and so needs to be attached securely to the hub. This is the first key difference, disc-brake road wheels feature hubs with a disc brake mounting point designed to handle the forces. Likewise, the spokes attached are typically in higher numbers and are designed to oppose the rotational forces.

The disc rotors themselves are available in two common mounting standards – six bolt and centerlock. The Six bolt standard simply uses six small bolts in a circular orientation to hold the rotor. Centerlock, a Shimano invention, uses a splined interface and a lockring for the rotor, this system is easier to work with but does require either a Shimano cassette tool or bottom bracket tool to operate.

A place for the caliper

With the disc rotor down at the wheel’s centre, a brake caliper needs to be placed centrally too. Disc brake road bikes feature specific mounting points near the front and rear wheel dropouts. These are always found on the non-drive side of the bike (left side). There are two common disc caliper mounting standards on modern disc road bikes - Post Mount and Flat Mount. Post Mount is a modern design borrowed from mountain bikes. The ‘Posts’ are designed into the frame and fork and are threaded to accept the caliber bolts. From here, a caliber is placed on top and bolted in place. Such a design typically ensures the caliber runs parallel to the disc rotor, but side-side adjustments can be made before tightening the caliber bolts.

Quickly taking over after Shimano introduced it in 2015, Flat Mount was designed specially for road bikes. Flat mount offers a far cleaner, lower profile interface that works better in the tighter confines and with the less torturous braking demands (compared to mountain bikes) of road frames. Flat mount works in a near opposite fashion to Post Mount, with the bolts running through holes in the frame (or adaptor plate) and then threaded into the caliper. It's possible to adapt a Flat Mount frame to accept both types of calipers, but it's not possible to adapt a Post Mount frame to accept a flat mount caliper.

If the place for the caliper and the different wheels weren’t enough, the wheel axle standards commonly differ with the introduction of disc brakes too. For rim brakes, the standard quick release remains the king, with the industry long set on 100mm width front spacing, and a 130mm width rear hub at back (the width between the insides of both dropouts). Look to a disc brake road bike and if the quick release remains, then it’ll most likely be with a 100mm front and 135mm rear hub spacing. Thru-axles get their name from running through. To remove the wheel, one must unscrew the axle and pull it out.

More likely though, the disc road bikes you’re seeing will feature thru-axles which aid in more secure wheel hold and improved stiffness. Like disc brakes, thru-axles are a common sight on mountain bikes and are well proven. Here, disc brake road bikes originally borrowed exact standards from mountain biking with 135x12 (12mm diameter thru-axle) and 142x12mm being the norm out back and a 100x15mm (15mm thru-axle diameter) hub in front. More recently, and with the introduction of the road-specific Flat Mount standard, road bikes have got their own thru-axle standard. This is 142x12mm rear, and 100x12mm front - something that is lighter and more compact than what mountain bikes offer. A mechanical disc brake clearly has a cable connecting it to the lever. Hydraulic systems, such as the one pictured in the lead photo at the top of the page have a sealed hose to house the fluid.

The majority of rim brakes on the market are mechanical in nature, using a braided cable to attach the lever to the caliper. While such a system is regularly used for disc brakes too, suitably called ‘mechanical disc brakes’, the trend is toward full hydraulic systems. These full hydraulic disc brakes replace the braided mechanical cable with a fully sealed hydraulic hose that sees fluid pressure transferred from the lever to the caliper - it’s a miniature version of the technology commonly found on modern motor bikes and cars.

With a hydraulic system, the shift and brake lever needs to be designed with an internal bladder system. It’s something that has to be bought as a unit, and cannot be added on down the track to mechanical systems.

So in the end, there are many factors that make a disc brake road bike different to one with rim brakes. While it’s likely you can’t adapt your current bike to disc brakes, it does make it another great excuse to get that new bike.