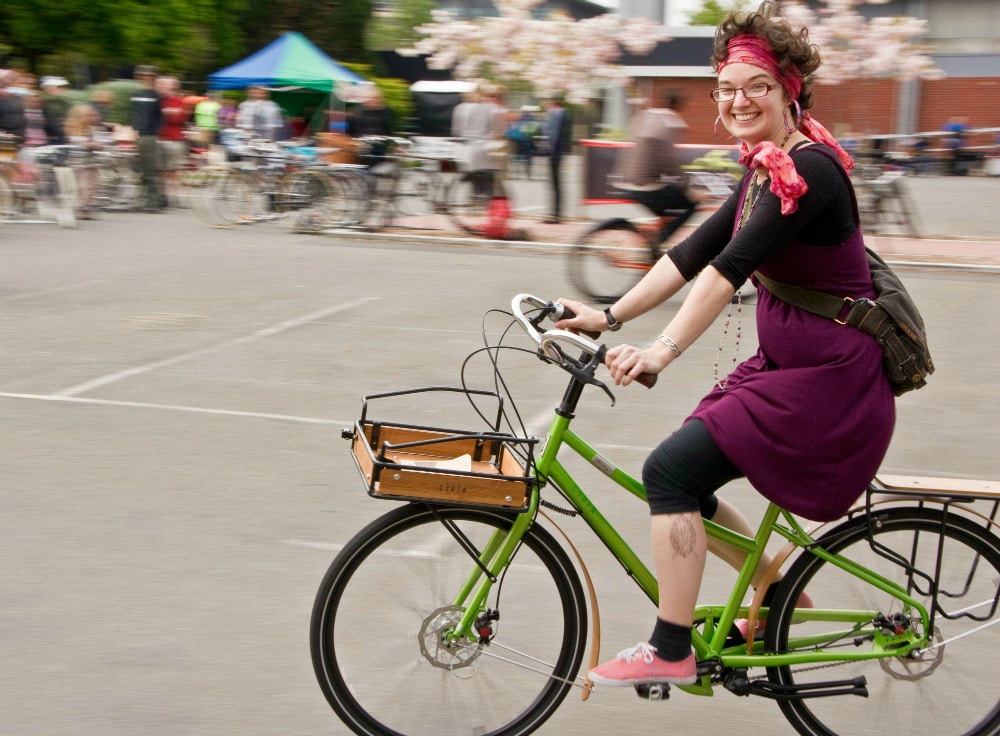 The idea was hatched at a Go By Bike event.

A cluster of women present looked around to realise the majority of attendees was dressed like Lycra warriors. Where were the riders who didn’t look like they were about to enter a race? Where were the people who were just taking it easy on the bike? They seemed few and far between, and so an idea (which would eventually become Frocks on Bikes) gathered momentum.

The kernel was simple; to embrace bike riding at a simpler but equally enjoyable level to those more seriously dressed; to advocate riders who were more fastidious about fashion than they were fast wheels. A group was formed in 2008 and launched with much fanfare at a 350.org event. It seemed a fitting association – bike riding was not only a pleasure; a means of moving around easily; an inexpensive mode of transport; a facilitator of good health; it was also environmentally-friendly.

By the time the launch had concluded, Frocks on Bikes was 200-members strong.

Since then the movement has expanded and cluster groups exist in Auckland, Wellington and Christchurch. Gatherings occur somewhat randomly and are weather dependent. Rides are never arduous or overly exertive; they’re pleasurable meanderings that might take participants to, for example, a fresh produce market followed by a sit-down at a local café. Sometimes there are themed dress codes – perhaps a colour one month, or ‘your most gorgeous dress’ the next. Although the group is predominantly female, some men do attend. In Wellington and Auckland the male riders have been known to have a bit of fun wearing the odd tutu, but in Christchurch there seems a bit more sartorial style amongst the men (is that an inter-city challenge…?!). There are now some 350 members. This figure continues to grow yet might experience quite a swell come Sunday 21st June, when the Christchurch chapter holds its annual Winter Solstice ride.

Riders will converge on Hagley Park and head off together at around 17.30, possibly a bit later given the numbers anticipated. Already there is chatter amongst those attending as to how they will be frocking up. The theme will be ‘lights’ and everyone is expected to be illuminated in some way – certain riders have been talking about sewing lights into their outfits for a particularly creative interpretation.

Whereas in the past the Winter Solstice ride is usually only one lap of the park, this year event organisers are planning two for those who don’t want the fun to finish. And instead of concluding with a coffee and something sweet, food trucks will be arriving on-site, three bars are preparing to cater for riders and numerous restaurants have been booked in anticipation. It’s gearing up to be the perfect way to spend a cold winter’s Sunday. A bike, a frock (and hopefully some warmer wardrobe additions), some lights, a cheeky beverage and plenty of socialising. It’s our kind of riding fun.

For more Everything Bike, jump to our blog!