Find a bike shop Blog
‹ back
Home
Blog
News
This Year's Giro - What Can We Expect?

This Year's Giro - What Can We Expect? 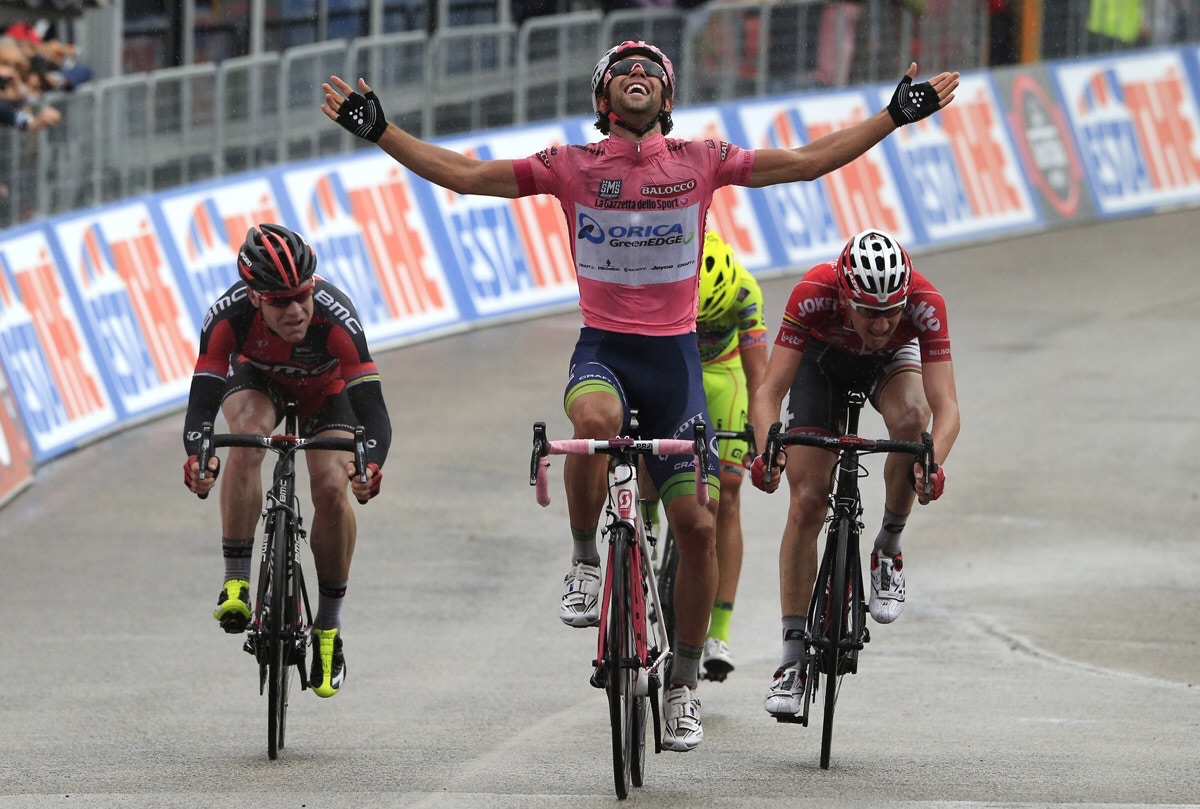 Remember what I said about the Spring Classics? The best races of the year. I lied. Kinda.

Well not really. Only take what is so appealing about the Classics: wildly variable weather, unpredictable racing, testing parcours and (in Giro’s past) absurdly long distances. Add the obligatory Italian drama – take your pick from Pantani, snow storms, riders threatening to quit the race, etc – and you have a race that is like the Classics in nearly every sense. And we get three whole weeks of it!

Now instead of mundanely plodding through a preview of each stage, I’m going to cut right to the chase and give you a rundown of all you need to know and do to enjoy the 2015 Giro d’Italia.

Firstly, start with watching the official promotion YouTube vids and you get an idea.

The passion. The actual blood, sweat and tears. My father is Italian, so of course I’m biased. And not saying the Tour de France and Vuelta Espana are without a rich history and sentiment. Only the raw emotion the Giro is able to evoke out of the the tifosi (fans) and the competitors is second to no other Grand Tour. Never will the ratio of ‘grown men crying’ to ‘stages raced’ be higher than the tour of Italy. Not because Italian boys are more inclined to have a blub, more that there are plenty whose career aspirations have Giro glory above anything else in world cycling.

The culture. Eating Italian food is easy. Get in to the swing of the Giro and actually make some gnocchi. Don’t have milk in your coffee after midday. Move your arms wildly whenever you speak (loudly). And track down some panettone (or “delicious wog bread” when my mates ask me to bring some) to snack on during the race. I’d add ‘build a woodfire oven’ but chances are you’re a cyclist. And cyclist arms aren’t built for carrying bricks.

The history. If you know cycling then you know Marco Pantani. His final Giro d’Italia win came atop of the Madonno di Campiglio in 1999, where the next day he was found to have evidence of EPO use and forced out of the race whilst holding the leader’s Maglia Rosa jersey. Marco never won another stage of the Giro and tragically died in 2004. This is the first time since 1999 that the Giro has returned to the Madonna. Expect it to be even more emotionally charged. And for an even better sense of what Pantani meant to cycling, the book The Death of Marco Pantani is a ‘must-read’.

Now, for the other important points.

Starting with the jerseys:

• Maglia rosa: the coveted pink jersey. That colour because (like the Tour de France) the Giro was created by a newspaper. La Gazetta Dello Sport’s pages are pink, naturally the leader of the race was going to wear the same. Italian men being so fond of pink now makes all the more sense.

• Maglia rossa: the red jersey. Depending on how much the rules have been tinkered will depend on who wins this. Presently a jersey for the sprinters, riders like Cadel Evans and Michele Scarponi have also taken out the Maglia rossa. 2015 it will again favour the sprinters. But it’s the Giro, so you never can tell.

• Maglia azzurra: the blue jersey. Previous the Maglia verde won by Matthew Lloyd in 2010, the mountains classification jersey changed colour to better represent the naming right sponsor of this classification. Unlike the maglia rossa, no surprises with this winner. Discount any rider with a BMI over 20.

• Maglia bianca: the white jersey. Awarded to the leader of the ‘youth’ (because 25 years or younger still classifies you as a kid) classification, it’s re-introduction in 2006 has seen it resting on the shoulders of two of this year’s maglia rosa favourites Richie Porte and Rigoberto Uran.

Two weeks ago Richie Porte popped a picture up on Instagram of him in the maglia rosa in 2010. Accompanying it was the hash tag #whoateallthepies and while it might seem harsh, there’s no doubting Richie is now both ripped and in super form. Questions still remain around his ability to string together three weeks of consistent riding. But the team time trial and 59.2km individual TT are perfect for the Tasmanian. If ever there was a reasons for Australians to watch the race for the first time, the man from the Apple Isle is it.

Challenging will be 2008 Giro d’Italia winner Alberto Contador. No phone call to a beach a week before the race (reportedly that was where Bertie was found when his team called to plead for him to race the 2008 Giro) instead Bertie finds himself in the awkward position to having agreed to Oleg Tinkov’s ‘brilliant’ plan of winning the first Giro-Tour de France double since Pantani in 1998. You know those moments at work, when you agree with what your boss says but secretly pray his was only kidding, this could have been one of those. Only Oleg wasn’t joking around. So it’s fair to say Alberto is coming in a little underdone, with the hopes that it’ll both be enough and not leave him too cooked for the Tour in July. Tough gig.

Rigoberto Uran returns to try and again take the title that a rampaging Nairo Quintana coolly snatched away last year. Uran suffered both over the Stelvio in the controversial stage 16 and with the amount of support offered by his team. Rides a solid time trial, however Etixx need to ensure they send a supporting cast that will both ride a strong team time trial in stage 1 and be there for the leader over the course of three weeks.

No uphill time trial and recent illness don’t bode well for Fabio Aru. Word is he’s “spent time in the wind tunnel” over the off-season. Which when your team’s bike sponsor is Specialized, that line should be taken at more than lip service. The issue is he’s either up against a winner of all three Grand Tours (Alberto), a national time trial champion (Richie) and a rider also sponsored by Specialized (Rigoberto). All this is great news for us spectators, as attacks in the mountains will be a certainty. The Maglia rosa will be out of reach, but another lower podium step is certainly possible.

‘Doctor’ (on account of being quite the scholar) Domenico Pozzovivo, 2012 Giro d’Italia winner Ryder Hesjedal, pint sized 2014 maglia azzurra winner Julian Arredondo and Orica-GreenEdge’s Esteban Chavez are all riders who you can expect to animate the race. But a bit like Western Bulldogs, they’re all just a little bit short of truly threatening the top tier. Not that it means the top contenders will give them any leash. Too strong to not account for, not quite strong enough to challenge the overall.

I’ve almost given up trying to predict what will happen. Nights where you go to bed, expecting a regular sprint finish, you wake to find the general classification has been tipped on its head. Stage 11 in 2010: a prime example. Intermediate stage that saw nearly fifty riders in the breakaway. It was what led to Richie wearing the Maglia rosa and is a scene unlike anything you would see in any other Grand Tour. What I can promise is that Orica-GreenEdge want the TTT win in stage 1. They’ve named a squad with both win and replicating the success of 2014 in mind.

The whole first week is additionally quite a bit tougher than you might expect from a Grand Tour. Only I’m not being cliché when I say that “anything could happen”. 2011 was so ridiculously hard that it nullified the racing. Last year’s Cima Coppi stage over the Stelvio went from ‘hard’ to ‘nearly impossible’ with the freak addition of a snow blizzard. This Giro appears to have the right balance of a very challenging course, enough strong riders and teams to make the Maglia rosa ‘fight for pink’ entertaining and (odd for so early in the season) enough riders looking to salvage what has been a disastrous 2015. Simon Gerrans returns to the Giro for the first time in years, as does Tom Boonen, Philippe Gilbert and Andre Greipel. The former two have had an injury marred opening to the year – the latter employing a different racing schedule to normal. All add to the splendour that is Giro d’Italia.

Watch all the stages if you can, you’ll soon see what I mean.

Big thanks to Graham Watson for his sensational pic from last year's Giro.