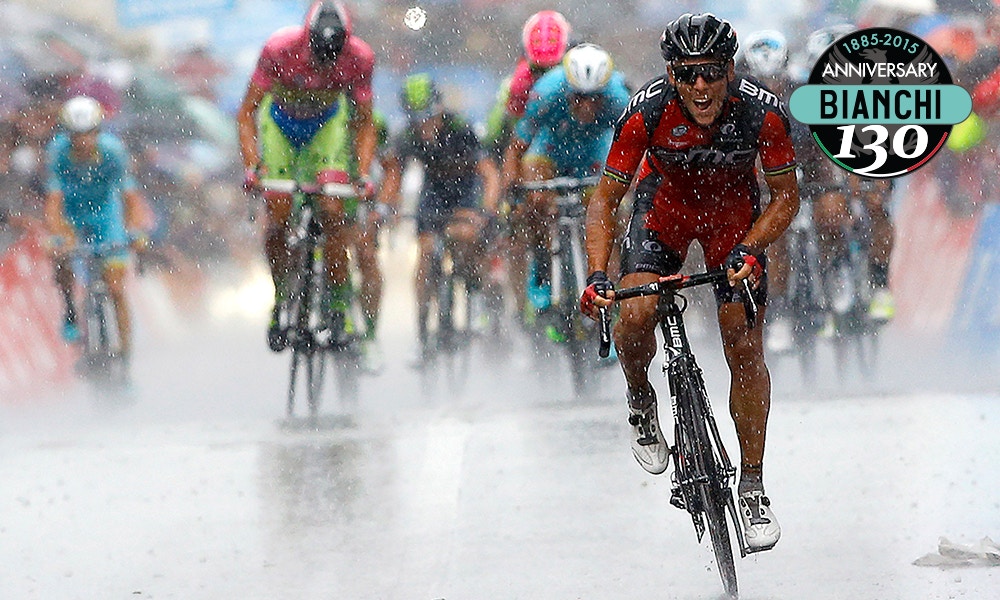 The rules are different at a grand tour and the unexpected always happens.

Stage 12, a transition stage, promised nothing. Yet delivered rain, drama and a display of power few riders can produce. The peloton began the day more than motivated averaging around 50km/h for the first 2 hours.

The high pace made it difficult for the break to gain any real time over the peloton. Patrick Gretsch (AG2R-La Mondiale), Davide Appollonio (Androni-Giocattoli), Enrico Barbin (Bariani-CSF), Kenny Elissonde (FDJ) and Nick van der Lijke (LottoNL-Jumbo) only managed to get 2 minutes clear.

With 60km left to race the weather conditions deteriorated, the rain came down and the finish would be a very wet one.

Orica GreenEDGE had kept the pace high with hopes of delivering Simon Gerrans to the line. An unfortunate spill on a slippery left hander took Simon out of contention.

A 10 strong group made it clear containing all the main contenders. This group was soon joined by a bigger group who would ultimately battle it out for the stage win.

Two riders, Androni’s Franco Pellizotti & Tanel Kangert of Astana held 20 seconds going into finishing climb of Monte Berico. Kangert looked the fresher of the two and rode away from Pellizotti in hope of a stage victory. The motivated pack behind caught him with 400m to go, paving the way for Philippe Gilbert to unleash one of his trademark uphill surges to clear out from remaining group. Gilbert opened up a huge margin in the final few hundred metres, Contador crossing the line in second three seconds back.

Gilbert’s effort marked the first victory for BMC at this year’s Giro.

Alberto's second place on the stage earning him a 6 second bonus.

Stage 13 shapes up as one for the sprinters with a pancake flat profile and distance of only 147km.

Thanks to Graham Watson for his image.