Gilbert Takes His Second Stage Of The Giro 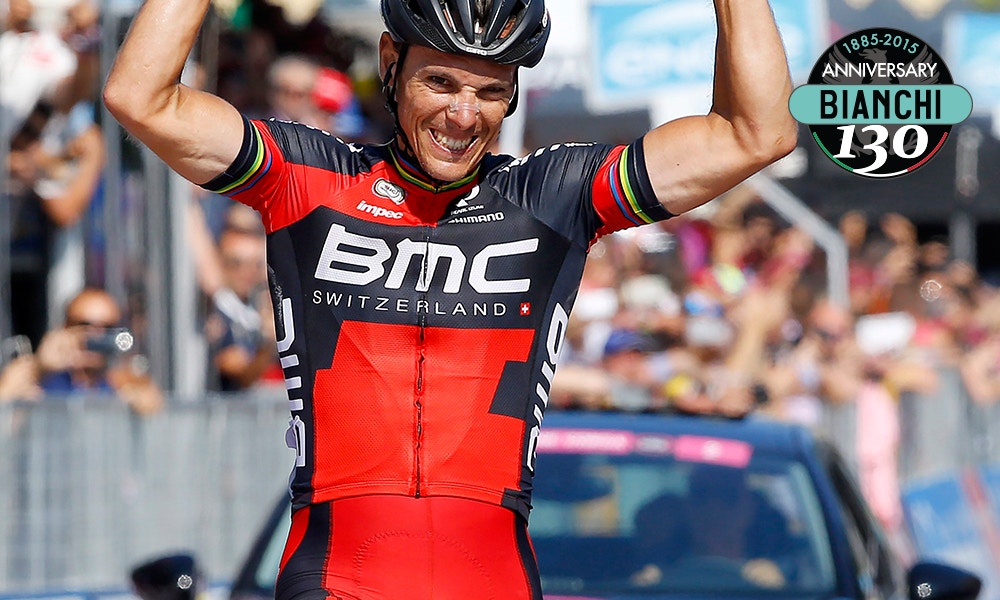 Stage 18 looked to be a day for the breakaway with only one major climb and some very tired legs in the peloton.

A group of 12 riders formed early in the stage and was allowed to extend their gap out to over 13 minutes. The peloton under no pressure and happy to see the breakaway ride down the road.

They remained together until the category one Monte Ologno climb where things started to breakup. A sub group of four riders Amael Moinard of BMC, David De la Cruz of Ettix - Quick Step, Manuel Bongiorno of Bardiani CSF and Kanstantsin Siutsou of Team Sky gained an advantage of over one minute and seemed destined to take the victory.

Philippe Gilbert of BMC, who is on great form at the Giro, rode his own tempo and rejoined the leading four riders. BMC planned the decisive move of the day to perfection. Moinard had soften up his fellow breakaway riders just moments before Gilbert got back onto the group.

Upon catching the leading riders, Gilbert launched an attack immediately and no one in the group had any answers. Gilbert went on to show off his descending skills, staying away and soloing for the stage victory. All the while Moinard playing police officer and covering any moves in support of his team mate.

Contador then attacked at the bottom of the climb, quickly distancing himself and time trialling up the climb. The only rider that could follow him was Ryder Hesjedal of Cannondale-Garmin, who after initially being dropped had enough strength to work his way back.

Not that he needed it, but Contador again opened up big time gaps on his rivals, finishing over a minute ahead and extending his advantage to over five minutes on Landa and six minutes on Fabio Aru.

There's no rest for the peloton on Stage 19. A brutally hard mountain stage awaits, finishing with three category one climbs. The only question is whether Contador will put Astana to the sword or be content with the damage he has already done.