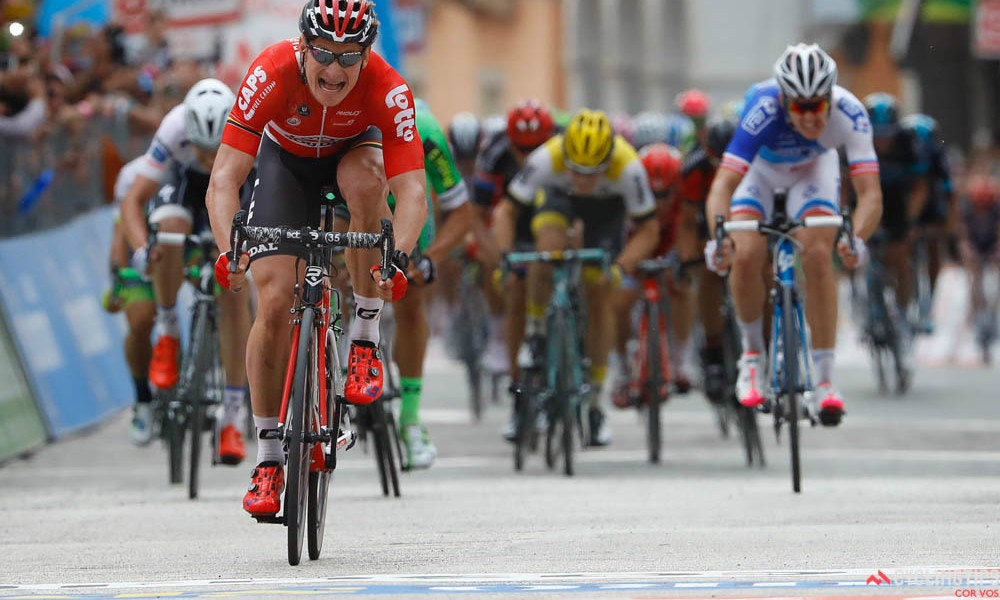 It’s a day of double festivities for the Lotto Soudal team at the Giro d’Italia, with Andre Greipel notching up the first stage win of the race for the team and Adam Hansen, who helped pave the way for the victory, celebrating his birthday.

Greipel showed his sprinting power last year with four stages in the Tour de France, but hadn’t really clicked thus far in the Giro d’Italia. Fourth on stage three had been as close as he had got, but things finally came right on stage five to Benevento.

Greipel’s team worked hard to put him into position and while the squad ran out of men inside the final two kilometres, causing him to slip back, he chose his moment perfectly to jump and immediately got a big gap.

Double stage winner Marcel Kittel was another birthday celebrant, but lost out due to the undulating parcours and was dropped.

“I think it started with chasing the breaking away down,” said Greipel, describing the route to his success. “Jelle Vanendert kept riding with Giant-Alpecin. The other teams didn’t help. We had to gamble a little bit. At the end we used another two riders, Tim Wellens and Lars Bak, to chase the break down.

“The other riders kept me up front. It was really important to do that with all the corners and the fast downhills. Jurgen Roelandts did an amazing job inside the final five kilometres to keep me there.”

He has lost out on races this year due to being crowded out of it and avoiding that was foremost on his mind. “For the sprint, I thought to myself ‘please don’t get boxed in.’ Everybody slowed down about 400 meters to go. I just thought, okay, if I see a gap, I just go through. I did that, giving everything I had in my legs.”

Greipel’s victory was a lot to do with timing, but also strength. “I had good legs today. Even if the team was a really big part of it, I think I did a good sprint today.”

Overnight leader Tom Dumoulin (Giant-Alpecin) finished in the same bunch and maintained his grip on the Maglia Rosa. Jungels moved four seconds closer due to bonues, but is still 16 seconds back.

“Today went exactly like we expected,” said Dumoulin. “It was a difficult day, really hard, the whole day up and down. But it was quite easy for our team to control. The final was really…I know what they mean by sprinting in Italy. So chaotic, really dangerous. I actually suffered in the final, but everybody did.”

Thursday’s stage features an uphill finish and is one where the general classification could change. However Dumoulin feels good about his changes.

“Normally the finish it is not too hard. With the way I am feeling now, I am not expecting to lose too much time, if I lose any.”

One who will definitely concede more ground is former race leader Marcel Kittel. He isn’t worried about that, though, but is instead more concerned with keeping the red jersey of sprint leader. He believes there will be more opportunity soon.

“I don’t think today was the biggest and best chance for me,” he accepted. “We had 800 altitude metres more than yesterday’s stage. I struggled a bit. Andre was super strong and he deserves to win.

“From now we are looking forward to the next days. I hope stage seven will be a chance.”

Extending 233 kilometres between Praia a Mare and Benevento, the fifth stage of this year’s Giro d’Italia was the second longest of the race. It was also a lumpy, draining one, despite having just one official climb. This was the category three Fortino, which came 35 kilometres after the start.

The early part of the stage was a gradual drag to the summit of the aforementioned Fortino ascent. On paper this looked like an opportunity for an early attack, but pace setting by the Nippo-Vini Fantini team for mountains leader Damiano Cunego dissuaded anyone from jumping away prior to the Italian taking top points.

Once over the summit, and with 34 kilometres covered, four riders clipped away. These were BMC Racing Team’s Daniel Oss, Amets Txurruka (Orica-GreenEdge), Pavel Brutt (Tinkoff) and Alexander Foliforov (Gazprom-Rusvelo).

Their lead grew to four and a half minutes, but with Txurruka five minutes 25 seconds behind race leader Tom Dumoulin, there was no immediate need for his team to chase. In fact, the Giant-Alpecin squad was happy to give the move some space and it built a lead of almost seven minutes.

This was as big as the advantage grew and the pendulum soon swung the other way. The break’s momentum was further affected when Oss crashed on a descent inside the final 110 kilometres, although he was fortunately able to get back to the other three and to resume his contribution.

With 78 kilometres remaining the move was four minutes 15 seconds ahead of the Giant-Alpecin led peloton. That main bunch was minus one of the key sprinters, with Jakub Mareczko (Wilier – Southeast) abandoning. The 22 year old had scooped two stages in the recent Presidential Tour of Turkey, but had not been a factor in this year’s sprints.

While he hoped that would change, illness put paid to his participation.

The break continued to plug away at the front but as time passed, it became more and more clear that their mission was a difficult one. Inside the final 40 kilometres the gap was whittled down to a minute and a half, and the Lotto Soudal, Trek Segafredo and IAM Cycling teams further reduced that.

With less than 20 kilometres to go Zilioli, Australian champion Jack Bobridge (Trek-Segafredo) and Alberto Timmer (Giant-Alpecin) hit the deck. Rafal Majka (Tinkoff) was another who was delayed, although his complication was due to a mechanical issue. He was able to rejoin, while the three fallers were also able to get going again but would lose almost nine minutes.

The break was finally caught just before the final finishing lap, 6.5 kilometres from the line. LottoNL-Jumbo were driving the pace, then Lotto Soudal took over for Andre Greipel. Marcel Kittel had been dropped and his absence opened things up for the other sprinters.

Greipel was feeling good but the earlier work by his team meant that he had just one team-mate working for him inside the final three kilometres. He was sitting second in line but was then passed by the Lampre-Merida and FDJ trains, losing ground before the sprint.

However he didn’t panic and timed things perfectly, launching at the moment of a slight lull and immediately opening a gap.

The former junior national hill climb champion then increased his advantage all the way to the line, using his power to chew up the metres on the cobbled uphill drag to the line.