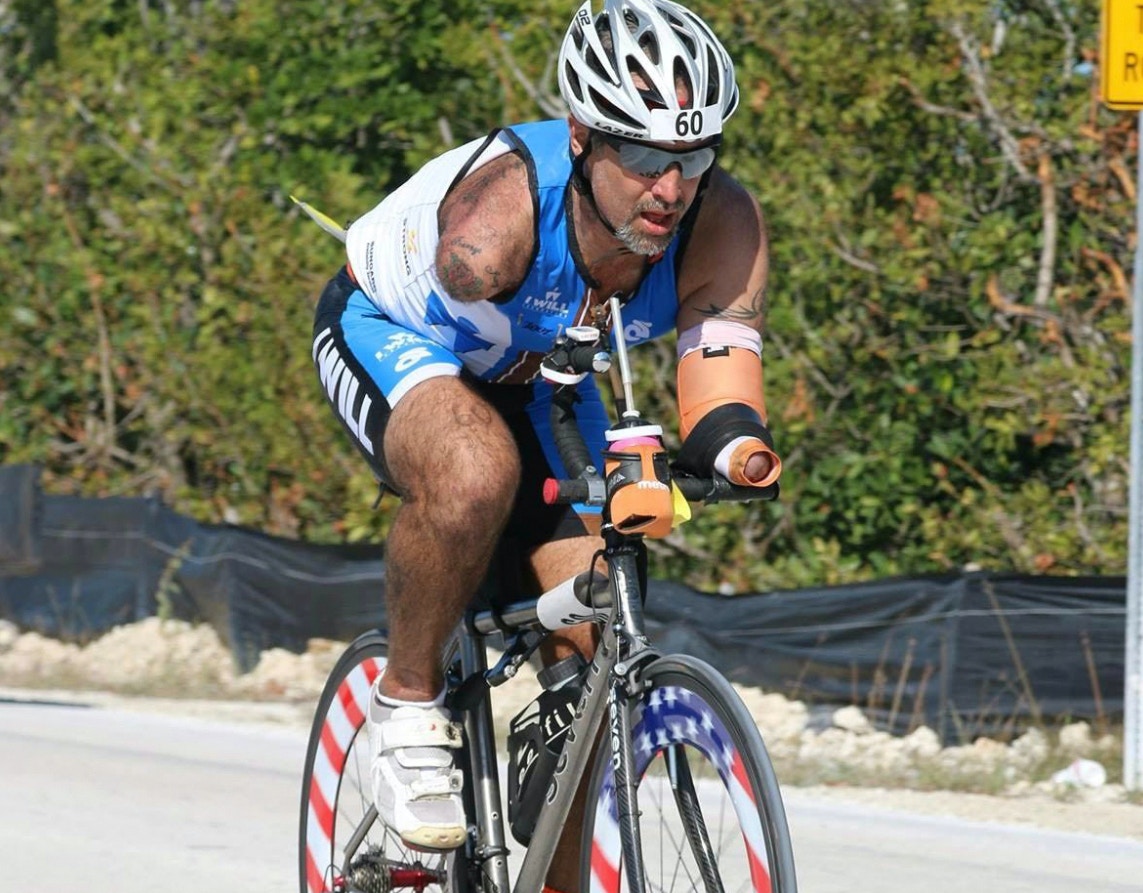 Hector Picard almost lost his life in a work related accident over 20 years ago.

The accident was so severe he became a bi-lateral amputee and had to find a way to be active and live life again.

Hector has overcome many obstacles since his accident. He is a source of inspiration for others, competing in triathlons, fun runs and founding dontstopliving.org, which was created as a resource and support system to help people get through challenges in their lives. He’s also ridden across the USA… twice!

Hector does a lot of public speaking, reaching people with the message that no adversity is too great to overcome.

He is also famous for changing his tyre with no hands. A Youtube clip which has gone viral proves there is nothing Hector can’t overcome.

We asked Hector a few questions about overcoming obstacles and how he has continued to live an active life after his accident. How did this happen to you?

In 1992 I was working as an apprentice electrician in South Florida when I made contact with the low side of a substation transformer receiving a double jolt of 13,000 volts resulting in the loss of my entire right arm and half my left in addition to second and third degree burns to over 40% of my body.

What was the hardest single thing to overcome after your accident?

To learn to be independent as well as be a father to my daughter and husband to my wife.

Get more great reads about amazing people and their bikes here

How important was your support network in your recovery?

It was extremely important. My support system included my wife, parents, brothers, friends and daughter. The support that I received from caregivers was vital.

What is you aim through dontstopliving?

I use it as a platform to inspire those who visit it.

Were you into triathlons before your accident?

I played team sports growing up and never considered swimming, cycling or running. Wish that I had.

What drives you to compete and finish these events?

I love the challenge of doing something that most would think impossible for someone like me. I was competitive before my accident and losing my arms didn't change that.

Talk us through the things you have to do to complete the event - i.e. modifications on the bike, transitions etc...

I taught myself how to swim using my legs and on my back. I use a frog kick type movement.

I modified my first bikes moving the brakes to the frame and using my knee to apply them. I added a flexible cylinder device on the handlebars and would slip my stump through to steer. I used hands-free hydration and would hit the gears with my foot. Later I received a bike with electronic shifting from The I WILL Foundation and Signature Cycles. Running isn't my favorite of the three but I work hard at trying to improve.

Read about the most common sports nutrition myths

You're famous for the Youtube clip of you changing a tyre - what made you think of filming that and sharing it?

After cycling across the country twice, first in 2012 (Fort Lauderdale to NYC) and in 2013 (Miami to Spokane, WA) I had to learn how to do it by myself. When I told people, they didn't believe that I could do it. So I wanted to show them, and all those who say that they can't.

Do you get a lot of feedback about it?

The response worldwide has been incredible. I estimate anywhere in excess of 30 million views on Facebook and other outlets. I get friend requests from all over the world. A big part of what you do is about overcoming obstacles, what is some advice you would give to people to overcome obstacles in their lives?

Don't let those obstacles stop you from reaching your goals or doing those things that make you happy.

What is the one thing that keeps you going through the tough times?

I always keep thinking that I don't have time for feeling sorry for myself. I want to be the best son, husband, father and grandfather that I can be. I want to be an inspiration and role model for my kids, all kids and especially those with disabilities.

Discover the rules of cycling with the Velominati