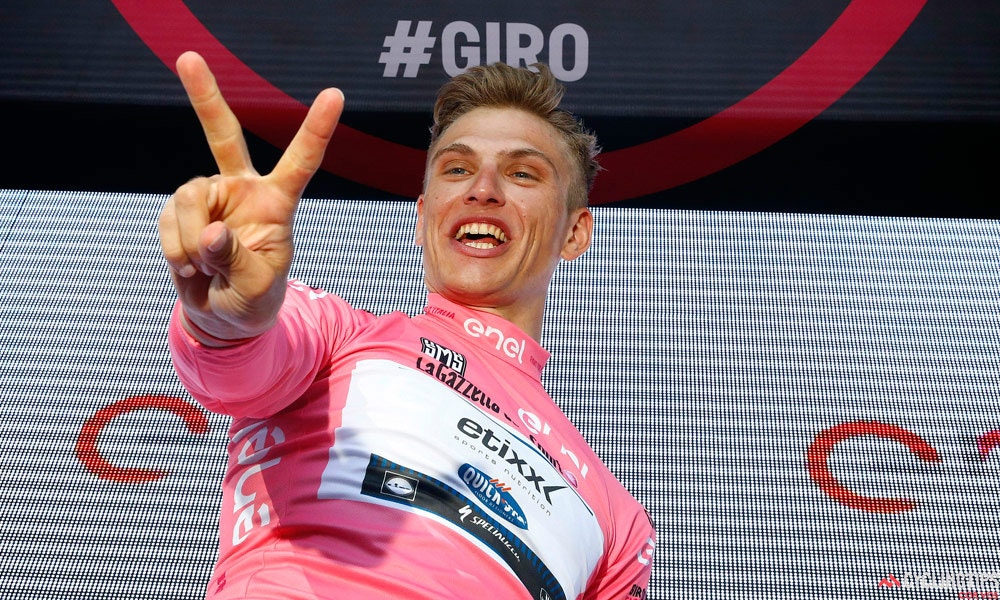 Just as he did two years ago in Ireland, Marcel Kittel took a back-to-back stage win in the Giro d’Italia, nabbing his second successive victory with a dominant sprint.

The Etixx-QuickStep rider fortified his lead in the sprint classification but, more importantly, took over the pink jersey of race leader with his fast finish in to Arnhem.

Elia Viviani (Sky) was locked onto his back wheel when Kittel accelerated but had no answer at all, finishing two lengths back. Giacomo Nizzolo (Trek-Segafredo) was third and Andre Greipel (Lotto Soudal) was fourth.

Kittel’s success is his tenth of the season and sees him take over in pink from former team-mate Tom Dumoulin (Giant-Alpecin). He is leading the race for the first time in his career. It is also the first time in ten years that a German rider is at the head of the general classification

Kittel will start tomorrow with a nine second advantage over Dumoulin. Andrey Amador is now third, 15 seconds back.

“I am super, super happy to win my fourth stage in the Giro, and also to have this leader’s jersey,” the German said afterwards, beaming with satisfaction. “I can say now I have worn the leader jersey in the Tour and also in the Giro d’Italia.

“It is something very unique and something I am very proud of.”

Although the stage was flat, he said it was not an easy one. “Today was a super tough day. There was a lot of wind, and teams were very nervous.

“We had to go full gas to get the breakaway. My boys did an amazing job. Matteo [Trentin] and Fabio [Sabatini] are super good pilots and they did things at the right moment to bring me to the front.

“When they brought me to the right position, I was very confident. This is my second time winning two stages in a row at the Giro d’Italia but in Ireland in 2014 I didn’t get to wear the pink jersey. This time I’ll have it after the rest day and I want to finally win a stage in Italy as well.”

Dumoulin said prior to the stage that he didn’t expect to remain in the race lead. However his team-mate Tobias Ludvigsson said that Giant-Alpecin aren’t finished in relation to that classification.

“The main focus is still with Tom. Hopefully we can take the pink back.”

Ludvigsson continues in the white jersey of best young rider and noted that it was a long time ago that a Norwegian was in a classification jersey.

“I think it is seven years ago when it was Thomas Lovkvist dressed in pink,” he said. “For us it is really big and for me personally also. I hope I can keep it a bit longer.”

The race now heads to Italy, giving the riders a rest day on Monday. Kittel has never taken a Giro stage on home soil and now sets that as his new target.

The third stage of the race was another predicted to be for the sprinters, and covered 190 kilometres of flat ground between Nijmegen and Arnhem. It was run off in bright sunshine, adding to the festive Giro atmosphere in the Netherlands.

Tom Dumoulin (Giant-Alpecin) rode out in the pink jersey of race leader, while stage two winner Marcel Kittel (Etixx-QuickStep), his former team-mate, was in the red colours of sprint classification leader. The other two jerseys were the blue jersey of King of the Mountains, worn by Omar Fraile (Dimension Data) and the white best young rider tunic, as sported by Tobias Ludvigsson (Giant-Alpecin).

Very early on Maarten Tjallingii (LottoNL-Jumbo) attacked and got clear with Giacomo Berlato (Nippo-Vini Fantini), who had been away with him on stage two. Also present were Johann Van Zyl (Dimension Data) and Julen Amezqueta (Wilier-Southeast) attacked and these built a lead of six minutes half an hour after the start.

This climbed to eight minutes with 140 kilometres and increased a shade more before the peloton accelerated.

A crash brought down Ag2r La Mondiale’s Jean Christophe Peraud, causing the Frenchman to have to exit the race. The accident happened when his team-mate fell on a roundabout, and meant he was the first DNF from this year’s Giro.

Tjallingii took the first intermediate sprint while behind, things would soon spice up as a result of a crosswind. This caused the peloton to splinter but things would reform after several kilometres. The only lasting effect was a reducing in the break’s lead, with the leading quartet just three minutes ahead inside the final 60 kilometres.

Tjallingii was psyched to do what he could while clear and targeted the King of the Mountains jersey. He led over the day’s only climb and duly moved to the top of that classification. After the summit the break knuckled down again, conscious that the bunch was chasing hard, and had just under two and a half minutes left heading onto the first of two 14 kilometre finishing circuits.

The peloton halved this advantage on that first lap and the tumbling advantage prompted Van Zyl to strike out alone with 12 kilometres remaining. He had a 52 seconds gap with ten to go and with four kilometres left, was still 33 seconds ahead.

However the long, straight roads left him with nowhere to hide and the bunch relentlessly hunted him down, finally closing the gap with 1.7 kilometres left.

Kittel’s Giant-Alpecin team were driving hard at the front to try to set him up. The Bardiani team pushed forward and led towards the kite, but Giant-Alpecin moved to the front again and tried to maintain control. They led out the gallop and with Kittel in superb form, the German had no problems in galloping home well clear.

That earned him the pink jersey and the chance to savour the race lead on Monday’s first rest day.