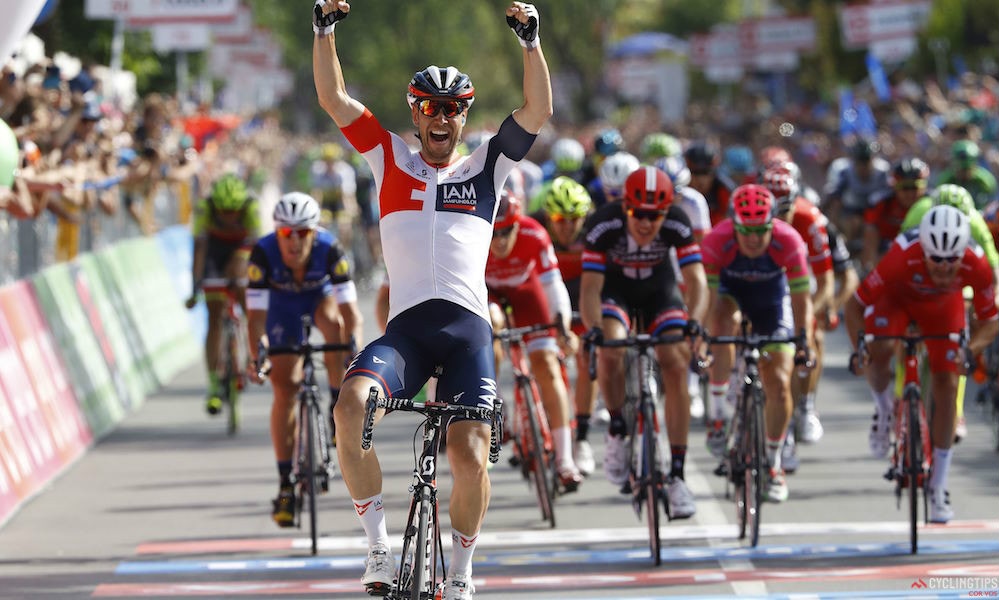 Two days after IAM Cycling owner Michel Thétaz announced the team would not continue into 2017, German Roger Kluge put his powerful frame to good use and attacked inside the final kilometre, bridging to Filippo Pozzatto (Wilier Triestina-Southeast), before passing the flashy Italian and winning the stage.

“I’ve been a pro for six years and this is the big victory I have been looking for,” said Kluge, silver medalist at the 2008 Olympic points race. “It’s a dream. It wasn’t planned at all. I was working for Heinrich Haussler, closing the gap for him but I saw a possibility to get away. The finishing line was very near.

“It’s a strange feeling. We were very disappointed to hear that our team is going to stop at the end of the year but we decided to stick together and it’s wonderful to come up with a victory to make it up for our disappointment”.

Giacomo Nizzolo (Trek-Segafredo) led the peloton home in the same time as the winner. Nikias Arndt (Giant-Alpecin) rounded out the podium in third.

The general classification remained unchanged, with maglia rosa Steven Kruijswijk (LottonNL-Jumbo) finishing safely in the peloton, along with all of the other GC contenders.

“It’s been a long stage but quite a nice day,” Kruijswijk said at the finish. “I’ve enjoyed riding with the maglia rosa as much as I could because I knew this was my last easy day before some hard stages coming up, starting tomorrow. It’s a stage with a hard and spectacular finale after a tricky downhill. I’m ready.”

The 99th Giro d’Italia is in the home stretch, and the 17th stage, from Molveno to Cassano d’Adda, was the last opportunity for the sprinters before the finish of the race in Torino on Sunday.

The 196km stage included a rolling first half, but once the riders were over the Category 4 Passo Sant’Eusebio, it was a pan flat ride to the finish.

The breakaway established quite easily, a possible sign of the fatigue that has set in and a tough couple of stages coming up in the Alps.

With the likes of Marcel Kittel (Etixx-QuickStep), Andre Greipel (Lotto-Soudal), Caleb Ewan (Orica-GreenEdge) and Elia Viviani (Team Sky) all having packed their bags earlier in the race, the stage looked to come down to a two-man drag race — maglia rossa leader Giacomo Nizzolo (Trek-Segafredo) and Sacha Modolo (Lampre-Merida) appeared to be two fastest sprinters left in the race.

The peloton brought the breakaway’s lead to under a minute with 35km remaining, but after the second intermediate sprint three riders attacked. Lars Bak (Lotto-Soudal), Ignatas Konovalovas (FDJ) and Maxim Belkov (Katusha) made the junction to the leaders with less than 25 kilometres to go, creating a formidable six-man lead group.

Zhupa began to pay the toll of spending all day out in the lead, as the Albanian began skipping pulls and sitting on the back of the group.

With eight kilometres to go the peloton rode through the town of Treviglio, home to the Bianchi factory, the type of frame that race leader Kruijswijk and his LottoNL-Jumbo teammates ride.

Trek-Segafredo and Lampre-Merida were nowhere to be seen at the front of the peloton, as no team fully committed themselves to bring back the leaders. The gap still hovered around 15 seconds with five kilometres to go.

Sonny Colbrelli, the sprinting hope of team Bardiani-CSF, was nudged off the road on the run-in and showed great bike handling skills not to crash as he swerved through the grass. He did, however, lose all hope of contesting the finish.

Bak attacked the breakaway as the peloton swooped in for the final kill with under 2km to go and he was soon joined and passed by Pozzato.

Through the final curves before the finishing straight Pozzato looked like he might hold on for the win, but Kluge was charging hard.

Kluge passed Pozzato in the final couple hundred meters, as the peloton hesitated to open the sprint with Nizzolo and Modolo stuck on the front of the peloton.

The IAM rider comfortably sat up and coasted across the line arms raised in victory with Nizzolo and Ardnt completing the podium. Modolo could only manage fourth as him team did a bulk of the pace making throughout the day.

“I have nothing to regret,” Nizzolo said. “I’m angry but it’s normal. It would have been so fantastic to win my first Giro d’Italia stage here, close to home. I had one teammate too few to close the gap on Roger Kluge, but that’s because my team had to work extremely hard earlier on to chase down the breakaway. I still have a chance to win a stage on Sunday in Turin.”

Kruijswijk still leads Chaves by three minutes in the general classification, with Valverde sitting a further 23-seconds down.

“A lot of riders, including the most famous ones, came to congratulate me this morning for what I did yesterday,” Kruijswijk said. “I know they liked the way I raced. They were congratulating me on yesterday’s ride, not on keeping the maglia rosa until Turin. I myself don’t think that I’ve already won the Giro. The only thing I can do is to try my best, and do what I have been doing for the past two and a half weeks. I’ll do it with confidence because I don’t have a weak point.”

On Thursday, the peloton will tackle the longest stage of this year’s Giro, as they ride from Muggio to Pinerolo. At 244km, it will be a long day in the saddle for the riders. The mostly flat stage does get lumpy toward the end, with a tough Category 2 climb toping out with just 20km to the finish.

Breakaways have not had a lot of success at this year’s Giro, and with two tough days in the Alps to follow on Friday and Saturday, the peloton may just allow a breakaway to disappear up the road.

• This was the fourth stage in a row with a first-time stage winner at the Giro d’Italia. After Esteban Chaves, Alexander Foliforov, and Alejandro Valverde, Roger Kluge took his first Grand Tour victory — as well as his first WorldTour win. His only previous podium at the Giro was third, in the last stage last year in Milan, where he won the bunch gallop behind breakaway riders Iljo Keisse and Luke Durbridge.

• For the first time, three different German riders have won at least one stage in a Giro d’Italia (with Marcel Kittel, André Greipel and Roger Kluge). German riders now have taken 32 stage victories at the Giro since 1932, when Herman Buse won Stage 2 from Vicenza to Udine. May 25 is the anniversary of Rudi Altig’s stage victory in 1967 in a criterium in Palermo.

• This was the 13th podium and still no stage victory for Giacomo Nizzolo at the Giro d’Italia (nine second places, four third). Only Pietro Rimoldi (with five second places and nine third) has reached more podiums without ever winning a stage (in the 1930s).