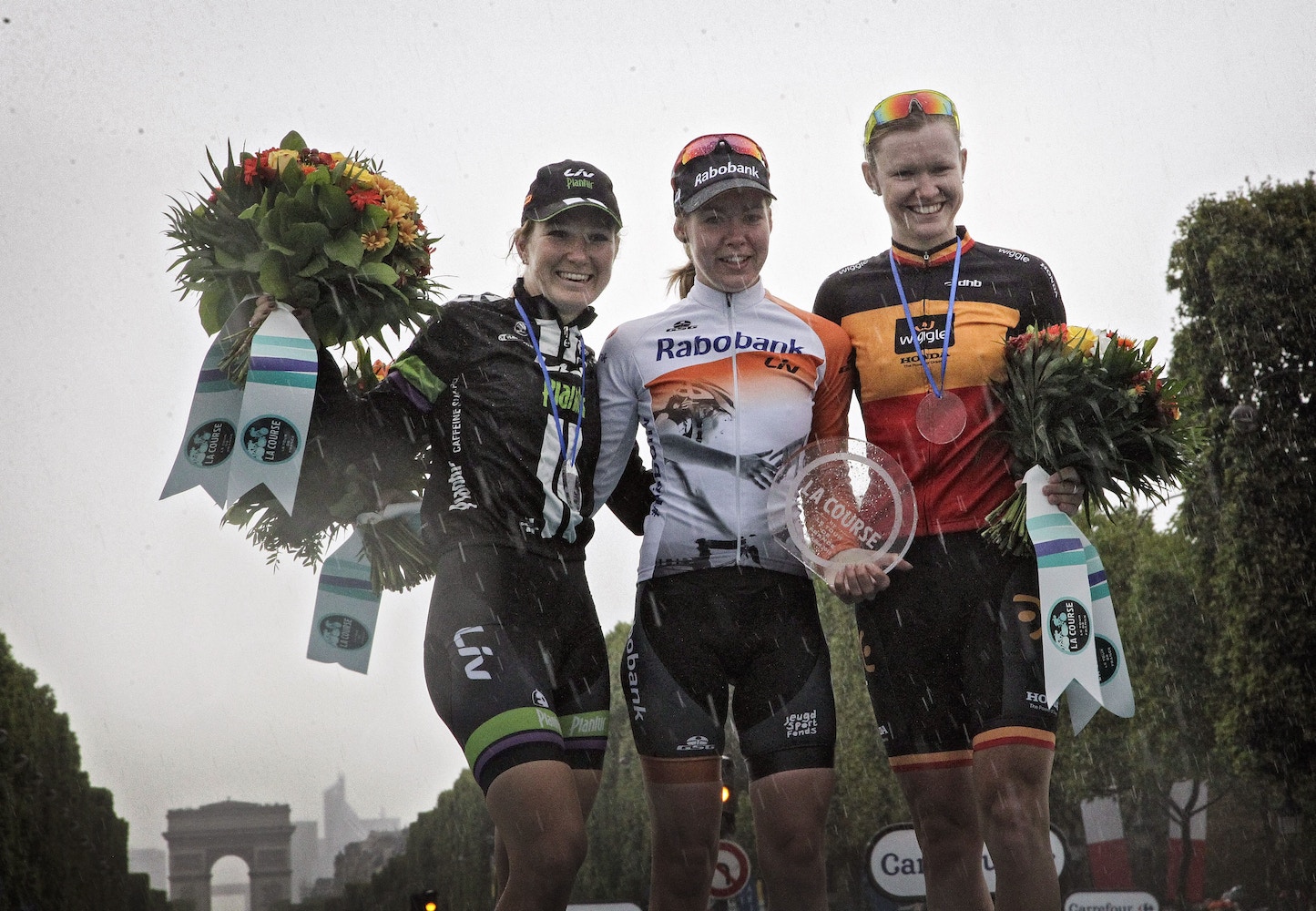 An audacious breakaway attempt in the final lap of La Course has given Dutch rider Anna van der Breggen the biggest victory of her career.

Van der Breggen's victory came despite terrible conditions, with heavy rain falling throughout the event and turning the Champs-Élysées into an ice skating rink. This is the second consecutive La Course by Le Tour de France, yet has sky-rocketed to become one of the most coveted events in elite women's cycling.

Last year's inaugural winner Marianne Vos was forced out of competing due to an injury, and so took to the mike instead to cover the event. The race started under cloudy conditions and sure enough after three laps rain had started to fall, making for a very dangerous race. The peloton soon began to thin out due to the tough conditions and multiple crashes.

With 55km remaining multiple breakaway attempts were nullified; riders clearly not keen to allow a breakaway to gain an advantage in the wet conditions.

The British National Champion Lizzie Armitstead of Boels Dolmans Cycling Team was at the front of the field, ensuring she wouldn't repeat the late crash that ruined her race last year. Maura Kinsella of the Optum P/B Kelly Benefit team was not so lucky, highlighting the treacherous conditions. Kinsella went down as she approached a seemingly innocuous left hand corner, but in such conditions the course was more like an ice skating rink then a cycling race.

Fresh off a victory at Internationale Thuringen Rundfahrt der Frauen, Gracie Elvin of Orica-AIS attacked with 45km remaining, hoping to repeat her long solo victory. Elvin extended her advantage to almost 20 seconds, but was brought back with 37km remaining.

Orica-AIS continued their aggressive riding as Lizzie Williams rode off the front, shortly after Elvin was brought back. The ever-attentive Rabo Liv Women's Cycling Team brought the move back very quickly, clearly hoping for a sprint finish.

See more from Orica-AIS on our dedicated OGE channel

Crashes became pandemic as rider after rider ended up on the ground, seemingly at each corner which was no surprise given the intensity of the race. The average speed had increased steadily and with 25km to go was sitting just below 41kph. Another crash with 23km to go claimed 20 riders and reduced the peloton to just over 30 riders.

Orica-AIS were by far the most aggressive team in the race, trying to break the peloton on the uphill section of every lap. This caused another increase in pace, this time going beyond 43kph.

With 15km to go the reduced peloton were still as one, the rain appearing to fall harder the further the race went on. Rabo Liv Women's Cycling Team went to the front with 14km remaining trying to control the race, but Orica-AIS rider Amanda Spratt was having none of that. Her team once again attacked on the uphill, softening up the peloton with 1.5 laps to go.

With 8km remaining BIGLA Pro Cycling Team came to the front as the teams started to line themselves up for the final lap. Anna van der Breggen of Rabo Liv Women's Cycling team launched an attack with 6km left, trying to upset the rhythm of the lead out trains. Van der Breggen pushed her advantage out to 13 seconds, hitting the peloton at almost 50kph. With 2km to go her advantage was still at six seconds and the bunch appeared to be making no ground on the time gap.

Into the final kilometre and van der Breggen's advantage was still at six seconds; she was churning a huge gear pushing out enormous power to stay away. The sprinters were lining up behind her and with 200m to go they opened up their effort.

It would be too little too late though, as van der Breggen held them all off for a massive victory. Her daring attack rewarded with the biggest victory in women's Cycling.

Thanks to Graham Watson for this awesome shot!