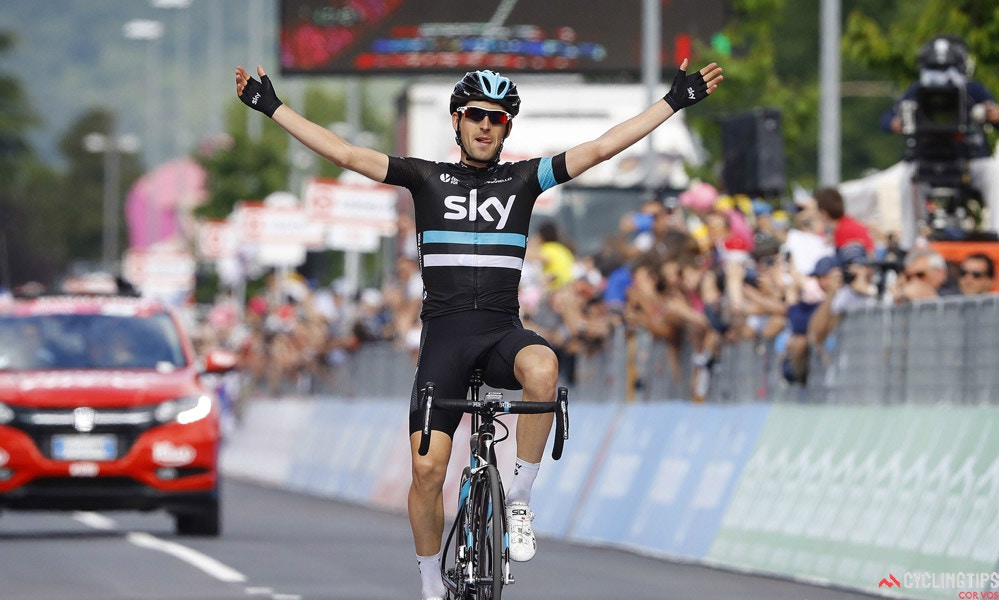 Mikel Nieve gave Team Sky something to smile about after what had been a very tough Giro d’Italia, winning stage 13 of the race with a super solo ride to Cividale del Friuli.

The Spaniard was part of a move that pushed ahead inside the final 35 kilometres. He and Joe Dombrowski (Cannondale) pushed forward on the climb of Cima Porzus, with Nieve topping the summit alone and time trialing to the final ascent, that of Valle.

Giovanni Visconti (Movistar) did what he could to bridge on that climb but Nieve had a 47 second advantage at the summit. With just 13.1 kilometres left from there, he had a strong chance of taking the stage and indeed held on all the way to the line.

He reached it 43 seconds ahead of a disappointed Visconti, while Vincenzo Nibali outsprinted Alejandro Valverde for third, one minute 17 back.

Crucially, race leader Bob Jungels had been dropped on the final climb. Despite a furious chase the Luxembourger rolled in too far back. Andrey Amador (Movistar) had started the day second overall, just 24 seconds off pink. While he too was dropped on that final climb, he was able to rejoin the Nibali/Valverde group on the descent and thus took over the race lead.

Nieve had started the race set to ride for Mikel Landa, but his compatriot was forced to drop out due to illness. This gave him motivation to try to turn things around.

“With Landa gone it was very disappointing. Of course the Giro team was a little low on morale,” he said. “We wanted to win stages and we managed to do that today, so it was good.

“After getting in the break, I found myself in good form. I was very good climbing but of course the descent were complicated. Thankfully I managed to get down on my own – it is better than being with someone else and it worked out.”

Amador made history in becoming the first Costa Rican to lead a Grand Tour. “I didn’t really imagine it,” he admitted. “I didn’t think it could happen. I am really happy to have this jersey.

“I am not a real climber. I didn’t have the legs as much as I wanted today, but Alejandro is really strong.”

He dedicated the win to his countrymen, saying that they had always supported him. “It is a beautiful way to get young people interested in cycling.

“We knew that the first day in the mountains was going to be hard. We expected what happened, we wanted to get someone in the break. The team couldn’t have done a better job, they were superb today. In the end Alejandro was really strong.”

Jungels is now 26 seconds back and accepted the result.

“It has been a really, really hard stage since the beginning. Astana was beating things up on the second last climb, I was definitely tied on that.

“With my bodyweight, I think it is hard to keep up with the climbers on these grades. I said to myself to stay as close as possible and then had Brambilla to help me. We tried to limit the losses as much as possible.”

Asked if he thought it was necessary for him to lose further weight to become a Grand Tour winner, he said he would wait to see how his career evolved. He is still only 23 years of age, after all.

“I am pretty convinced that you cannot change your body. Either it comes with the yers or not,” he said. “I will just continue like this. I can consider myself now a pretty good bike rider. Despite my weight I don’t climb so bad. I will just see how this Giro continues.

“There are some stages that might suit me better, so we will see. I am not a defensive rider, so you never know.”

Stage 13 of the Giro d’Italia was a tough one, with the race from Palmanova to Cividale del Friuli definitely favouring the climbers. The 170 kilometre race included four categorised slopes, namely Montemaggiore (km 50.6), Crai (km. 74), Cima Porzus (km. 131.4) and Valle (km. 147.9). The latter came just 13.1 kilometres from the finish and was certain to prove decisive.

Bob Jungels started the day in the pink jersey, 24 seconds ahead of his closest rival Andrey Amador (Movistar), but had admitted on Thursday that he wasn’t sure how things would go.

Tim Wellens (Lotto Soudal) had missed the move and set off in pursuit with several others. He soon dropped them and pushed on alone.

The biggest danger man in the break was Ulissi, who had started the day just two minutes 47 back in tenth overall. This forced Jungel’s Etixx-QuickStep team to chase, burning up valuable energy.

Those up the road knew that Ulissi’s presence spelled trouble and this prompted Denifl to jump clear. Behind, Visconti had attacked the peloton and bridged up to the break. Denifl took maximum points atop the climb, while behind Cunego and Visconti duelled for second place. However a dangerous kink in the course immediately before the prime line made things unsafe and Visconti hit the deck.

He was however able to remount and join the break again. With 100 kilometres remaining Denifl was 50 seconds ahead of the remainder of the big break, while the main GC riders – Jungels included – were a shade under two minutes adrift.

Etixx-QuickStep decided to back off and the Ulissi group was able to extend its lead to three minutes. Denifl went over the top of the day’s second climb alone, once again taking top points, while behind Cunego again bettered Visconti for second.

Denifl’s bid for glory ended on the descent when he was reeled in by the chasing group. The Maglia Rosa group was two and a half minutes back at that point, approximately 75 kilometres from the finish, but rose to over three minutes with 50 kilometres left. Ulissi was race leader on the road but Astana were driving the pace as the riders moved onto the penultimate climb, cutting the lead.

BIG BID FOR A STAGE WIN

Nieve put in an attack with 35 kilometres left, drawing Dombrowski clear with him. The latter wasn’t able to stick with the Spaniard and was caught by Visconti, with Matteo Montaguti (Ag2r-La Mondiale) also bridging.

With 17.7 kilometres on the clock Esteban Chaves (Orica-GreenEdge) attacked. He didn’t get a gap, but his surge stretched out the group and caused Jungels to be dropped. He kept his cool and after several minutes of chasing, rode back up to the rear of the group.

Further ahead, Visconti attacked and went clear of the other two chasers, closing to 47 seconds behind Nieve with 16.7 kilometres left.

Meanwhile Valverde tried his own move. His surge was covered but then Nibali blasted clear and succeeded in maintaining a gap. Jungels was once again dropped and this time it was for good.

Lotto NL-Jumbo were riding to safeguard Steven Kruijswijk’s GC position and brought Nibali back. The latter’s Astana team then moved to the front and set the pace, while behind Jungels continued to ride up at his own rhythm and to try to limit his loses. He was followed by Ryder Hesjedal (Trek-Segafredo), who was clearly far off his previous Giro-winning form.

Nieve was riding well and with 14.5 kilometre left, was 42 seconds up on Visconti. The Italian was doing his best to try to close the gap, but wasn’t making much progress.

Nibali then went again, having had a breather when team-mate Scarponi led the group, but Valverde and the others were able to hold him. Ilnur Zakarin (Katusha) was in difficulty, though, and was dropped from that small bunch. Amador was also out the back.

Nieve went over the top 47 seconds ahead of Visconti and, with just 13.1 kilometres left, had a strong chance of taking the stage.

Fuglsang moved to the front of the favourites’ group, riding for Nibali. They went over the top just under two minutes behind Nieve, while Jungels was a further 50 seconds back and doing what he could to rescue the situation.

Zakarin descended well and got back to the Nibali/Valverde group. Behind, Jungels was chasing furiously but got one corner wrong and almost came a cropper.

Amador had also been dropped but he was much closer to the Nibali group and succeeded in bridging across, putting himself in a position to move into pink. However Jungels had been joined by Gianluca Brambilla and the duo were trying to scupper the Movistar rider’s chances.

With three kilometres to go Nieve was 50 seconds up on Visconti and looking set for the stage win. The Nibali group was one minute 43 back and working well together, while Jungels was at two minutes 31 seconds. He had started the day 24 seconds behind Amador and, with that gap of 48 seconds, was looking certain to be out of the Maglia Rosa.

Nieve raced in to take the win, giving Sky a boost after what had been a tough Giro d’Italia. Visconti trailed in 45 seconds back, while Nibali won the sprint for third and took the bonus available for that.

Brambilla dug in deep for Jungels using his last energy before sitting up in the finish straight. Jungels drove for the line, lying low in an aerodynamic position, but finished two minutes seven seconds down. This was 50 seconds behind the Nibali group, ensuring his time in the Maglia Rosa was at an end, at least for now.