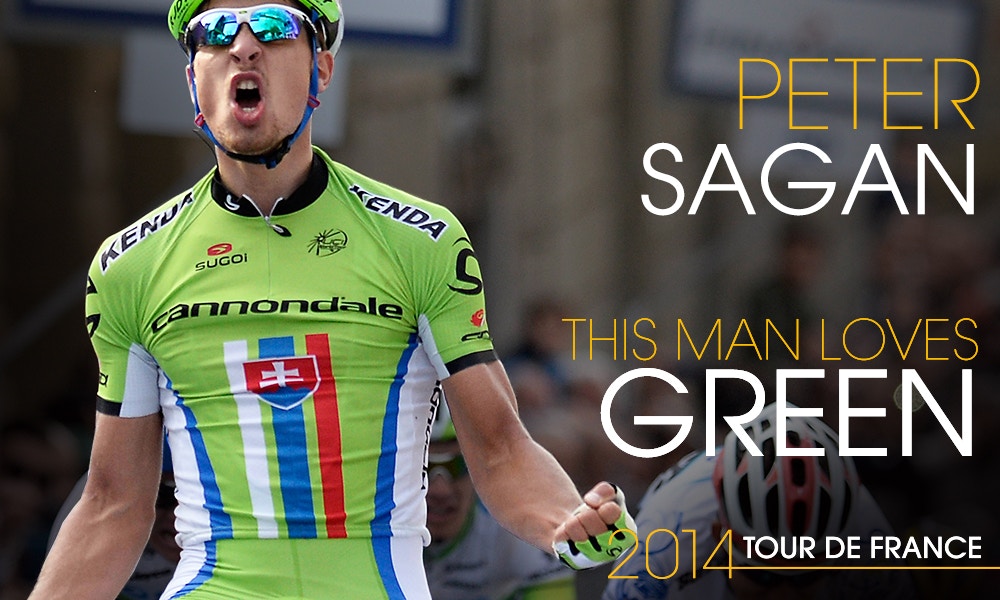 Cannondale's Tour de France leader has the kind of nicknames that suggest you'd want to keep your distance when he's on the bike.

Not that many can keep up, as he's already proving at this year's Tour. We find out more about the Slovak cycling sensation.

In his MTB days he inherited the name Terminator. Probably self-explanatory. Some outside-the-box thinking during last year’s Tour de France saw that take on a slightly different angle – the Tourminator. This year, though, we have a feeling green might be influencing a whole new direction… See below!

A Cannondale with bespoke Hulk themed painting artwork (his team mates are all riding Cannondales with wild animal themes). Check out his machine here!

He calls a spade a spade

In a world that’s become oppressively PC at times, Sagan is a bit of fresh air. Asked in a media conference if he could one day become a GC rider, what was his response? In short – he’s asked the same question year in year out. He suggested they look at transcripts from the previous year’s conference to get the answer. Ouch.

Sagan fought to get himself in the green jersey at the start of the 2013 Tour de France, and he stayed in it right the way through. The powerful cyclist has picked up where he left off last year, wearing green again in the 2014 Tour de France. The question is – can he keep it two years in a row?

In fact, clearly this man has a thing for green. Aside from it being his team colour, he’s taken out the green jersey equivalent in this year’s Tour de Suisse, Amgen Tour of California and Tirreno - Adriatico.

Along with his brother, Sagan had his first taste of competitive riding in 1997 when the boys’ parents registered them in local race. Cracking good decision – parents do know best. Ten years later and Sagan was declared the country’s most talented rider of the year. A year after that, and a MTB World Championship title also under his belt, and Sagan caught the attention of Liquigas-Doimo. By September 2009 Sagan had signed his first pro contract with the then Liquigas – Cannondale.

Because his first pro race was none other than the Tour Down Under in January 2010. A 19 year old whippet, Sagan crashed in just the second stage. It was little deterrence – he continued to ride with 17 fresh stitches in his arm and thigh.

Get your dose of more Tour de France here