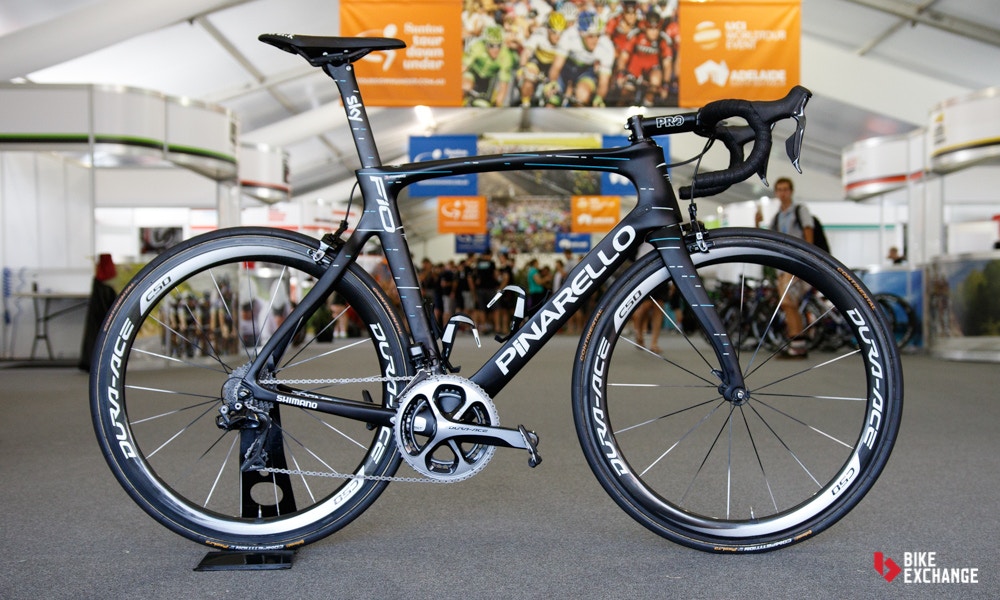 Pinarello has revealed the latest iteration of its elite performance road bike, the Dogma F10. The new bike will be used by Team Sky throughout the 2017 season, and we were lucky enough to get a close look of the new machine at the Tour Down Under.

Bike manufacturers will typically unveil new bikes prior to major events such as the Classics, Giro d' Italia or Tour de France, and sometimes at large trade shows such as Eurobike, but Pinarello has decided to release their new bike in line with the start of a new season. The previous Dogma, the F8, has been around since mid-2014 and to date, is Pinarello's best-selling bike.

But enough back story, let's get into the top ten things you need to know about the new Pinarello Dogma F10. The F10 was inspired by Pinarello's time trial bike, the Bolide, with a concave downtube shape. The new shape is said to reduce drag by as much as 12.6% around the downtube area, and consequently appears to almost wrap around a small drink bottle, underlining the current approach of top brands to see the bike as a whole picture with the rider and accessories in mind. The seattube further contributes to the potential aerodynamic gains with three bottle cage bolts, the lowest option reducing drag while also allowing for larger bottles, a nice touch.

The shapely fork of the F8 again appears on the F10, but if you look closely you can also see a 'flap' behind the dropouts which further reduces drag, albeit by a small amount. Keep in mind, we are talking about Team Sky's bike, the creators of the phrase 'marginal gains', so even the smallest advantage is appreciated.

The remaining tube shapes are consistent with the F8, using the 'Flatback' design which mimics an elongated trailing edge at various yaw angles.

Like many bikes, the F10's tube shapes have been manipulated using computational fluid dynamics (CFD) and Finite Element Analysis (FEA) to ensure optimal aerodynamics. However, with Pinarello's roots firmly planted in Italian heritage, they were quick to point out that the aesthetic of the bike superseded any unappealing alterations in the name of aerodynamics. The F10 was designed to cater specifically for Shimano's new 9150 Di2 groupset, housing the junction box in the downtube, as opposed to the underneath the stem where it has historically been found. Some manufacturers such as Trek already offer this solution (on the Madone), allowing riders to recharge and update the system far more unobtrusively than in the past.

And for those keen on running with other groupsets, we've already seen eTap equipped models doing the rounds on social media and Team Wiggins will also be riding the F10 in 2017 equipped with SRAM eTap. Campagnolo is too represented on at least one model on the Pinarello website.

Stiffer than the F8 All up, the F10 is said to be 7% stiffer than the F8, although details on how exactly that is achieved are scarce. Pinarello say it's down to 'cutting edge materials, cycling expertise, insights, and great know-how'.

Torayca T1100 1K carbon fibre is the choice of material for the majority of the frame and fork, similarly to the F8.

Lighter than the F8

As well as being stiffer, the F10 has managed to shed weight, Pinarello claiming the new model is 6.3% lighter than the F8. A 53cm raw (unfinished) frame weighs 820grams, which doesn't put it in the lightest of lightweight frames but it's not too far away either.

No plans for a Disc version... yet.

Although the F8 was available in a disc-equipped version, there are no plans (at the moment) for the F10 to follow suit. This could obviously change with the UCI granting the use of disc brakes in WorldTour events for 2017. The disc-equipped F8 is also the reason the latest model has been labeled the F10, the F8 disc is essentially the 'F9'.

The one and only In a similar scenario to the F8, the F10 will once again have the capability to cover almost all terrain and route profiles riders will encounter in 2017. Rather than create separate bikes for the mountains, flat roads and rough terrain, the F10 has been developed to be a versatile all-rounder, so expect to see it underneath under Chris Froome on the mountains of France as well as under Elia Viviani on the flat roads approaching a final sprint.

Velocite have been designing and developing bikes, frame and wheels since 2008 and claim that Pinarello has taken its patented design without authorisation. The above mentioned, 'concave downtube' is at the heart of Velocite's unhappiness. The company claiming Pinarello infringed its patents in an open letter published on Velocite's blog. Here's a quick excerpt which explains the frustration.

Velocite also mentions having raised the issue previously with Pinarello when the Bolide was first released as it also adopts the concave tube profile, "I initially alerted you to this issue in May once I observed our design and associated aerodynamic performance claim on the Bolide TT bike, only to be met with complete silence".

It remains to be seen what (if anything) will come of this, but given the success Pinarello has had, it's unlikely this topic will go quietly into the night. The geometry of the F10 is unchanged from the F8, which perhaps proves where the Italians already have things right. Good news for those at either end of the height spectrum, the F10 will be available in 13 different sizes starting at 42cm, right up to 62cm.

There will be eight colourways to choose from including a Team Wiggins edition which will no doubt be popular, as will the Team Sky replica option.

Pinarello did a wonderful job keeping details of the new bike under wraps, which would normally equate to a long wait time for the general public to get their hands on it. However, word is the new bike has already been shipped to distributors around the world and is available to purchase right now! We don't have confirmation of prices, availability or builds, but they will be available shortly. As well as having the latest bike, we can conclude that Team Sky are at the top of the WorldTour team hierarchy of importance as they have the latest Shimano 9150 Dura-Ace Di2 groupset, which many other teams won't have access to until they return to Europe. Due to shipping issues with the new Stages power meters, the team have had to use previous Dura-Ace cranksets at the Tour Down Under but expect to see the new Dura-Ace groupset in its entirety on Team Sky bikes first.