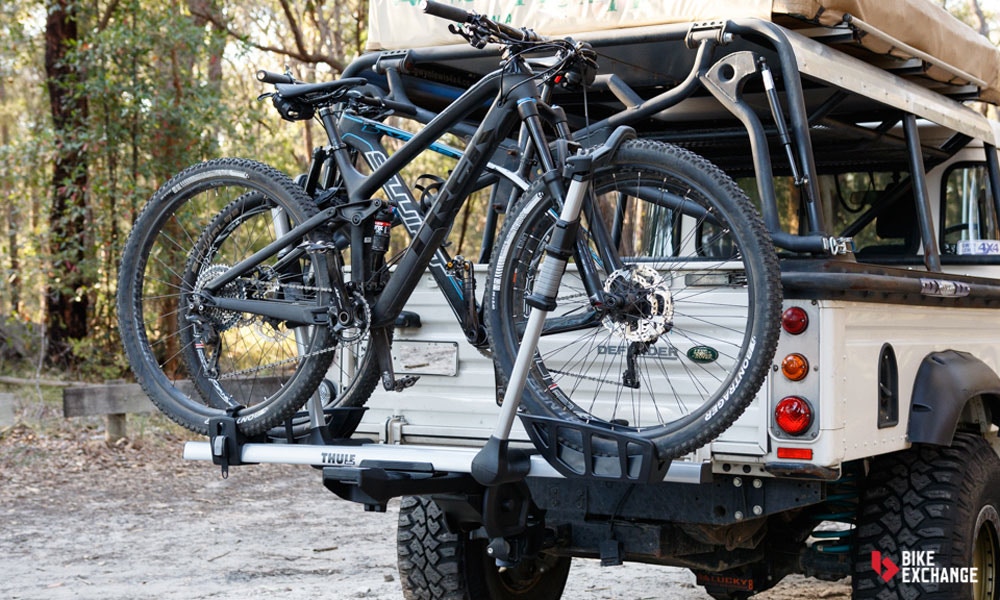 Based in Sweden, Thule has long established itself as a leading luggage and sporting goods transport accessory company. The company’s roof racks, bike carriers, and rooftop boxes are commonly regarded as the benchmark and are commonly seen in use around the world as a result. So when such a brand uses words such as premium, Pro or flagship, you typically take notice. Such is the case with Thule’s T2 Pro Hitch two-bike carrier, a new model that headlines Thule’s expansive range of hitch-mount racks.

The T2 Classic and its various platform-style iterations have existed for over a decade and in that time has built a strong following with mountain bikers, especially downhill riders, for its super easy mounting of bikes, regardless of frame design. That’s because the T2 holds bikes purely by the wheels, and doesn’t contact the frame at all. This is achieved with a clever ratcheting arm that locks the front wheel upright, with the rear wheel then strapped in place.

The T2 Pro is one versatile rack, fitting just about any bike without the need for aftermarket adaptors, including fat bikes with 5in wheels. With bikes in place, the rack can be tilted for rear boot access, while not in use, the rack can be flipped upright and out of the way. This is the nicest, most secure and easiest to use hitch mount rack we’ve ever used – read on to find out why.

With any car rack system, its ease of installation and consequent fitment will dictate just how often it’s put to use. For the T2 Pro, its ease of fitment is one of the key upgrades seen over the original T2 Classic. Our T2 Pro review sample rack arrived in its original sale box, a rather cumbersome item to move around without a second person or carrying cart. The rack requires some basic assembly prior to use (tools included), something that should take approximately 30 minutes if you’ve never done it before. Assembling the rack is done on the car, by first installing the centre mainframe into the hitch, and bolting on the additional pieces from there. If you can build a basic piece of Ikea, you’ll have no trouble with this Swedish item.

Fitting the rack into the hitch is a true highlight and a big step up from racks we’ve used in the past. The T2 Pro features Thule’s new tool-free ‘AutoAttach’ system, which, removes the need for any locking pins, bolts or spring clips at the hitch. Instead, you simply slide the rack into the 50mm hitch and use the integrated hook to latch into the hitch’s pin hole. From here, you tighten the stinger knob until all rocking is removed and lock it in place (locks included). Once locked in, the result is the most secure and ‘locked’ rack we’ve ever used. This is because by tightening that knob, a small wedge at the end of the square stinger is wound in, further expanding the effective size of the square until it’s firmly locked in place. This is one of the key reasons why despite being heavier to handle (the T2 Pro is 23.64kg!), hitch racks remain despite the availability of many good tow-ball mounted racks. Simply, a bike rack using the tow-ball system just cannot replicate the sheer strength, security and mounted rigidity of a hitch system.

Before proceeding, it’s worth noting that the T2 Pro sold in Australia (9034) is only compatible with 50mm (2inch) square hitch receivers. A number of smaller cars, including our originally intended older Subaru Forester, feature a 31.8mm hitch (11⁄4 in) – something this rack cannot be used with. Thule tells us that just about all new cars being sold in Australia are likely to have a 50mm hitch, and not the smaller option. Thule’s T2 Pro (9035) does work with the smaller 1 1/4in hitch but isn’t available in Australia. Either way, be sure to double check that your car is compatible.

Likewise, we ran into a couple of fitment issues with the modified 4WD pictured, where the spare tyre mounted to the custom cage prevented us from fitting the first bike. Removing the tyre solved the issue, before then presenting a further issue of super wide downhill handlebars coming into contact with the car. The issue we experienced is extremely rare and is a result of the hitch set further back behind the bumper than what Thule suggests. Likewise, the spare tyre was placed further back than what is considered normal. Consult Thule’s hitch compatibility guide if you’re in doubt. With the rack firmly in place, the two aluminium bike trays are independently adjustable (5mm hex key needed) to ensure handlebars and saddles of the two bikes don’t overlap. From here, mounting a bike is simply a matter of lifting it onto the rack, placing the wheels into the plastic holders and then the front arm is brought over the top of the front wheel and pulled down. Strap the rear wheel in and your bike is fully mounted. As expected, removing the bike is equally as fast. Unstrap the rear wheel, click the front wheel arm button and release. The bike is now free. With such a quick removal, theft while running in for a cup of coffee is an issue, and for this, the T2 Pro comes equipped with reinforced steel cable locks (lock core and keys included) integrated into each wheel arm. These locks are long enough to feed through the fork and front wheel, and at a stretch on some bikes, through the frame too. Mounting a number of different bikes proved no problem, from fitting a road bike with 23c tyres, to engulfing a new Trek Fuel EX with generous 29x2.4in tyres (29 x 2.25in tyre pictured). After all, this rack has been designed to handle problematic fat bike tyres without the need for additional adaptors.

In its stock form, the T2 Pro carries just two bikes. Thule does offer a two bike add-on (9036) kit for this rack, taking the capacity to four bikes, but such an item does cost AU$699 – taking this premium rack to an eye-watering price.

Hit the road with bikes loaded and it’s clear the T2 Pro is extremely stable. We’re used to looking in the rear view mirror to see bikes wobbling a little in the wind, but it just wasn’t the case here. Instead, the bikes remain still in an unbelievably comforting way. This is mainly down to the way the bikes are held in, with the front wheel firmly locked from being able to turn in the wind.

One of the T2 Pro rack’s strong suits is its ground clearance, with the whole rack sitting well above the line of the hitch rack. Getting safely in and out of steep driveways is no concern, likewise for getting access to more remote trails. With bikes fully loaded, getting access to most boot designs shouldn’t be an issue. The handle at the end of the rack hides a simple squeezable release that lets you tilt the whole rack away from the car.

Once your ride is done and the car is unloaded, the rack can be easily tilted into a vertical position using that same handle release. This is a nice feature and one that we suspect many owners of such a rack will make use of, especially given just how cumbersome the 23.64kg rack is to remove and store away.

Worthy of note is that our road rules differ to the USA’s and unlike the VeloCompact range, something we’ve recently reviewed, the T2 Pro does not feature an in-built auxiliary lighting or number plate provisions. Instead. if you’re using the T2 Pro on Australian roads, you’ll more than likely need to purchase Thule Light Board 976 (at an additional AU$149.95) to ensure your number plate and tail lights are visible (not pictured or tested).

This lack of a number plate holder and lights is a let-down given the high asking price of the rack, which is pushed to over a grand once you account for such an addition.

We’re of mixed feelings sending the rack back to Thule. Despite a few fitment issues specific to the chosen vehicle, this is hands down the best hitch-mount rack we’ve ever used and can see why its original version has such an iconic following. It’s rock solid on the car, securely holds bikes and yet remains one of the easiest to load and unload. Yet despite such praise, that price is one that’ll scare most away, and unless you’re going to leave this permanently affixed to the car, it’s a heavy unit to lug out before and after each ride.

In the end, if we treated our car as a means to get to the trails and for the occasional town runabout, then this would be our first choice carrier.

Note: Reviewed was the T2 Pro which retails for AU$899. Since arranging this review, Thule has released the ‘T2 Pro XT’ in some markets. This updated version offers increased spacing between the two bike trays to ensure no rubbing issues if carrying two fat bikes or similar mountain bikes. Additionally, the XT version is available in a matte black option to accompany the silver colour as tested. This updated model will be available in Australia by mid-year.