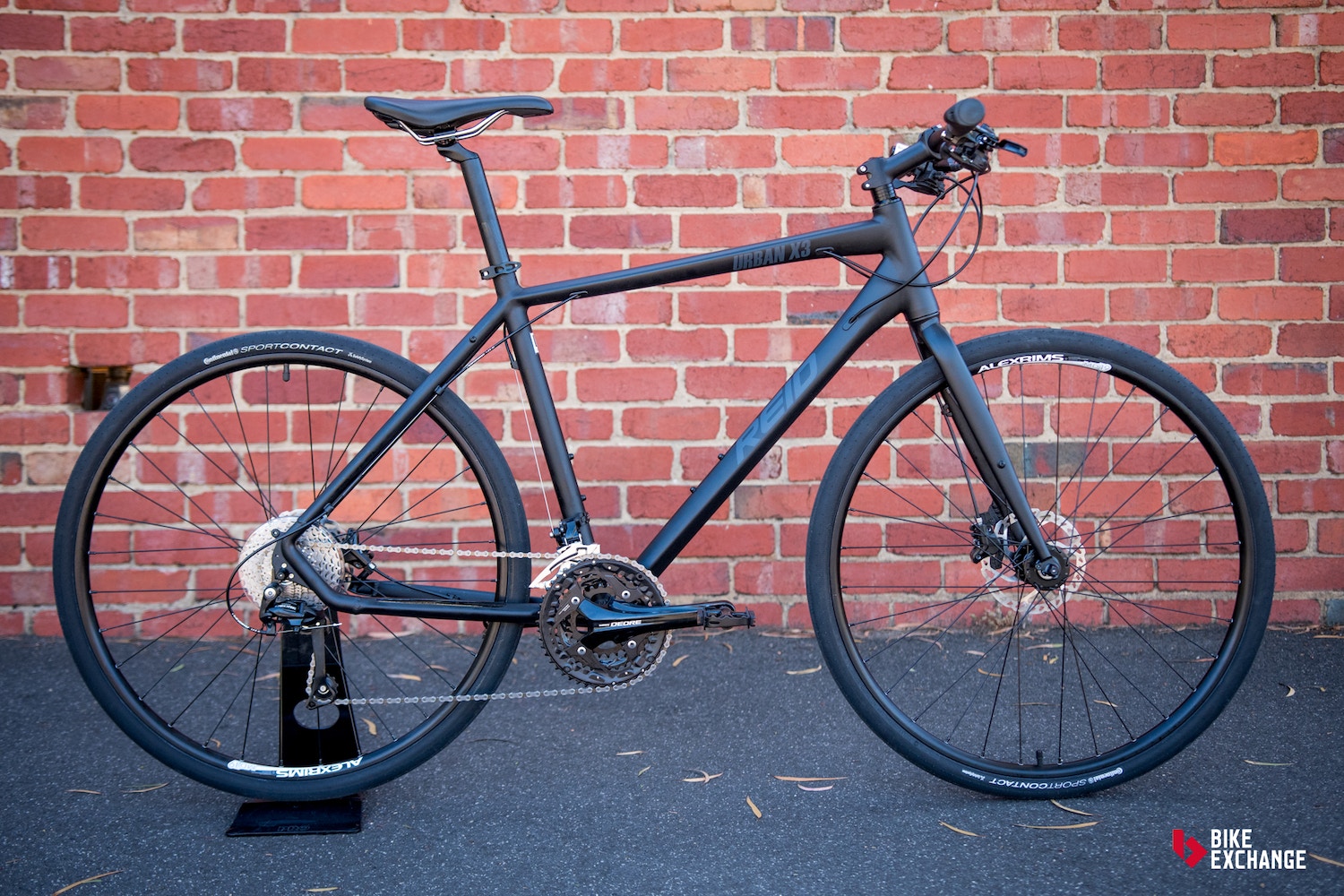 The Reid Urban X3 was designed for 'fast, urban commutes', with a healthy list of components exceeding expectations at this price point. While it stacks up impressively on paper, the question is, does it perform just as well on the road, and does it serve its purpose as an urban bike?

Before we get any further into this review, it's worth pointing out what sets an urban bike apart from similar options such a flat bar road bike and hybrid bike. Urban bikes were specifically created with lower speed commuting in mind, and as a result, they often feature racks and wet-weather fenders. They tend to weigh a little more than flat bar road bikes as they are built to handle the rigors of the urban environment, and they also have lower gear ranges and a more upright position when compared to a flat bar road bike. Hybrid bikes are similar to urban bikes, but take things a step further with wider tyres, a wider range of gears, an even more upright position and often front suspension, making them suitable for non-sealed roads.

Based on this information, we're looking for the Urban X3 to feel robust, provide a comfortable ride with easy pedalling gear ratios and be suitable for commuting and recreational riding around local streets. The frame and fork for the Urban X3 are both hydroformed alloy creating smooth lines and optimising the tube shapes for additional stiffness without adding a heap of weight. Hydroforming refers to shaping metals through the use of a mould and high-pressure fluid. The aluminium tubing is placed into a mould and then high-pressure pumps are used to force the aluminium into the shape of the mould, creating a frame that provides stiffness without additional reinforcement or extra material. The hydroformed frame and fork of the Urban X3 are welcome and indicative of a bike in excess of its price tag. For more on frame materials and an in-depth description of aluminium, read our Bike Frame Materials Explained article.

The welds around the headtube are rather smooth and even, which suggests high-quality craftsmanship, although the welds at the rear of the bike and forks aren't as polished. The welds around the bottom bracket area, chain stays and seat stays are rather uneven and lumpy, and there's a noticeable unevenness side to side on the front forks. While some of the welds are uneven and lumpy, they are thick with no obvious gaps, so while they may not look the best, they should still be strong and robust.

As all good urban bikes should, the X3 includes mounts for rack both front and rear, with a starting price of AUD$39.99, if you buy them through Reid. The 'Urban' geometry provides a more upright position than a flat bar road bike, offering additional comfort and clearer vision through traffic and built up areas. The headtube angle of 71.5 degrees is almost identical to the 71.4-degree headtube angle of Reid's 'Granite' Gravel bike we tested, but not as steep as Reid's racey Vantage Comp 1.0 that we also tested. Both gravel and urban bikes are designed with lower speeds in mind, hence the 'slacker' angle to slow the steering down and be more stable at low speeds. The 1102mm wheelbase of the Urban X3 is longer than the Granite, typifying the extra stability of urban bikes to handle the rigours of the urban environment.

Internal cabling at the front of the bike is once again expected on higher priced options, but again, the rear of the bike isn't as polished. The front and rear derailleur cables run externally along the seat tube and seat stay after exiting the top tube, leaving them open to the elements and preemptive wear and tear. It's also in contrast to the front of the bike, which, is rather clean by comparison. The Shimano Deore drivetrain is well beyond what you would expect within this price range. Recently, we completed an article highlighting the [best hardtail mountain bikes for under AUD$1,000 and none of them came equipped with the 10-speed Shimano Deore. Granted the mountain bikes in that category have more features, such as front suspension and larger, knobbly tyres, but it does highlight the quality of the drivetrain. Ticking all the boxes for low-speed commuting, the Urban X3 has a triple crankset up front (three cogs) paired with a 10-speed cassette on the rear, providing a whopping 30 gears in total. In order from largest to smallest, the chainrings on the front feature 48T, 38T and 28T respectively, and when paired with the 11-34T cassette at the rear, provides ample range for the steepest of suburban hills, even when fully loaded. Scanning through the rest of the bike and the Urban X3 continues to perform well on paper. The Shimano M396 hydraulic disc brakes are more than what you'd expect at this price point and something all of our testers commented on. Opting for hydraulic brakes over a cable disc brakes or rim brakes has many advantages, the biggest being the consistent performance in adverse weather conditions. And as the system is sealed, it’s incredibly low maintenance, easy to operate and provides great power and better modulation (control). The choice of wheelset and tyres continues to impress, disc specific Alex MD19 rims are paired with Novatec sealed bearing hubs that should provide an extremely durable platform. The enormous puncture resistant 35c Continental Sport Contact 2 tyres should be equally durable and more than capable of navigating urban areas. We ran the tyres at 50psi (87psi the recommended maximum inflation) and measured the rear at 35.94mm and the front at 36.04mm.

We had a size large for the review that weighed 11.9kg with pedals and a bell, but without bottle cages. Reid sells direct to the public, which, enables them to keep their prices down, but does result in some additional work to be done by the consumer. Bikes that are shipped directly to the customer require some assembly, approximately 15% in fact. Reid state that bikes come '85% assembled' with "the final assembly required includes the installation of the handlebars, front wheel, pedals, and saddle, adjusting the brakes and tuning the gears."

While some of you would feel comfortable completing this final 15%, some won't, and if the bike is damaged because of incorrect assembly, it's not covered by your warranty. As a result, Reid recommends that the assembly is done by a qualified bike mechanic or other suitably qualified person. If you live close to a Reid store (there are six in Australia), you can collect your bike, fully assembled and ready to go. Otherwise, it's a good idea to factor the cost of a basic service into the bike's price. We had multiple people around the office ride the Urban X3 for various purposes including commuting and fitness riding. The easy, tool-free adjustable seatpost made swapping between people of various heights a breeze. The bike was described by more than one tester as "easy to ride". The flat grips add to the comfort at the front of the bike, and running the 35c tyres at 50psi provided comfort in spades. There were two key points that everyone that rode the bike commented on; the Shimano Deore drivetrain and the hydraulic disc brakes.

An ex-shop owner was impressed that Deore featured on a bike of that pricepoint, remarking about the smooth shifting. For most of us, the third 28T front chainring didn't get any use, and around mostly flat terrain like Melbourne's CBD and outer suburbs, it's basically redundant. For hilly areas like Sydney's CBD, the lower gear range might come prove more useful, especially when carrying a significant load on racks. Due to the number of gears, there is significant overlapping and cross chaining if you aren't proactive enough with shifting at the front, a scenario experienced more so by those who normally ride with single or double front chainrings.

The hydraulic disc brakes were the other standout feature and performed as expected. One of our testers who regularly commutes said they were "awesome" and added, "you can be really precise and they’re excellent for commuting because sometimes you do need to stop in a hurry even if the weather is bad.'" While the speeds reached on the Urban X3 would most likely not need the power hydraulic disc brakes provide, riding with them in all weather conditions provides plenty of confidence, and they also allow for huge amounts of clearance to run larger tyres if you wish.

It's difficult to test a tyres durability in a short-term test, but the 35c Continental tyres barely had a scratch on them after weeks of commuting, and as mentioned, there's still huge amounts of clearance available if you wanted to go larger. In contrast to most urban bikes, the X3, as described by Reid, is 'designed to give you an aggressive riding position for speed and handling, but slightly upright for everyday comfort and allowing for the visibility you need in traffic.' We would expect the geometry to be positioned towards a more upright posture, rather than an 'aggressive' one to better fit the urban geometry mould. As a result, one tester found the handlebars felt quite far forward and low, wishing to be in a more upright position to better look ahead for traffic hazards and pedestrians. It's quite surprising to compare the headtube length of the Urban X3 to the aforementioned, racey Vantage Comp 1.0. At 170mm the headtube length of the Urban X3 is 5mm shorter than Reid's 'aggressive racing machine' at 175mm, and not indicative of what we'd typically see on urban bikes. The other aforementioned bike from Reid, the Granite gravel, has a headtube length of 195mm, much closer to what we'd expect to see on the Urban X3. This suggests the bike is better suited to a road rider looking for a second bike to use as a commuter or for recreational activities.

The bike certainly feels robust and durable, and while we didn't take it off-road, we took it off plenty of curbs and across rough terrain and it didn't skip a beat. There is some cable rubbing at the front of the bike on the headtube, but no noise to speak of from the internal cables, which is most likely due to the reinforced entry and exit points, negating the need for any electrical tape fixes.

It's clear that Reid has played it safe with the black, stealthy look that's not going to polarize people and they've managed to transfer a great bike on paper to an equally solid performer on the road.

Details shown here are for the Australian market. Models and specifications for New Zealand may differ slightly so be sure to contact your closest store and have a chat with them. There are four sizes available; small, medium, large and extra-large, suitable for people from 153cm to 205cm. Our main tester is 184cm and rode a large.