Clarkey to Join Cannondale-Garmin in 2016 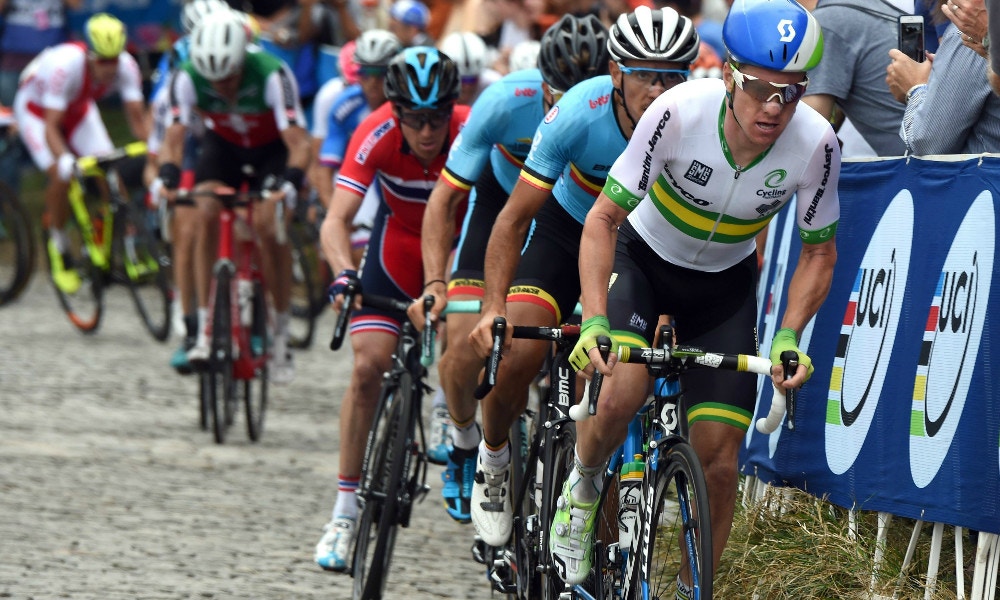 Cannondale-Garmin Pro Cycling recently announced that 29-year-old Aussie Simon Clarke will be joining the team in 2016. Clarkey has had incredible success over his career winning stages at all three Grand Tours, the Herald Sun Tour in 2014 and the Overall Mountains Classification at the Vuelta a Espana in his first-ever Grand Tour.

The young Aussie is universally loved within the peloton and showed his sportsmanship and selfless nature giving fellow countryman Richie Porte his front wheel in this year's Giro d' Italia. Clarkey is also a fierce competitor, fighting back time and time again on Stage 4 of this year's Giro d'Italia to stay with the chasing bunch and then out sprint them to take the maglia rosa.

The Aussie work horse is now back home in Andora taking a well deserved break after a hectic season. We caught up with Clarkey to chat about his new signing.

Congratulations on the big signing. Can you talk us through the change and how it came about?

Thanks. Well this year is the fourth year of my contract with Orica-GreenEDGE. The team works off two year contracts for most riders, which allows them to reassess their direction based on the performances over the past two years. The team really wanted to focus on the younger guys with Caleb Ewan, Esteban Chaves and the Yates boys. The priority is to develop a good sprint train and some climbing power to help those guys in the coming years.

This meant a switch away from the Ardennes and one day racing that I really enjoy, and is one of my strengths. So I thought about things and said 'do I see myself fitting into that new direction?' I spoke a lot with Jase my manager and as I will be 30 next year we thought maybe it's time to look for a new opportunity. The easy decision would have been to stay but I felt I had pushed things as far as I could with Orica-GreenEDGE so I made the hard decision to explore opportunities elsewhere and hope that the new environment can be beneficial and help me improve.

We spoke with a lot of teams and initially Cannondale-Garmin were not one of them, but they showed interest later in the piece so we started to explore that option. They have also made some big changes to their roster, and although it's not a brand new team, it almost feels that way. It's really exciting to be a part of.

What are you hoping to achieve with the new team?

We haven't mapped out a race plan yet, but that will come soon. Over the past few years I have gone better and better in the Ardennes Classics. I played an influential role this year and proved to myself that I can be competitive, which I hadn't been so much until this year. Hopefully next year I can try to improve on that.

The other big goal is to be selected for the Olympics. I went along to a test event at Rio with Brad McGee and it's a really tough course. I'm hoping to put in some good performances and play a supporting role for the leader of the Aussie team, similar to the world champs. Speaking of the World Championships, how did you find the race?

I have had some low back issues over the last six weeks, which had me questioning how deep into the race I was able to go. I was a little bit worried going into it, but felt great during the race. I probably started to be more active earlier in the race then I would normally be due to the back. With about 100km to go you would have seen me a lot more at the front of the group driving the pace and covering breaks. It probably worked out for the best in the end because that course was more of a Classics style course that suited the bigger guys using their horse power at the end.

The hills over the cobbles were especially tough. In the pro peloton is doesn't matter what the hill, the easier they are the faster people go up them. But these were real power climbs and we were pushing high watts for 30-45 seconds every lap just to get over them. Riding on the cobbles took about 100-150 more watts than a normal road as well.

When will you officially kick things off with the new team?

I'll officially start with the team on January 1, but any riders that transfer get permission from their current team to participate in training camps, so I'll be off to train with the new team in a few weeks.

Will you be back in Aus racing this summer?

Yes, definitely. I always come back to Australia for the summer of racing. This year I'll be back at the end of October. The team and I haven't mapped out the race schedule as yet but most likely nationals, the Tour Down Under and the Cadel Evans Great Ocean Road Race.

Thanks Graham Watson for the images of Clarkey