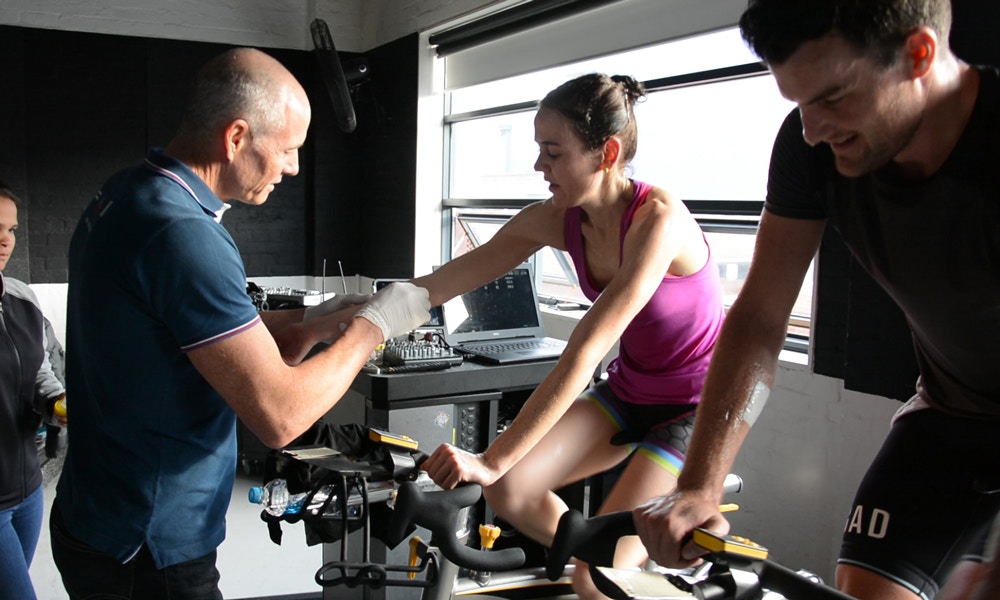 Founder and CEO of Shotz Sports Nutrition, Darryl Griffiths has for the past 20+ years has helped athletes customise their sports nutrition to overcome cramping and stomach issues which have led to poor performance. To give us an idea of what factors contribute to sporting outcomes, the BikeExchange team underwent a sweat test involving a 60-minute tempo effort that recognises individual rates of sweat and the sodium concentration of your sweat.

This information is invaluable for any endurance that has experienced such issues, but also for every endurance athlete so they can customise their nutrition and move away from a one size fits all approach.

Our Team Works Up A Sweat

To kick things off we met Darryl at Cycles Collective. Before we started our test, sweat patches were placed on our forearms with the goal of collecting 1 ml of fluid for analysis.

What Does Your Sweat Say About Your Performance in Cool or Hot Conditions? See also: What is more important? You genes or your training?

This means Person A can usually afford to take on less fluid and sodium, and they;re not putting their stomach under as much stress as person B. However, there are some advantages to having a high sodium concentration and high sweat rate; according to Darryl's theory these people will generally perform very well in cooler conditions.

Understanding the amount of loss you are experiencing is vital, and not just in the form of sodium. Knowing your sweat rate is also of the utmost importance. So - back to our sweat test experience. We are weighed (naked with the drink bottle we will be using during the test in hand), to get a specific number of fluid loss during the test. This figure will tell us the amount of fluid we lose (specific to test conditions), again enabling us to customise our fluid intake during an event.

As we will discover later, Brooke and I had almost 300% difference in our results.

See also: What are the power vs. weight values in the pro peloton? We ask OGE for answers

The conditions are kept as controlled as possible,with the room temperature set at 18 degrees with 50% humidity. Our effort level was also controlled, Brooke and I both working off wattage to sustain a constant effort. Brooke worked at an average wattage of 166 and I worked at an average wattage of 200. The idea with the effort is to keep as close to a race situation as possible.

See also: What is the psychology behind suffering and how can you improve it?

From a cycling point of view most races are not a consistent effort, and instead require lots of smaller sprints or surges to stay in touch or break the race up. Darryl talks us through this unique situation and again the word customisation comes to mind. Sitting in a group doing 40 kph at minimal effort will require far less in the way of nutrition and fluid, so adjust according. Conversely if you are in the breakaway or rolling turns, you can expect to require a far greater fluid and calorie intake. At the completion of the test, we are glad the hour is up (neither of us are good at sitting still for long periods). There are pools of sweat on the floor and our sweat patches are carrying far more than the required 1 ml of fluid. We dismount, dry off, remove our clothing and weigh ourselves, but not before taking bets on who had the greater sweat rate and sodium concentration.

The analysis of the results was intriguing for so many reasons.

Our sodium concentrations turned out to be almost identical.

Our sweat rate however, was remarkably different.

As a result, even though our sodium concentration rates were almost the same, I was losing 1381 mg of sodium per hour compared to 411 mg for Brooke.

All of these values are applicable to the specific conditions we were under, 18 degrees, 50% humidity at a specific wattage, but can be performed under different conditions if you want a very specific value, or you can alter your figures slightly to take into account varying conditions and effort levels.

From these results, Brooke and I can pull out very specific values for our training and racing. We know what mark we need to hit for fluid intake, sodium loss and caloric expenditure.

The key to sports nutrition is minimising your percentage of loss. A limiting factor in sports nutrition is the stomach's ability to take on and absorb what we put into it, so as well as knowing our numbers, we also need to know what our stomachs can tolerate, which Darryl talks about with as much importance as anything he has taken us through so far. Testing in training is imperative and testing at race pace or intensity is equally as important. With so many variables, (heat, wind, intensity, duration etc...) being able to make decisions on the run based on these factors could prove the difference between a PB or a DNF.

The approach to separating food, sodium and calorie intake is a logical one. If you had your fluid and nutrition separate, you could take on as much or a little fluid as required, whilst being able to control you calorie intake. Simple and logical.

In our debrief session with Darryl, he outlines some specific examples from his athletes and gives us an indication of the variables within individuals.

Having a better understanding of your sweat rate and the concentration of sodium that is in your sweat will allow you to properly address your individual needs. It will also answer some questions as to why you may have struggled in certain conditions.Over the years having analysed well over 500 tests the disparity in sweat rates and sodium concentration in sweat has been eye opening.

More recently an athlete who is training for Kona Ironman World Championships, a race known for its brutal conditions, recorded a sodium concentration of 356 mg of sodium per 1 litre of sweat.

This is a very low number and very exciting!

This allows the athlete to manage their losses far better than someone with a higher sodium concentration in their sweat. Even if this athlete was losing 2 litres of sweat per hour the accumulative loss of sodium per hour would only be 712 mg.

At the other end of the spectrum, the highest recording that I have seen is 2248 mg of sodium per 1 litre of sweat

This is quite manageable if the athlete is losing only 1 litre of sweat per hour but if their sweat rate increased, for example 2 litres per hour in hot/humid conditions, their sodium loss would be 2 litres per hour X 2248 mg of sodium per 1 lire of sweat = 4496 mg of sodium per hour. Big difference between the accumulative loss of sodium between the two athletes and even if their sweat rate is the same the athlete with the lower sodium concentration in their sweat will be able to manage losses so much easier. An athlete with a low sweat rate and low sodium concentration in their sweat will naturally prefer and perform better in hot/humid conditions than an athlete who is similarly conditioned but has a higher sweat rate and greater accumulative loss of sodium. The stomach can only tolerate a certain volume of fluid and concentration of sodium and the key to a sound nutrition strategy is to bridge the gap between losses and the stomach’s tolerance as best you can without compromising the stomach.

Nor is it geographically specific. Even twins that I have tested had varying results.

Having tested and worked with some high level cycling teams over the years, the rider's sodium concentration and sweat rate is crucial information team management can use to determine which riders are best suited to which races. Riding in Asia for example where conditions are normally hot and humid, having riders with low sodium concentrations and low sweat rates will put the team at an advantage straight away. This becomes even more crucial over multi-day stages.

Thanks to Chris, Adam and the team at Cycles Collective for letting us invade their space.