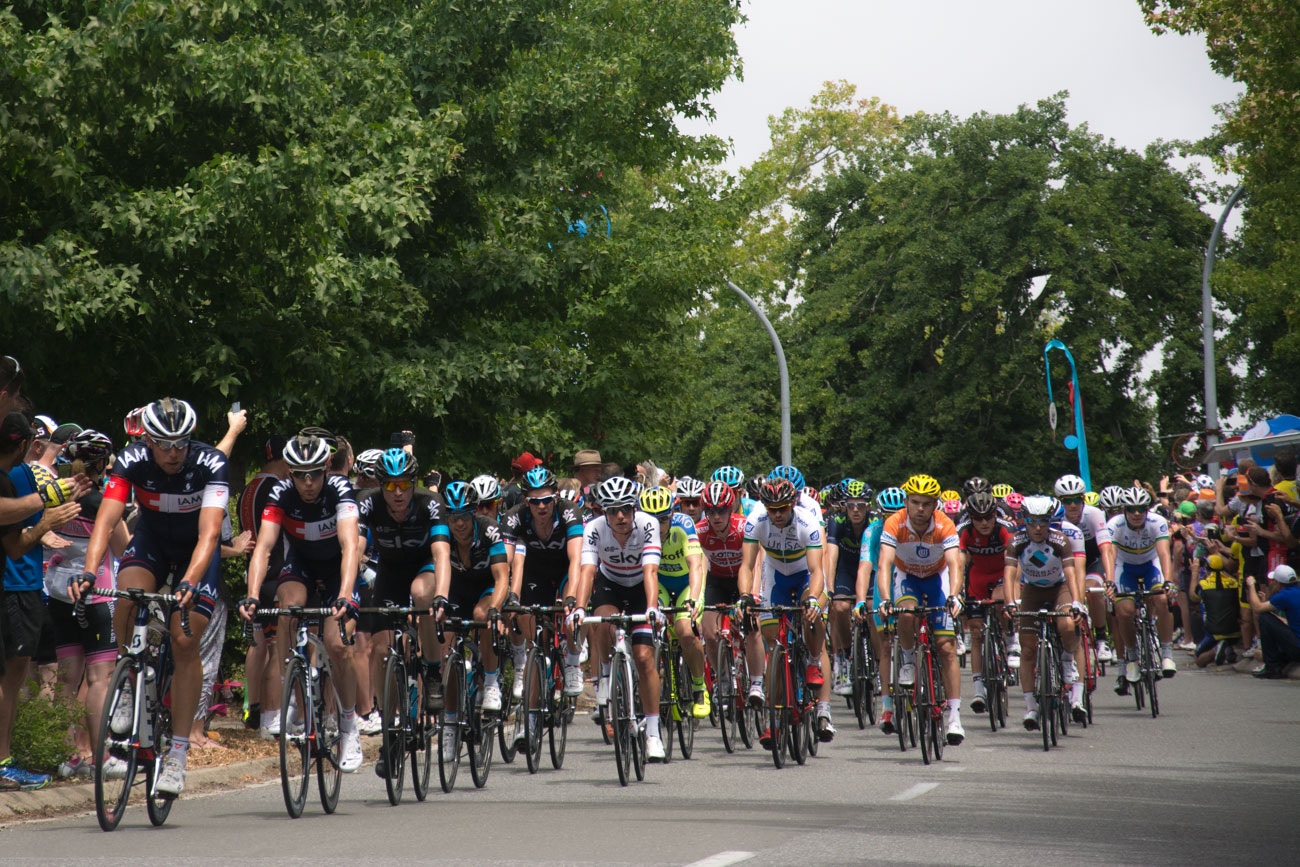 An aggressive peloton rolled out of Unley for the very difficult and undulating southaustralia.com stage 2.

Fired up from their missed opportunity yesterday, the peloton’s pace was red hot from the get-go. Multiple escape attempts were immediately shut down, and the pace so hot that in the early stages riders were being spat out the back and the main group splintered time and time again.

After a hectic first 30 minutes calm was restored with a small breakaway group of three riders being allowed to go up the road. Campbell Flakemore of BMC Racing Team, Cameron Meyer of Orica-GreenEDGE and Thomas De Gendt of Lotto Soudal opened up a reasonable gap, extending to almost three minutes shortly before the category 2 Subaru King of Mountain climb up Basket Range. Team Sky were again a strong presence at the front of the peloton with UniSA-Australia honouring the Santos Tour Down Under Leader’s jersey and contributing to the chase.

The only Subaru King of the Mountain points on offer today were comfortably taken out by Thomas De Gendt who led the two Aussie boys up the climb and powered away as they neared the top. Campbell Flakemore crossed in second and Cameron Meyer followed in third.

The group remained together leading into the first iiNet intermediate sprint, but quickly showed their hand, each man in the break trying to take maximum points. Thomas De Gendt was again too strong, holding a long sprint effort to narrowly take the victory over Cameron Meyer and Campbell Flakemore.

Back in the main group Team Sky were marshalling the troops ensuring the pace was high to keep their man Richie Porte safe and out of trouble. As the peloton got closer to the laps of Sterling, IAM Cycling joined the party and began to chip away the breakaways advantage. It wasn’t too long before the peloton became one stretched out line as the average speed approached 55kph. Clearly intent on destruction today the peloton kept driving the pace, knocking the lead down to under 2 minutes.

The second iiNet intermediate sprint was again won by Thomas De Gendt, showing his class and early season form by riding the young Campbell Flakemore off his wheel as he accelerated away to take maximum points. Cameron Meyer started his sprint too late, but it was still enough to cross in second and pick up some handy points and potentially crucial seconds.

Once the laps of Stirling began, the gap stabilised momentarily at 2 minutes as the heat came out of the chase. This didn’t last very long though, as IAM Cycling and Team Sky renewed their collaboration to bring the breakaway back together. In no time at all the time gap was obliterated and with 24kms to go the peloton reformed. As always, this reformation led to counter attacks, this time Calvin Watson of TREK Factory Racing and Danilo Wyss from BMC Racing Team tried their hand at a cheeky move, that had legs but was ultimately futile.

Almost every team tried their hand at controlling the pace at the front, UniSA-Australia, IAM Cycling, Team Sky, Team Cannondale – Garmin, all of them quickly over run. Team Cannondale – Garmin took the peloton to within 1km of the finish for their man Nathan Haas. The Australian opened up the sprint very early, too early as it turned out with Daryl Impey taking up the charge still with 200m to go. He too began to falter within sight of the line as the Movistar Team rider Juan Jose Lobato proved strongest on the tough run to the line taking the victory over a fading Daryl Impey and Gorka Izagirre. An extremely tough day of racing rounded out by an equally tough finish.

"It's a victory on a different type of terrain for me," said Lobato.

"I'm coming here in good form, but thanks to God, I was able to deliver victory for the team," he said. "We have a great team here, we're always at the front at every race we go to. I am very content to start the season like this and I am grateful for my team...I've had two years of good results, and I couldn't start off 2015 any better."

A great day for Movistar Team, first and third on the stage and also moving into second position overall. Hats off to Jack Bobridge who finished with the main group and retains the Santos Tour Down Under Leader’s jersey. Great signs as well for Cadel Evans who finished 5th on the stage. The day did however, finish on a far more upsetting note for Evans' teammate Campbell Flakemore, who apparently crashed on a post race descent whilst heading back to the city centre. He's suffered a broken left collarbone and is now out of the race.

The Thomas Foods Stage 3 preview can be found here.

Santos Tour Down Under Jersery Holders