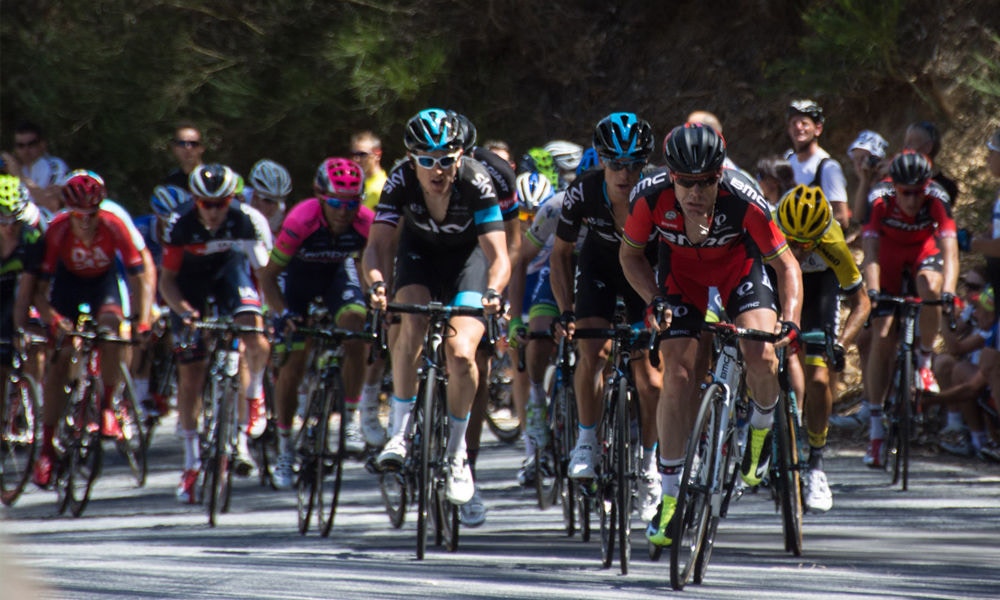 There was no let up for the peloton today, beginning the Thomas Foods stage 3 with heavy legs from a hard days racing yesterday and expected temperatures of over 30 degrees. The dramatic pictures of the peloton sweeping through bushfire ravaged areas set the tone for today’s stage, which promised to be a memorial one given the undulating terrain and first real hill top finish in the Santos Tour Down Under.

The peloton were again attentive to start the race and it took a lone escape attempt from Drapac Professional Cycling’s Will Clarke to finally create a move that stuck. William was joined shortly after by Lasse Norman Hansen of Team Cannondale – Garmin, Calvin Watson of TREK Factory Racing and Axel Domont of AG2R La Mondiale. These four quickly stretched their lead out to over 3 minutes.

All the action started once the race entered Lobethal, with the all three iiNet intermediate sprints of the day to be decided here on the roads of Lenswood, Woodside and Charleston. A motivated William Clarke showed his breakaway compatriots a clean pair of heels for the first iiNet intermediate sprint taking the points over Lasse Norman Hansen and Axel Domont.

The second iiNet intermediate sprint was a carbon copy of the first with William Clarke taking the victory over Lasse Norman Hansen and Axel Domont. Following the second sprint the breakaway kept the piling the pressure on and it seemed to put Axel Domont into the red as he was dropped from the break with 38km to go.

The strong tempo remained as the breakaway’s advantage yo-yoed between 2:30 and 3minutes. It was a familiar story back in the peloton with Team Sky and UniSA-Australia doing all the heavy lifting at the front.

Approaching the third iiNet intermediate sprint of the day Lasse Norman Hansen was really beginning to struggle with the heat, salt building up on his jersey and lead building up in his legs. He waved the white flag to William Clarke who took the sprint uncontested. That made it three out of three to William Clarke and curiously three out of three sprints that Calvin Watson hadn’t had any interest in, perhaps saving his legs for the difficult finish. Almost immediately following the third iiNet sprint, the time gap began to plummet due to a combination of fatigue setting in to the breakaway, and the GC teams of the peloton being extremely motivated to get their leader to the base of the climb in a good position.

With 12km to go, you could be forgiven for thinking you were watching the finish on the Champs-Elysees, with Team Giant-Alpecin, BMC, UniSA-Australia and Orica-GreenEDGE all lining up across the road, full gas! It was a remarkable sight as Team Giant-Alpecin, Team Sky and IAM Cycling owned the front of the race as the kilometres whittled down one by one approaching the final climb.

BMC Racing Team delivered Cadel Evans in the number one position at the foot of the climb closely followed by Richie Porte. From then it was absolute fireworks! Richie Porte’s teammate Geraint Thomas quickly made his way to the front of the race to pilot his leader up the climb and make it as hard as possible for others to attack. With 1.2k to go Richie Porte tried his hand at an attack that was quickly shut down by Cadel Evans, who looked in complete control. Four riders separated themselves from the others, Cadel Evans, Richie Porte, Domenico Pozzovivo and Tom Dumoulin. These four attacked each other time and time again, trying to see who would crack first. This to and fro allowed what was left of the peloton to bridge across. It was at this point that Rohan Dennis exploded from the group and quickly gapped the field. Tom Dumoulin tried to close it down, but Rohan Dennis had too much power and this left Dutchman in no man’s land. Rohan Dennis carried his momentum to take the victory and open up a time gap on the rest of the field. It was a perfect day for BMC Racing Team with Cadel Evans having plenty left in his legs to cross for second. Tom Dumoulin held on for third.

After a heartbreaking finish yesterday for the BMC Racing Team , with the young Campbell Flakemore suffering a broken collarbone, this was the perfect result for the team. BMC Racing Team have a stage victory and now hold down position one and two on the Santos Tour Down Under Leader board.

Find out more about the Bupa Stage 4 course here.

Time of the winner:

For the latest news & reviews check out the BikeExchange blog.