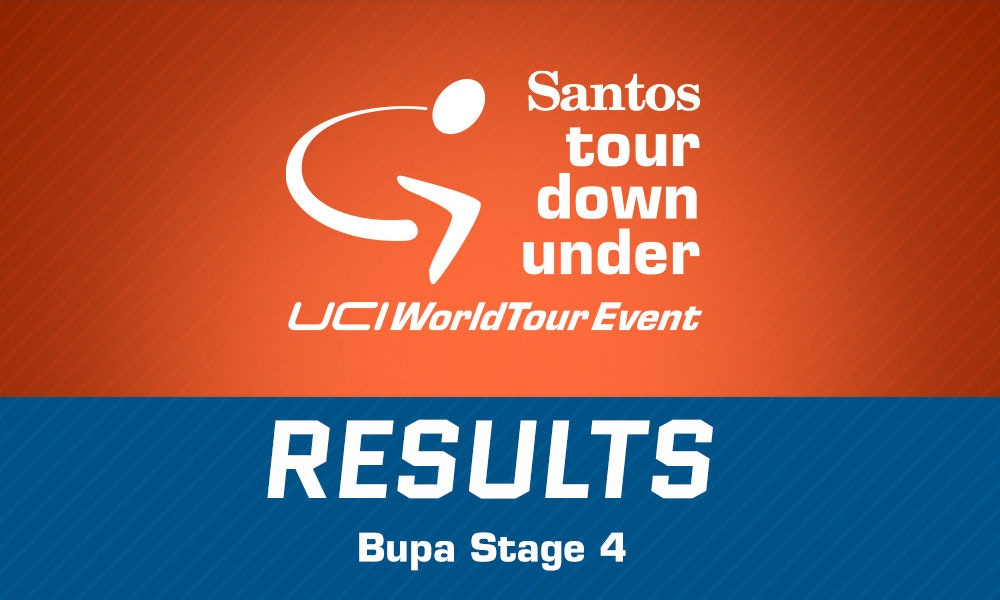 Although billed as a day for the sprinters, an early climb out of Glenelg followed by the climb up Sellicks Hill for Subaru King of the Mountains points and a gradual ascent towards the second iiNet intermediate sprint of the day ensured that it was going to be another tough day in the saddle.

Again the breakaway took a long time to form, finally being made up of Jack Bobridge of Uni-SA-Australia, Michael Hepburn of Orica-GreenEDGE, Peter Kennaugh of Team Sky and Cedric Pineau of FDJ.

Nathan Haas worked hard to bridge across to the group after a previous attempt was thwarted by a puncture, but this attempt proved a bridge too far. Haas began to drift back to the peloton, and was finally put out of his misery by another puncture. Clearly it was not to be his day.

The breakaway established itself with a 2 minute lead heading into the only Subaru King of the Mountain contest for today. The only man in the breakaway interested in the points was Jack Bobridge, and he was allowed to roll over in first place with Michael Hepburn, Peter Kennaugh and Cedric Pineau sitting on his wheel. As soon as the job was done Bobridge sat up and rolled back to the peloton having secured the Subaru King of the Mountains jersey for tomorrow’s BikeExchange stage 5.

To the surprise of many, the breakaway group was brought back very early with 77km still remaining in the stage. Clearly the teams with the sprinters that have been MIA so far wanted their time in the sun. This meant that the first iiNet intermediate sprint of the day would be a hotly contested one.

Orica-GreenEDGE lit up the run into the sprint with Daryl Impey taking the points and bonus seconds from Luke Rowe of Team Sky and Mark Renshaw from Etixx – Quick Step. From there the already high intensity increased further as the peloton became one long line.

A second breakaway of the day formed quickly following the first iiNet intermediate sprint that consisted of Ruslan Tleubayev of Astana Pro Team, Peiter Serry of Etixx – Quick Step and Maxim Belkov of Team Katusha trying his hand at a second breakaway of the Santos Tour Down Under. Their advantage quickly grew to almost 2:30 minutes as the teams of the peloton looked at each other to initiate the chase.

The pace of the breakaway leading into the second iiNet intermediate was high, but this was more to try and stay away as opposed to gaining points in the classification. Maxim Belkov rolled over in first position unchallenged as the three escapees drove on. The pace proved too much for Ruslan Tleubayev who was eventually dropped with 22km to go.

Drama back in the peloton as Marcel Kittel fell away and drifted back to an insurmountable length of time for him to recover and contest the win. Movistar Team stated their intentions to try for a stage victory, quickly closing down what was left of the breakaway. With a shade under 10kms left the race was back together and the long lead into the sprint was on.

With 8km to go Lars Boom launched his team leader Luis Leon Sanchez into the lead and along with Gorka Izagirre tried to pinch a victory. Closed down with 5km to go, Orica-GreenEDGE kept the pressure on trying to get their man Daryl Impey up for the stage win. They were joined by IAM Cycling pushing on for Henrich Haussler. Without the shadow of Marcel Kittel looming over the peloton, the victory was up for grabs.

The huge drag to the finish line meant the pace was upwards of 70kph and riders were being shelled left and right. Drapac Professional Cycling’s Wouter Wippert opened up the sprint and looked strong, but UniSA-Australia rider Steele Von Hoff followed him through the gaps, came off his wheel with all the momentum and crossed for the Bupa stage 4 victory. All the work done by Orica-GreenEDGE was rewarded with a second place to Daryl Impey while Wouter Wippert had enough speed to hold on for third. Unfortunately a huge crash just before the finish line brought down large sections of the peloton leaving a lot of riders worse for wear leading into tomorrow tough BikeExchange stage 5 up Willunga Hill.

A great Santos Tour Down Under continues for UniSA-Australia with a second stage victory and a lead in the Subaru King of the Mountain jersey.

Click here to see our preview of the BikeExchange Stage 5.

Get the latest news at our blog