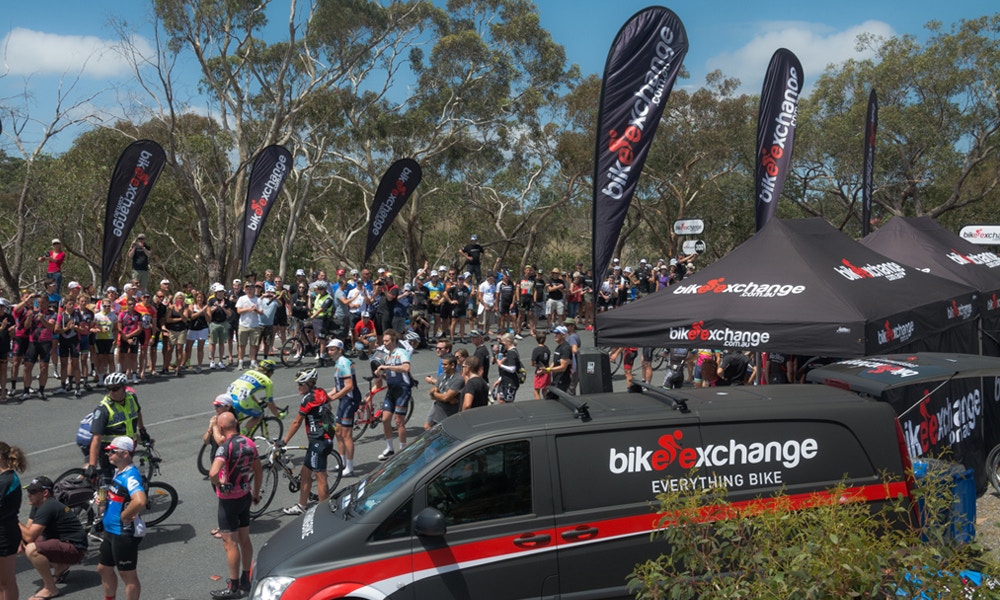 Here it is, the BikeExchange stage 5 of the Santos Tour Down Under. Without doubt the most highly anticipated stage of this year's Tour and with the race for Ochre positioned as it is, even more so.

History tells us that no rider with the Santos Tour Down Under Leader’s jersey going into the stage at Willunga Hill has managed to hold onto it. Can the young heir to the BMC throne defy history and finish the day still leading this race? Will Cadel Evans attack or ride in defense of his young teammate? Will Richie Porte produce another Willunga Hill classic and take the BikeExchange stage victory as well as the leader's jersey?

So many questions will be answered today.

Keen to cement his first place position on the Subaru King of the Mountain jersey, Jack Bobridge broke away from the gun. His first attempt was nullified, but along with Jordan Kerby of Drapac Professional Cycling and Kiwi strongman Greg Henderson of Lotto Soudal, the breakaway for the day was formed.

The trio's advantage got out to more than 5 minutes with nobody in the peloton too keen to bring them back in. BMC finally moved to the front sensing the danger and kept the advantage within reach.

The first and second iiNet intermediate sprints were a tame affair, neither being contested. Jordan Kerby was allowed to roll through for the first sprint and Henderson taking the second. On both occasions Bobridge rolled to the back of the group, hoping to win some brownie points with his breakaway compatriots. No doubt hoping they could help carry him to the bottom of Willunga Hill with enough advantage to secure maximum points in the Subaru King of the Mountain competition.

Unfortunately Jordan Kerby the young rider from Drapac Professional Racing was spent following the second iiNet sprint and drifted back to the peloton.

With so many riders still in contention for overall victory the pace approaching the first climb up Willunga began to rise sharply, averaging close to 53kph! In a great sign of sportsmanship, Henderson acting as domestique for Bobridge in the final few kilometers, gave him one last ‘madison’ swing to gain every advantage possible to get up Willunga in first place and confirm his status as the winner of the Subaru King of the Mountain jersey. Chapeau Henderson, who would have won lots of fans today!

As expected a strong tempo was set from the foothills of Willunga Hill, Astana Pro Team stringing out the peloton, leaving a select group at the top. Incredible scenes of people 7 and 8 deep across every inch of the climb would have sent chills through the riders.

The pace didn’t let up on the descent, with an average speed of 87.8kph.

Amazing breaks formed in the peloton with 8km to go. Astana Pro Team pushing so hard they caused a massive split, sending Team Sky into panic mode as both Cadel Evans and Rohan Dennis managed to stay with the lead group. Calm was restored as the group came back together with 4.5km to go, just in time to launch up Willunga Hill for the last time.

Geraint Thomas was the pace maker on the early stages of Willunga setting a blistering tempo, handing over to Cameron Meyer with 2km to go who continued to stretch the field.

With 1.2km left Richie Porte went with everything he had. Initially the attack was covered but that effort proved too much for Evans who lost his wheel only 100m later. The only man that was able to stay with Porte was Dennis fighting to hold on to his Ochre leader's jersey. Porte drove on, standing up out of the saddle and turning himself inside out trying to crack Dennis, and with 300m to go it worked. The young BMC rider wasn’t defeated but simply couldn’t match the power of Porte who for the second year in a row takes the stage victory on top of Willunga Hill. Dennis hung on for second on the day and managed to keep his Santos Tour Down Under leader’s jersey by 2 seconds.

Another epic day on Willunga Hill punctuated by another Aussie stage win and an insight to the future of Australian cycling.

Get the latest news at our blog

See the Be Safe Be Seen MAC Stage 6 preview here.